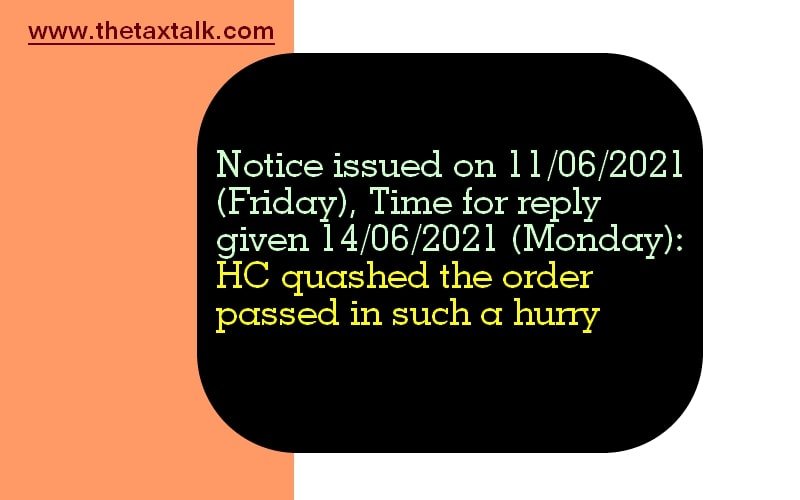 HC quashed the order passed in such a hurry

DCIT  [W.P.(C) 6168/2021, Order Dated – 07/07/2021] has quashed the scrutiny assessment order passed in a hurry. In a case before HC, Show  Cause Notice was issued on 11.06.2021 (Friday) & time given for reply was upto 14.06.21(Monday). The court held that the time frame set out in the show cause notice dated 11.06.2021 was extremely narrow, and that the e-filing portal was dysfunctional – these are good enough reasons for us, to set aside the impugned assessment order, with liberty to the AO to continue the assessment proceedings from the stage at which they were positioned when the show cause notice dated 11.06.2021 was issued. It is ordered accordingly. The HC held that it caused infraction of its legal rights.

W.P.(C) 6168/2021 & CM APPL. 19553/2021 [Application filed on behalf of the petitioner seeking stay on the operation of the impugned assessment order and consequential actions]

2.1. Mr. Agarwal says that, in view of the directions that we intend to issue, he does not wish to file a reply, and therefore, will argue the matter based on the record presently available with the Court.

4.1. Besides this, challenge is also laid to the notice of demand dated 15.06.2021, issued under Section 156 of the Act, and consequential penalty proceedings initiated against the petitioner.

5.3. The record shows that, as on previous occasions, a show cause notice was served on the petitioner, on 11.06.2021, at about 5:44 P.M. To be noted, 11.06.2021 was a Friday. The said show cause notice, issued under Section 142(1) of the Act, required the petitioner to furnish confirmation(s) and audited financial statements of non-residential investors mentioned therein. The petitioner was also called upon to show cause as to, why the foreign remittances received from the investors named therein should not be treated as unexplained income and added to the petitioner’s returned income under Section 68 of the Act. The petitioner was, however, given time only till 11:00 A.M. on 14.06.2021, which was a Monday.

5.7. The petitioner asserts that, since not only the timeframe given to respond to the show cause notice, dated 11.06.2021, was short but also the fact that the e-filing portal was dysfunctional, it caused infraction of its legal rights.

5.8. Furthermore, it is also asserted by the petitioner that, the respondent/revenue, in his haste, to pass the assessment order has failed to take notice of the fact that the petitioner had filed a loss return, in which, loss to the extent of approximately Rs.102 crores was declared.

5.9. In other words, according to the petitioner, assuming without admitting that, the addition made by the Assessing Officer (in short „AO‟) was tenable, it had to be adjusted against the loss claimed by the petitioner.

6.1. According to him, the petitioner has kept back, if not full, some bit of the information. By way of an example, Mr. Agarwal has drawn our attention to the fact that, the Foreign Inward Remittance Certificates (FIRC) concerning GMO Global Payment Fund Investment Partnership [in short “GMO”] has not been furnished to the AO.

7.1. Mr. Chopra says that, insofar as the FIRC concerning GMO is concerned, the same was not sought, and therefore, perhaps, was not furnished. It is Mr. Chopra’s submission that, this information can also be furnished to the respondent/revenue along with the information sought for in the show cause notice dated 11.06.2021.

8.1. We are of the view that, given the fact that, the timeframe set out in the show cause notice dated 11.06.2021 was extremely narrow, and that the e-filing portal was dysfunctional – these are good enough reasons for us, to set aside the impugned assessment order, with liberty to the AO to continue the assessment proceedings from the stage at which they were positioned when the show cause notice dated 11.06.2021 was issued. It is ordered accordingly.

8.2. We may also clarify that the respondent/revenue will be at liberty to call for further information, if thought necessary, before proceeding to frame the assessment order. In particular, the petitioner will furnish the FIRC concerning GMO, which is presently not on record.

8.3. Furthermore, Mr. Chopra assures us that the petitioner will render assistance in every form to the respondent/revenue in passing the fresh assessment order. The statement of Mr. Chopra is taken on record.