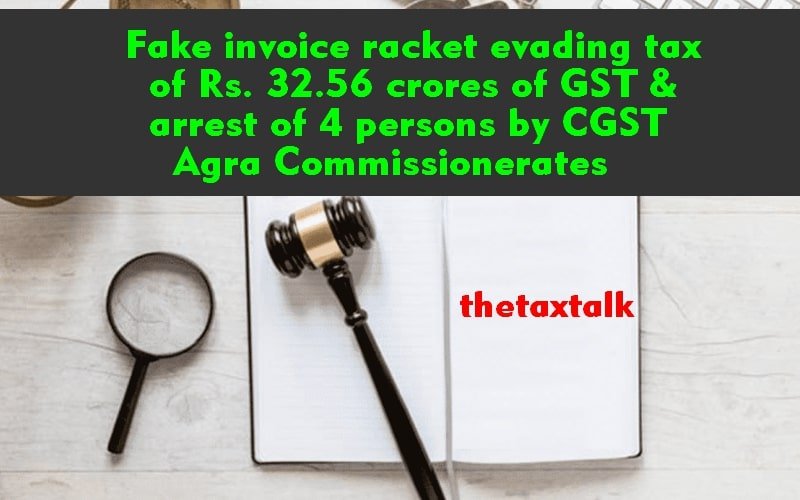 Acting upon the intelligence developed by the Anti-Evasion Branch of CGST Agra, an investigation was initiated against M/s G.S. Traders (GSTIN-09BRCPG1186M1ZJ) Agra, whereby it was found that the firm was non-existent and involved in passing on ITC fraudulently without having any inward supplies. Accordingly, supply chain analysis were done and noticed that a number of the firms have been found registered on specific PAN No. , Mobile No and found non-existent during physical verification_ In relation to that searches were carried out at the business premise and residential address of Shri Varun Gupta, Proprietor of M/s Vermil Consultancy(GSTIN-09ALIPG2017Q1ZU), Shri Vikas Agarwal, Proprietor of M/s Vikas Iron Traders. Shri Sunil Rathore. Proprietor of S.K.R. Enterprises(GSTIN-09AYTPR902P2Z3).

During the searches incriminating documents like Cheque Books, Bank Pass book, Electricity Bills, Rent Agreements of different peoples and firms, Rubber Stamps related to the fake firms and gadgets like Mobile Phones, Laptops etc. were recovered from all the premises.

Further, Statement under Section 70 in respect of proprietors of above three mentioned firm and one other person namely Shri Rishabh Mittal, Proprietor M/s Agravan Trading Company were also recorded. In their statements they all have revealed that they are involve in creating fake firms, receiving and supplying tax invoices without supply of goods and thus passing the fraudulent ITC.

The Modus Operandi inter alia involved in the case is creating of fake firms on the basis of identity proof and other documents collected from under-privileged persons, issuance of fake invoices without actual supply of goods to pass on huge inadmissible ITC to recipient firms and availment of inadmissible Input Tax Credit passed on by suppliers which were also bogus/non-existent.

It is pertinent to mention that to maneuver the huge amount generated through issuance of fake invoices, they have created and registered firms with same name but different proprietors also with other departments like Labour Department and Mardi Samiti etc, and opened various current bank accounts resembles with the name of bogus GSTIN firms.

The Whole operation unearth total 95 fake firms involving Taxable Value of Rs. 184.56 Crores approximately involving fake ITC of Rs. 32.56 Crores by issuing fake invoices for various commodities like Iron Scrap, Cement, Grit etc., thereby causing loss to Government Exchequer by evasion of GST. Quantum of the fraud and number of firms involved are likely to go up in future. The above mentioned all four persons have admitted their involvement in this whole racket and their acts have been corroborated from the records/ evidences recovered during the searches, from verification by E-way Bills/GSTIN data and other tools available with the Department.

Thus, Shri Varun Gupta, Shri Vikas Agarwal, Shri Sunil Rathore and Shri Rishabh Mittal, have committed offences under Section 132(1)(b)8 (c) of CGST Act 2017, which is punishable with the imprisonment for a term which may extend to five years with fine. The Offences committed by them are cognizable and Non-Bailable. Therefore, all four persons have been arrested on 18 08.2021 under Section 69 of CGST Act 2017 and produced before the Hon’ble Special CJM Agra on 19.08.2021, who sent all four accused to the judicial custody for 14 days.