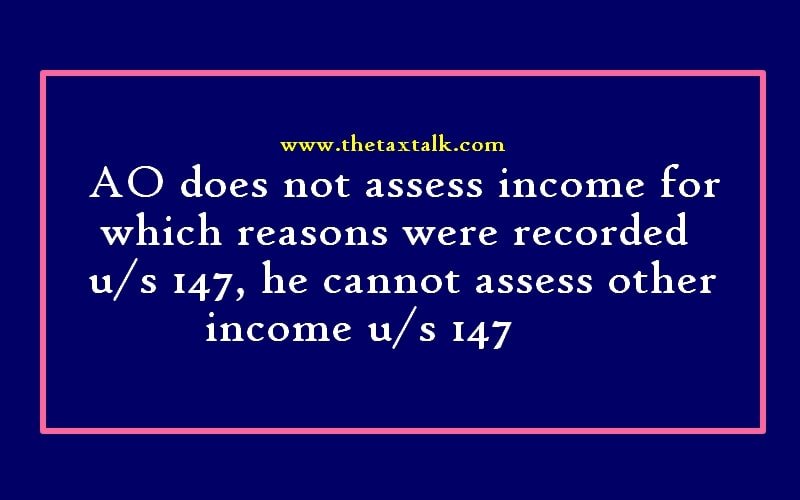 In the department’s appeal in CIT vs. Jet Airways (I) Ltd, had occasion to consider the question whether if the AO issues a notice u/s 148 to assess/ reassess a particular item of income but does not assess/reassess that income, is it open to the AO to assess any other item of income.

(i) S.147 provides that the AO may assess the income which has escaped assessment “and also any other income chargeable to tax which has escaped assessment and which comes to his notice subsequently in the course of the proceedings under this section”. Explanation 3 to s. 147 inserted by F (No. 2) Act, 2009 w.r.e.f 1.4.1989 provides that the AO “may assess or reassess the income in respect of any issue … notwithstanding the reasons for such issue have not been included in the reasons recorded …”

(ii) The words “and also” indicate that reassessment must be with respect to the income for which the AO has formed an opinion and also in respect of any other income which comes to his notice subsequently. However, if the AO accepts the objection of the assessee and does not assess the income which was the basis of the notice, it is not open to him to assessee income under some other issue independently;

(iii) Explanation 3 to s. 147 was inserted to supersede the judgements in Vipin Khanna 255 ITR 220 (P&H) & Travancore Cements 305 ITR 170 (Ker) where it was held that the AO could not assess income in respect of issues unconnected with the issue for which the notice was issued. However, Explanation 3 does not affect the judgements in Shri. Ram Singh 306 ITR 343 (Raj) & Atlas Cycle Industries 180 ITR 319 (P&H) where it was held that if the AO accepted that the reasons for which the notice was issued were not correct, he would cease to have jurisdiction to proceed with the reassessment;

(iv) Explanation 3 lifts the embargo inserted by judicial interpretation on the making of a s. 147 assessment in respect of items not referred to in the recorded reasons. However, it does not and cannot override the substantive part of s. 147 that the income for which the notice was issued must be assessable.