When an appeal provision has been provided under the statute, the Authorities are not allowed to recover the amount payable unless there are extenuating circumstances. 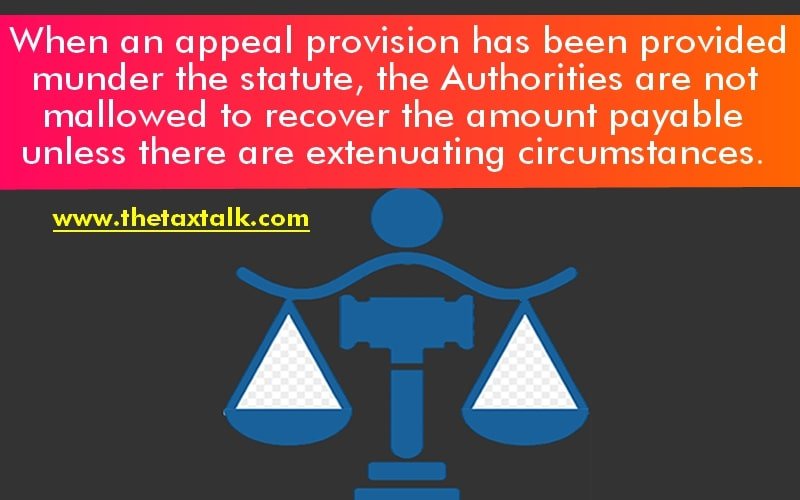 When an appeal provision has been provided under the statute, the Authorities are not allowed to recover the amount payable unless there are extenuating circumstances.

IN THE HIGH COURT OF CALCUTTA

In favour of assessee

This writ petition has been filed by the petitioner under article 226 of the Constitution of India wherein the petitioner is aggrieved by the recovery of Rs. 1,41,10,717 subsequent to passing of the Orders, dated 30-9-2019 and 18-10-2019 by the First Appellate Authority.

2. Learned Counsel appearing on behalf of the petitioner submits that he has a right to file an appeal before the learned Tribunal under section 112 of the West Bengal Goods and Services Tax Act, 2017 (hereinafter referred to as the said Act). He further submits that this appeal is required to be filed within three months of passing of the order by the First Appellate Authority and the appeal is admissible by the learned Tribunal upon payment of 20% of the remaining amount of tax in dispute.

3. Learned Counsel for the petitioner again submits since there is no Appellate Tribunal, this writ petition has been filed on 29-11-2019 before this Court.

4. It is trite law that when an appeal provision has been provided under the statute, the Authorities are not allowed to recover the amount payable unless there are extenuating circumstances. In the present case the dispute is with regard to classification issue, and therefore, I am of the view, the authorities have acted in haste in recovering the entire amount within the period of three months wherein there is a provision of appeal under section 112 of the said Act before the Appellate Court.

5. Mr. Abhratosh Majumdar, learned Additional Advocate General appearing on behalf of the State submits that since a provisional attachment was subsisting, the authorities after waiting for a period of over a month instituted the recovery proceeding and proceeded to recover the entire amount.

6. In my view, the authorities have a right to recover only a sum upto 20% as per section 112(8)(b) of the said Act. Anything over and above the same tantamounts to an excessive recovery made within the period of three months that is allowable for filing of appeal under section 112 of the said Act.

7. In the light of the same, the authorities are directed to remit the excessive recovery to the bank account of the petitioner within a period of 15 days from date.

8. It is made clear that the petitioner shall be able to operate its account and the order of attachment of the bank account shall stand cancelled.

10. Since, no affidavit-in-opposition has been called for, the allegations made in the application are deemed to have not been admitted by the respondents.

11. Learned Counsel appearing for the respondents prays for time to file affidavit-in-opposition in the main writ petition.

12. Accordingly, let affidavit-in-opposition be filed by the respondents within four weeks, affidavit-in-reply thereto, if any, be filed within two week thereafter.

13. Let this matter appear in the monthly list of cases for the month of March, 2020 under the heading ‘for hearing’.

Tags: the Authorities are not allowed to recover the amount payable unless there are extenuating circumstances.When an appeal provision has been provided under the statute