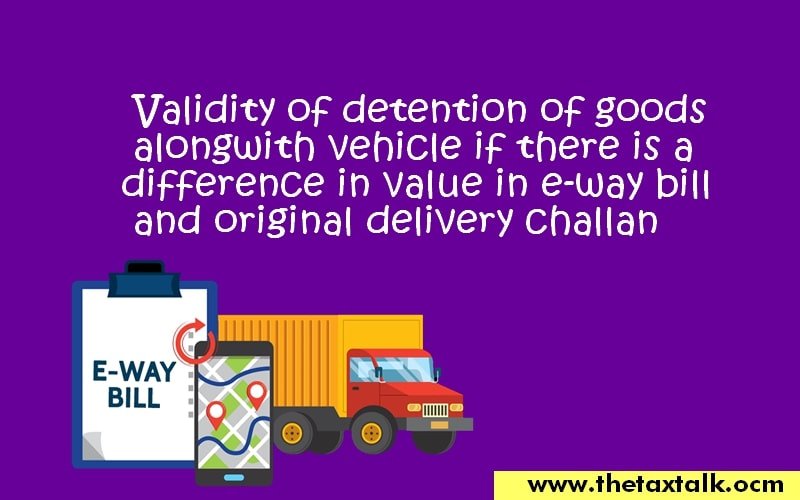 The petitioner has approached this Court aggrieved by Ext.P7 notice issued in FORM GST MOV-7 detaining a consignment of goods that was being transported from Salem to Ernakulam. The goods in question were detained at Walayar on 10-11-2020 and the reason for detention is seen as a mis-match in the value of the goods transported, as shown in the e-way bill and job work invoice that accompanied the transportation of the goods.

2. The facts in the writ petition would reveal that a consignment of HR plates was sent from Ernakulam to Salem for the purposes of job work. The onward transportation from Ernakulam to Salem was duly accompanied by a tax invoice and an e-way bill generated by the petitioner herein, and the goods in question reached Salem where they were subjected to job work by the job worker. After completion of the said work, the goods were returned to Ernakulam from Salem, and in the said leg of transportation, the consignment was accompanied by a job work invoice issued by the job worker in Salem as also an e-way bill generated by the job worker. The defect pointed out by the respondent is in respect of the e-way bill that accompanied the transportation from the job worker’s premises in Salem to the petitioner in Ernakulam. It is stated that the value shown in the e-way bill is only Rs. 3469.76 whereas, the consignment of the MS plates that was sent for job work was valued at Rs. 8,27,708.87. The said difference in the value is shown as the reason for the detention as the value shown in the e-way bill did not match the value of the consignment itself.

On a consideration of the facts and circumstances of the case as also the submissions made across the Bar, I am of the view that inasmuch as the detention of the goods was during the return journey from the job-workers premises to the petitioner’s premises, the documents that ought to have accompanied the transportation were the job work invoice, the delivery challan and the e-way bill. In the instant case, it is not in dispute that the consignment was covered by the job-work invoice, an e-way bill as also the delivery challan that originally accompanied the goods on its transportation from Ernakulam to the job worker’s premises in Salem. As per the statutory provisions, when goods are sent to other premises for job work, it is the same delivery challan that has to accompany the transportation for the onward and return journey as well. At any rate the objection of the respondents is only with regard to the value shown in the e-way bill that accompanied the goods on its return journey.

Tags: Validity of detention of goods alongwith vehicle if there is a difference in value in e-way bill and original delivery challan