Respected Hon’ble Prime Minister Sir, Why Infosys? Why not cancel the deal? Why not restore the old portal? 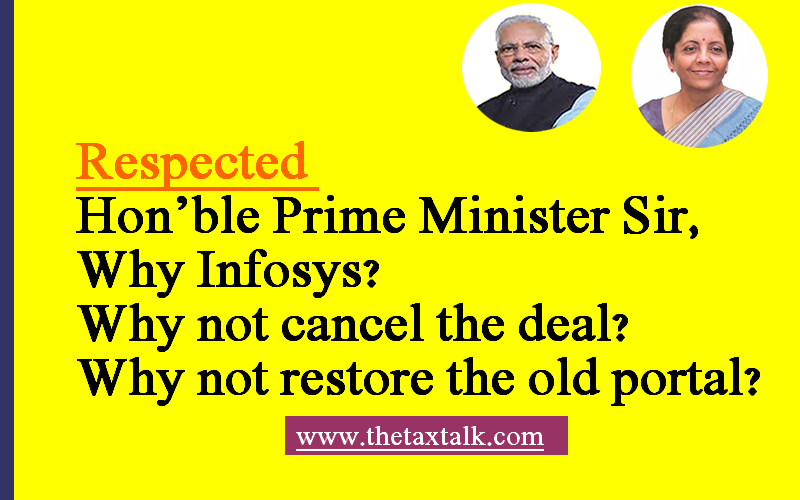 Respected Hon’ble Prime Minister Sir, Why Infosys? Why not cancel the deal? Why not restore the old portal?

Publicly, Infosys has announced that around 1 lakh ITRs were filed till 21st June 2021 on New Income Tax E-filing Portal whereas RTI application shows that the Government does not have any data of return filed? Whom are we protecting? Why are we protecting? Rs. 4242 Cr is a small sum for this contract?

Announcement of a new income tax portal was done much earlier and the working was stopped from 1st June to 7th June as the Government wanted to move to the new portal. Result? Why so much hurry to launch the new portal? Any homework was not required before scraping the old portal? Do we have to follow the trial and error approach at the National Level?

Despite around 50 days of stoppage, the issue still remains where it has started?

The question remains, why do we want a new income tax portal? Why not restore the old one? It will be a welcome move if the Government announces that the new portal has been scrapped and the old portal is restored.

The country knows it very well that Infosys has failed miserably in handling the GST portal as well. Giving the income tax portal to the same person is not a blunder?

For whom? Stakeholders consultation was not necessary before making a decision to shift to the new portal?

The RTI application reveals that the Government has not imposed any penalty on Infosys for Its poor & disastrous performance in website maintenance and implementation. Whether penalty or fine is meant only for small taxpayers? Hope, Rs. 4242 Cr is treated the same way a taxpayer is treated where a Rs. 10000 fine is imposed simply for replying to one single notice.

It was a well known fact that Infosys has failed miserably in the implementation of the GST portal, then why did they again assign the task of New income tax portal to Infosys? There were other competent players like TCS, Mind-tree, etc who may have been considered for the purpose.

By scrapping the new proposed portal, the Government may give a signal that the Modi Government doesn’t tolerate any nuisances in the tax administration. Not only Infosys, all those who were involved in the process need to be penalized severely for ill conceived ideas and implementation. Let the finance ministry act tough and hard against the persons who have made the country suffer for such an act of gross negligence.

It’s time for the Government to come clean by scrapping the proposal to move to the new income tax portal.

Tags: Respected Hon’ble Prime Minister SirWhy Infosys? Why not cancel the deal? Why not restore the old portal?