Release of shares in house property by co-owners in favour of one in lieu of obligation to pay cash, tantamounts to purchase for exemption u/s 54 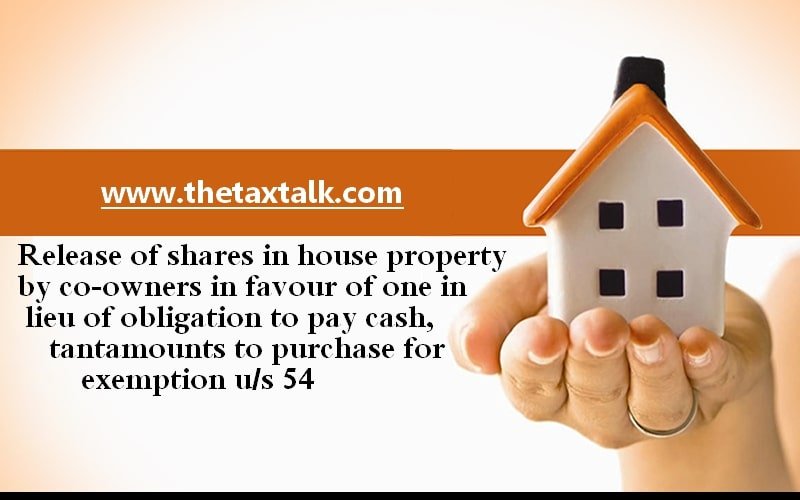 Release of shares in house property by co-owners in favour of one in lieu of obligation to pay cash, tantamounts to purchase for exemption u/s 54

Soli J. Sorabji with Miss A. Subhashini, for the Revenue : S.T. Desai with K.J. John & Mrs. A.K. Verma, for the Assessee

We regard the single point, persuasively presented by the learned Solicitor-General on behalf of the petitioner (The CIT, Andhra Pradesh), as deserving of a speaking order, although in dissent, since the question may arise again and needs to be silenced.

“There are no doubt to be found authorities and statutes which have extended that meaning. In Mr. T. Cyprian Williams’ book, the Contract of Sale of Land, at p. 3, he says:

Apparently he considered that a sale for something other than money can in a wider sense be properly described as a sale.”

We agree. The signification of a word of plural semantic shades may, in a given text, depend on the pressure of the context or other indicia. Absent such compelling mutation of sense, the speech of the lay is also the language of the law.

“Where ignorance is bliss,

A passing reference to avoidance and evasion of tax was made at the bar, a dubious refinement of a dated legal culture sanctified, though, by judicial dicta. The Court is not the mint of virtue and one day in our Welfare State geared to social justice, this clever concept of ‘avoidance’ against ‘evasion’ may have to be exposed. Enough unto the day is the evil thereof.