Payment of interest for delay in construction of flats by the assessee was in fact damages though termed as interest and no tax was deductible at source under s. 194A. 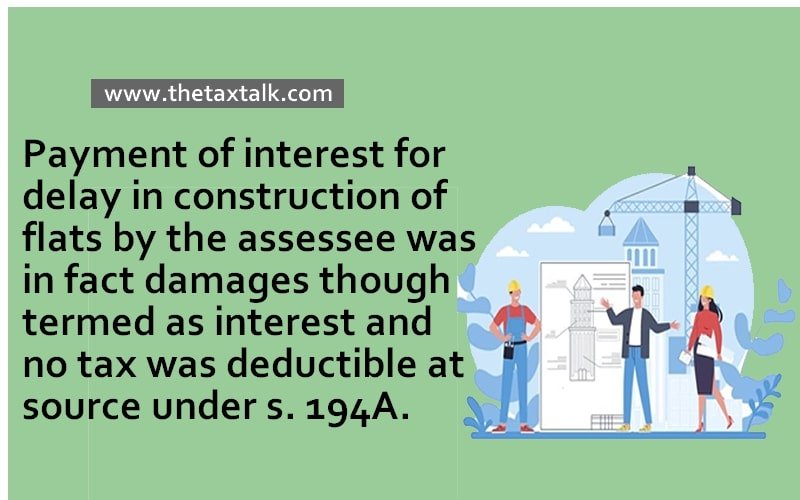 Payment of interest for delay in construction of flats by the assessee was in fact damages though termed as interest and no tax was deductible at source under s. 194A.

There are instances where the extra payment is paid by the purchaser of goods for delay in its payment. It may be referred to as either as delay payment charges, compensation, late payment charges or even interest. The question arises whether it is liable for TDS or not?

In CIT Vs. H.P.Housing Board, it has been held that when construction of a house is delayed, there can be escalation in the cost of construction. The allottee loses the right to use the house and is deprived of the rental income from such house. He is also deprived of the right of living in his own house. In these circumstances the amount which is paid by the Board is not payment of interest but is payment of damages to compensate the allottee for the delay in the construction of his house/flat and the harassment caused to him.

In such a case, the amount paid by the assessee to the allottee s is not in the nature of interest within the meaning of s. 2(28A) and in terms of s. 194A tax was not required to be deducted at source.

COMMISSIONER OF INCOME TAX vs. H.P. HOUSING BOARD

Mrs. Vandana Kuthiala, for the Appellant : M.M. Khanna with Vayur Gautam, for the Respondent

The following interesting questions arise for decision in the present case :

“1. Whether on the facts and in the circumstances of the case the Hon’ble Tribunal was right in law that the interest paid/credited by the Housing Board on the amount deposited by the allottees on account of delayed allotment of flats does not fall under the definition of interest as assigned to it in sub-s. (28A) of s. 2 of the IT Act, 1961 ?

Sec. 194A.—(1) Any person not being an individual or an HUF, who is responsible for paying to a resident any income by way of interest other than income (by way of interest on securities) shall, at the time of credit of such income to the account of the payee or at the time of payment thereof in cash or by issue of a cheque or draft or by any other mode, whichever is earlier, deduct income-tax thereon at the rates in force.”

“The definition of interest, after referring to the interest payable in any manner in respect of any moneys borrowed or debt incurred proceeds to include in the terms money borrowed or debt incurred, deposits, claims and “other similar right or obligation” and further includes any service fee or other charge in respect of the moneys borrowed or debt incurred which would include deposit, claim or other similar right or obligation, as also in respect of any credit facility which has not been utilized. This statutory definition regards amounts which may not otherwise be regarded as interest as interest for the purpose of the statute. Even amounts payable in transactions where money has not been borrowed and debt has not been incurred are brought within the scope of the definition as in the case of a service fee paid in respect of a credit facility which has not been utilized. Even in cases where there is no relationship of debtor and creditor or borrower and lender, if payment is made in any manner in respect of any moneys received as deposits or on money claims or rights or obligations incurred in relation to money, such payment is, by this statutory definition, regarded as interest.”