Madras HC directed AO to dispose of assessee’s objections against reopening of assessee by passing a speaking order. 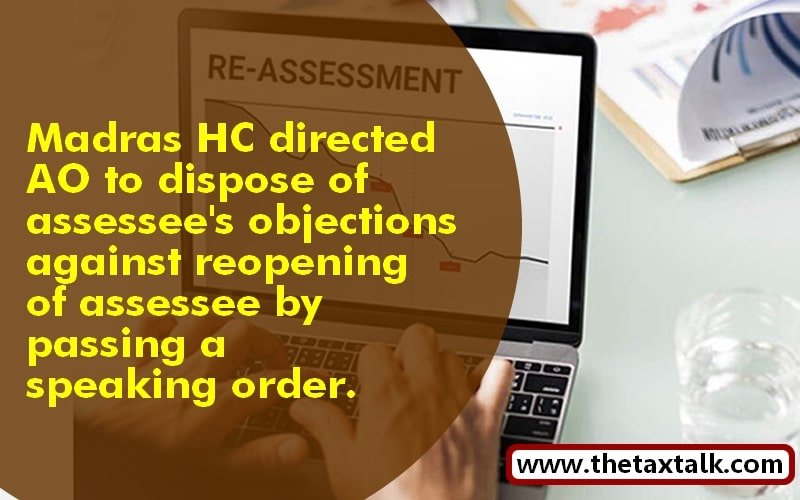 Madras HC directed AO to dispose of assessee’s objections against reopening of assessee by passing a speaking order.

P. Hemalatha v. ITO – [2021] 128 taxmann.com 223 (Madras)
Short Overview of the case:
Assessee was a doctor by profession. He had filed returns of income and said returns were also accepted by the Assessing Officer (AO).
However, later, he issued a reassessment notice based on a survey conducted in the premises of M/s Raj Children Hospital under section 133A.
The assessee filed returns of income in response to the above notice declaring the same total income as in the original returns.
Later, the assessee sent a letter to the AO seeking the reasons recorded for reopening the assessments.
AO furnished the reasons recorded by him for reopening the assessment.
The assessee submitted his objections for reopening the assessment on the ground that the reasons recorded did not point to any escapement of income but only for verification of certain transactions.
In response to the same, AO replied that notice under section 148 was only after obtaining necessary approval from the jurisdictional Joint Commissioner, and hence, the reopening is in accordance with law.
Assessee file writ-petition before the Madras High Court questioning the reassessment notices.
The Madras High Court held that the assessee had raised a specific objection that the proposal for reopening the assessment was liable to be dropped since there was no finding that there was escapement of income.
It was further contended that to carry on verification exercise, reopening couldn’t be ordered.
Though such specific contention was raised, instead of dealing with the same, the AO chose to merely inform the assessee that the proceedings were initiated only with the approval of the jurisdictional Joint Commissioner.
AO had not at all dealt with the contentions raised by the assessee.
The Hon’ble Supreme Court in the case of GKN Driveshafts India Ltd. [2002] 125 Taxman 963 (SC) had specifically held that the AO is bound to dispose of the assessee’s objections by passing a speaking order.
In as much as this requirement of law as laid down by the Supreme Court has not been complied with.
Thus, the AO was directed to dispose of the assessee’s objections by passing a speaking order.
Tags: Madras HC directed AO to dispose of assessee's objections against reopening of assessee by passing a speaking order.