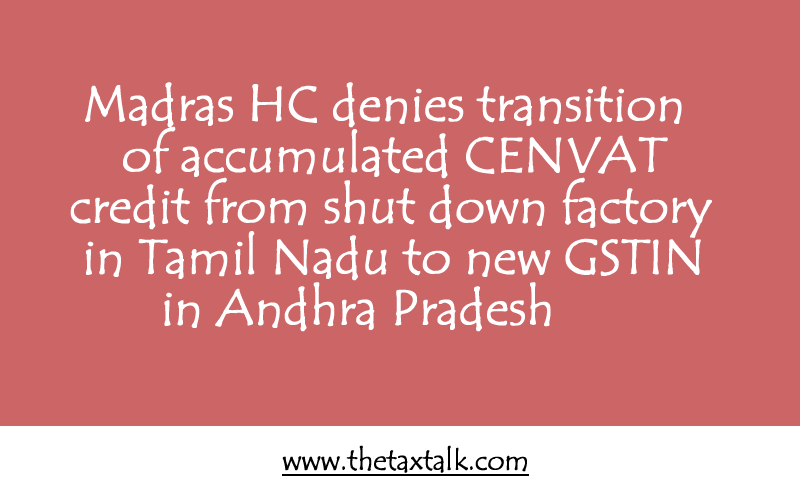 The petitioner shut down its Tamil Nadu factory and shifted to Andhra Pradesh. It had accumulated Cenvat credit.

After introduction of GST regime, it filed Trans -1 and transferred its unutilized credit of Tamil Nadu unit, under CGST Act, 2017.

It filed writ petition to allow filing of Form GST ITC-02 to transfer the unutilized input tax credit to GSTIN of Andhra Pradesh.

The Honorable High Court observed that the petitioner chose not to transfer input tax credit when it shifted its factory from Tamil Nadu to Andhra Pradesh.

It had option to utilize not only aforesaid input tax credit availed on inputs but also input services utilized in export goods and claim rebate.

Moreover, it would be possible that the petitioner while removing capital goods, work-in-progress and inputs had not discharged its liability under rule3(5) of CENVAT Credit Rules, 2004.

It would require for detailed examination by concerned jurisdictional officer.

Therefore, refund of input tax credit lying unutilized which has been transitioned by filing withTrans-1 after implementation of CGST Act, 2017 cannot be considered.

Thus, it was held that the petition for transfer of input tax Credit (CENVAT Credit) which was transitioned by the petitioner by filing Trans-1 would not be allowed.