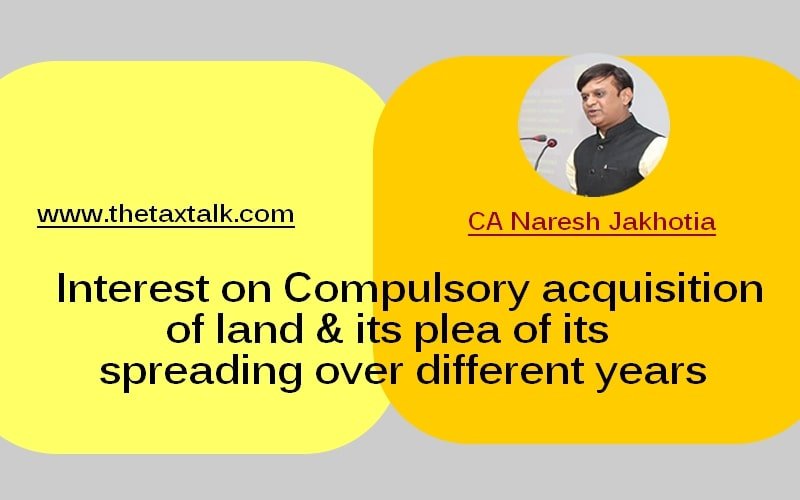 There was an interesting issue before the Madras HC with regard to the taxation of Interest on Compensation from compulsory acquisition of land. In such a case, one of the grounds of the assessee is that the interest pertains to different years and the amount is received in just one year.
Here is one case with a similar issue. Though the case is decided in favour of revenue, the observation & ratio could  be relevant in various other cases where assessee could substantiate the lower tax impact due to spread over in different years.
The short overview of the case is as under:
MADRAS HIGH COURT
D.A.K. CHINNARAJ NAIDU VERSUS THE COMMISSIONER OF INCOME TAX, MADURAI, ASSISTANT COMMISSIONER OF INCOME TAX, CIRCLE-I, VIRUDHUNAGAR.
W.P.(MD)No.21513 of 2017 And WMP(MD) No.17793 of 2017
Short Overview of the case:
Interest income on amount received on compulsory acquisition of land for constructing a house
Compensation received by the land acquisition officer
Main contention of the petitioner is that the accrued interest received by him has to be spread over from the date of acquisition and the petitioner’s request was not considered
Petitioner herein had used the amount received on compulsory acquisition of land for constructing a house and the said claim was supported by a valuation report and held that the Assessing Authority has to give necessary relief to the petitioner on that score
Primary contention urged the petitioner is that the interest portion received by the petitioner following his land acquisition should be spread over from the year of acquisition till the year of payment

HC held as under: