INCOME THAT DOESN’T TAX YOU 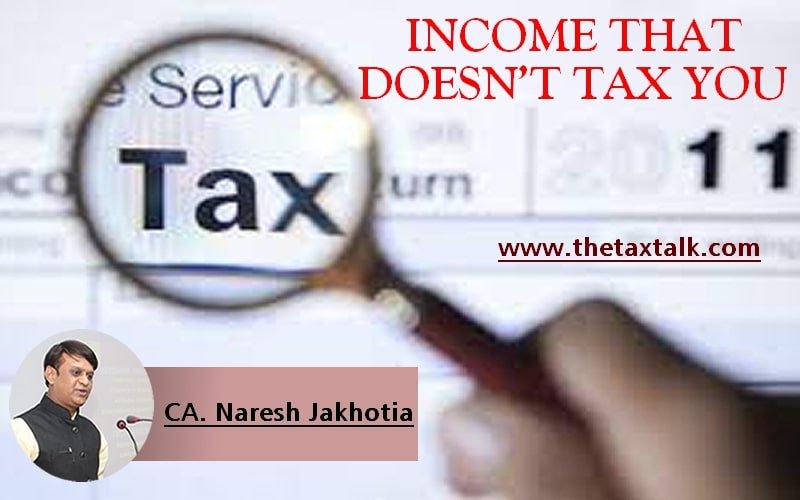 INCOME THAT DOESN’T TAX YOU

Income and Income Tax are normally coined together. Further, India follows progressive system of taxation- More earning results in higher tax liability due to difference in the slab rate and impact of surcharge over the income. However, there are certain incomes which are outside the net of Income Tax. These are referred to as Exempt income or Tax Free income. Some of the important items of income which are fully exempt from income tax & can be used by taxpayers for tax planning are as under.

(a) Any rent or revenue derived from land which is situated in India and is used for agricultural purposes;

Any income arising on sale of rural agricultural land is not liable for any income tax. Further, capital gains received on transfer of urban agricultural land by way of compulsory acquisition would be fully exempt from tax if such land was used in the past 2 years for agricultural purposes

Interest on money standing to the credit of person’s resident outside India in respect of a Non-Resident (External) Account in a bank is exempt under Section 10(4).

Any payment from a Government or recognized provident fund (PF or approved superannuation fund, or PPF is exempt from income tax u/s 10(11), (12) and (13) of the Income Tax Act-1961.

(a) There are certain types of interest incomes which are fully exempt from income tax u/s 10(15). It includes Interest on NRI bonds, Interest on Gold Deposit Bonds (not Gold Sovereign Bond), Interest on bonds of local authorities as notified, certain new Tax Free Bonds, Tax Free Infrastructure Bonds to be notified from time to time.

(b) Interest on Saving Bank Account, Post Office A/c is eligible for tax benefit up to Rs. 10,000/- p.a. There are certain banks which offer saving bank interest almost at par with FD Interest. Taxpayers may explore such options for saving tax through this route. For senior citizens, deduction admissible is Rs. 50,000/- and it is stretched so as to include the FDR interest also.

(c) Interest from Sukanya Samriddhi Yojna is exempt from tax u/s 10(11A).

Any kind of scholarship granted to meet the cost of education is exempt from tax under Section 10(16). Similarly, certain awards and rewards, etc. are completely exempt from tax under Section 10(17A). For example, Lakhotia Puraskar of Rs. 1 Lakh awarded to the best Rajasthani author every year under Notification No. 199/28/95-IT (A-I) dated 22-4-1996.

Long Term Capital Gain arising transfer of listed shares & Equity oriented Mutual Fund is not liable for taxation to the extent of Rs. 1 Lakh. [Taxpayers may note that dividend income was earlier exempt but now it has been made taxable]

Subject to stipulated terms & conditions, there are various allowances like LTC, gratuity, Allowance for Foreign Service, numerous retirement benefits, Leave salary etc which are exempt from tax in the hands of the Salaried taxpayers.

Tags: INCOME THAT DOESN’T TAX YOU