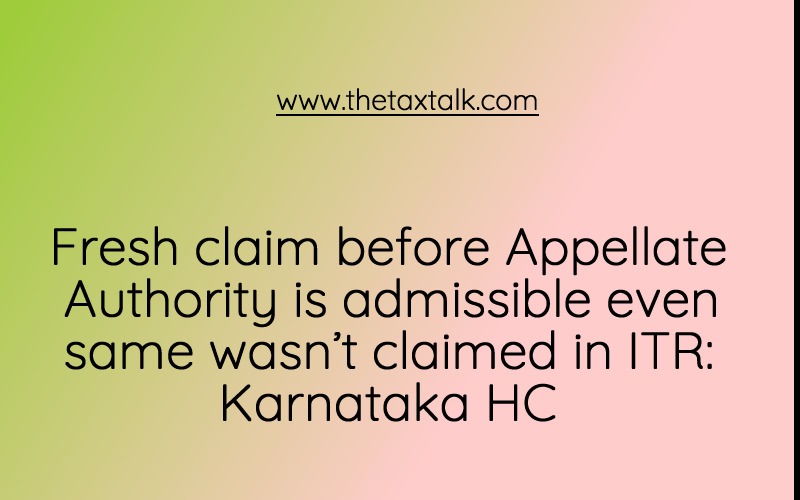 Assessee was a cooperative society.

Assessing Officer (AO), while processing its return of income, made additions under the head profit and gains from business or profession.

Assessee submitted that it filed the original return of income which contained certain typographical errors in Schedule-BP.

It had entered ‘NIL’ in item No. 1, against which it was eligible to claim an exemption under Section 10(23C)(iiib) or deduction under section 80P.

The exemption was to be filled in item No. 5 of Schedule-BP.

However, AO rejected claim of assessee.

On appeal, The CIT(A) and futher, the ITAT allowed assessee’s claim.

Before, the High Court, AO submitted that the assessee was not entitled to raise an additional claim in appeal other than by way of filing the revised return of income as provided in section 138(5).

Assessee argued that the addition was made by the CPC and not by AO during the assessment proceeding.

The process is automated, and assessee was not provided any opportunity to make a fresh claim by way of revised return before CPC.

Therefore, it claimed the same in an appeal and contended that there was a typographical error in the return of income.

Assessee submitted that without prejudice to the aforesaid submissions, it was eligible to make a claim before the appellate authority even if the same was not claimed in the original return of income or a revised return of income.

On revenue’s appeal, Karnataka High Court held that assessee’s claim for eligibility with regard to deduction under section 80P was entertained by CIT(A) as assessee did not have the opportunity to raise the contention before AO.

As the CPC passed the assessment order, assessee had no opportunity to make a fresh claim by way of revised return before the CPC as the process is automated.

Thus, assessee’s fresh claim before appellate authority is entertainable even if the same is not claimed in the original return of income, nor assessee has filed a revised return of income to make such claim.

There are various instances where the return filed by the assessee is erroneous and the claim could not be made in the original return. This judgment wo be highly relevant in all such cases.