Failure of TDS by the deductor: Deductee cannot be denied the TDS Credit 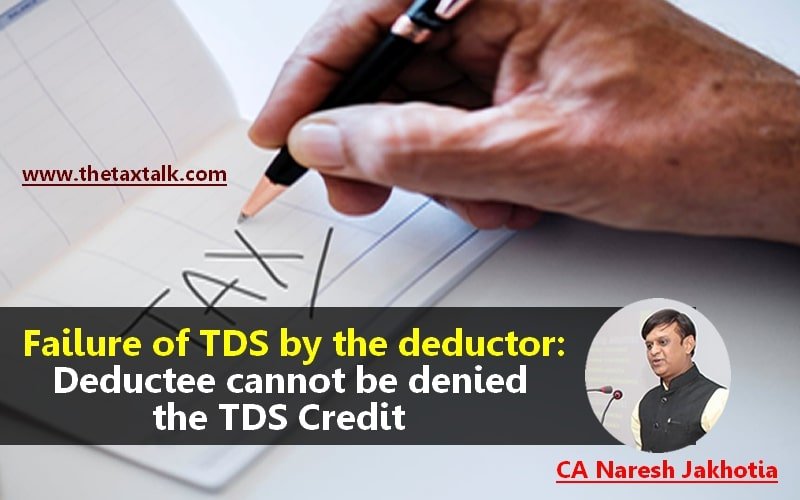 Failure of TDS by the deductor:

There is a landmark judgment by the Madras HC which has held that the TDS credit cannot be denied to the taxpayers even if the payer after doing TDS has not deposited it in the Government Treasury. The court has concluded that assessee cannot be saddled with tax liability if tax deducted on his income wasn’t deposited by the deductor. It was a writ petition filed by Ashok Kumar B. Chowatia at Madras HC vide W.P. Nos. 31167, 31170, 31172, 31174 of 2018, W.M.P. Nos. 36373, 36376 and 36379, 36380 of 2018 dated April 16, 2021 wherein petitioner Ashok Kumar B. Chowatia has  challenged the demand notices for clearance of the arrears of tax purportedly due from the Petitioner. The Petitioner contended that the tax which was demanded from the Petitioner against which tax was already deducted by the deductor.

Petitioner argued that Tax was already Deducted at Source & the deductor didn’t deposit TDS to the credit of Central Government & as a result, the Petitioner can’t be saddled with the tax liability as the deductor was an assessee in default as per the provisions of the Section 201 of the Income Tax Act, 1961. It was further argued that petitioners can’t be made to pay tax two times on the same income. It’s only the balance of tax (if any) which had escaped payment alone could be recovered from the Petitioner.

The court has decided the case in favor of the assessee. The judgment would be of enormous benefit for taxpayers who are facing demand notice due to non deposit of TDS by the deductor.

Further, the same view was also held by Gujarat HC and accessible at the article titled “Landmark Judgement – TDS credit need to be given even if TDS is not deposited by the deductor” at

For the benefit of the readers, the copy of the judgement is produced hereunder:

By this common order all the four writ petitions are being disposed. The respective petitioners have challenged the respective impugned demand notices which called upon them to clear the arrears of tax purportedly due from them.

Whereas, the respective demand notices quantify the amounts due from the petitioners as follows:-