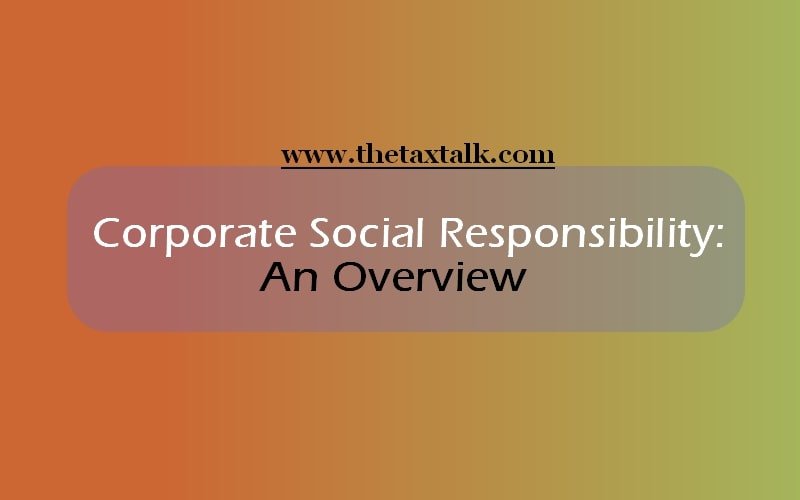 Corporate Social Responsibility (CSR) is a management concept whereby companies integrate social and environmental concerns in their business operations and interactions with their stakeholders. CSR is generally understood as being the way through which a company achieves a balance of economic, environmental and social imperatives (“Triple- Bottom-Line- Approach”), while at the same time addressing the expectations of shareholders and stakeholders. In this sense it is important to draw a distinction between CSR, which can be a strategic business management concept, and charity, sponsorships or philanthropy. Even though the latter can also make a valuable contribution to poverty reduction, will directly enhance the reputation of a company and strengthen its brand, the concept of CSR clearly goes beyond that.

Even though globally, CSR is a voluntary exercise. In India, concept of CSR has been incorporated under section 135 of the Companies Act, 2013, as mandatory requirement for certain Companies.

during the immediately preceding financial year shall constitute CSR Committee of the Board and undertake CSR activities.

Every company to which CSR criteria is applicable and the amount to be spent by a company is more than Rs. 50 lakh shall be required to constitute a CSR committee of the Board. Corporate Social Responsibility Committee of the Board shall consist of three or more directors, out of which at least one director shall be an independent director.

Board may alter such plan at any time during the financial year, as per the recommendation of its CSR Committee, based on the reasonable justification to that effect.

Amount to be spent for CSR, in every financial year, shall be at least 2 % of the average net profits of the company made during the three immediately preceding financial years. While taking up any activity for CSR expenditure following provisions should be taken care of:

The CSR amount may be spent by a company for creation or acquisition of a capital asset, which shall be held by –

In other cases, The Board shall ensure that the CSR activities are undertaken by the company itself or through –

If the company fails to spend amount required to be spent as CSR:

“On-going Project” means a multi-year project undertaken by a company in fulfillment of its CSR obligation. It shall not have timelines exceeding three years excluding the financial year in which it was commenced, and it includes such projects that were initially not approved as a multi-year project but whose duration has been extended beyond one year by the Board based on reasonable justification.

The requirement under section 135(6) of the Act is to transfer the unspent amount earmarked towards an on-going CSR project in a separate bank account.

With effect from 22nd January, 2021, a new proviso has been inserted in section 135(5) of the Act. With this insertion a new concept of carry forward and set-off of excess CSR expenditure has been introduced.

According to new provisions, if the company spends an amount in excess of the prescribed CSR expenditure, such excess amount may be carried forward to be set off from expenditure requirement of succeeding financial years subject to following conditions:

Any surplus arising out of the CSR activities shall not form part of the business profit of a company and:

Further such surplus amount, ploughed back into the same project, shall not be included:

The term “CSR Implementing Agency” has not been defined or used in CSR rules. It is used to generally refer to such agencies, which take up social, educational and other welfare work. The CSR activities can be carried out by the company either directly or through any implementing agency or through a combination of both methods. After the recent amendments in rule 4(1) of CSR Rules, any entity willing to take up CSR Projects as CSR implementing Agency shall have a CSR Registration Number.

The requirement of CSR Registration Number of is not applicable on the CSR projects or programmes approved prior to 1st April 2021.

Criteria to register an entity as CSR implementing Agency

Any entity fulfilling the above criteria may register itself with the Central Government by filing the form CSR-1 electronically with the Registrar of Companies, with effect from 1st April 2021.

Schedule VII to the Companies Act, 2013, lists areas in which CSR activities can be taken-up:

Explanation.- For the purposes of this item, the term `slum area’ shall mean any area declared as such by the Central Government or any State Government or any other competent authority under any law for the time being in force.