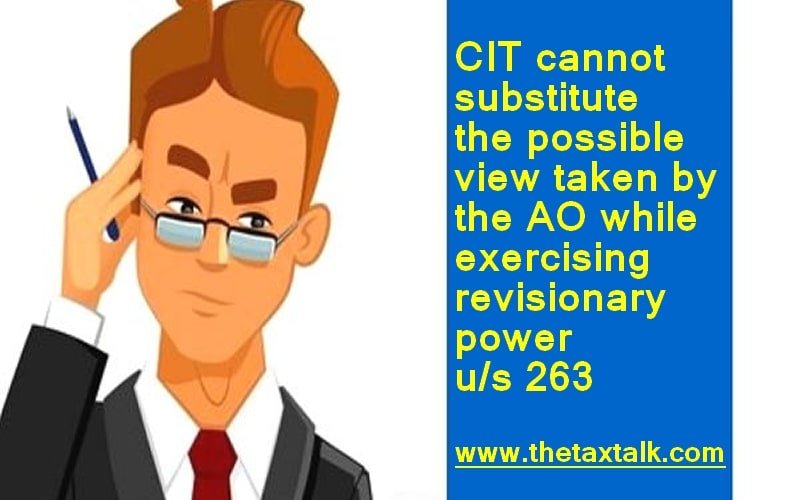 ITAT AHMEDABAD
SAKET M. JAIN (HUF) VERSUS THE PR. COMMISSIONER OF INCOME TAX-2, AHMEDABAD.
ITA No. 579/AHD/2019
Short Overview of the case:
It was a case of Revision u/s 263
Addition u/s 68 was done by the AO on the basis of  GP estimation after revisionery power was exercised u/s 68.
It was held as under :
Assessee has furnished necessary documents with respect to parties from whom it has realized the amount against the sales made to them.
In other words the burden imposed i.e. identity, genuineness of transactions and parties credit worthiness upon the assessee, for invoking the provision of section 68 were duly complied with.
Accordingly, the AO in the original assessment  has not treated the amount of sales as unexplained cash credit under section 68
AO has taken a conscious view which was one of the possible view by accepting the purchases and sales as genuine.
Thus CIT cannot substitute the possible view taken by the AO
Even for the sake of adjudication, we assume that the purchases viz a viz sales are bogus in the given facts and circumstances, then also the entire amount of sales cannot be treated as unexplained cash credit of the assessee.
It is because the assessee has not shown the gross amount of sales as agricultural income rather it has shown only the difference between the purchase and sales whereas the original party namely M/s Greenwell Orchard has shown the entire amount of sale as agriculture income without showing any expenses.
Accordingly the AO in the assessment of M/s Greenwell Orchard has allocated 20% of the sales value as expenses which was subsequently reduced by the learned CIT (A) to the tune of 5% of the sales value.
Assessment framed in the case of M/s Greenwell Orchard under section 143(3) read with section 147 of the Act has been set aside by the learned Pr. CIT under section 263 on the reasoning that the entire amount of sale proceeds is unaccounted income of the assessee.
From all these above details, it is revealed that it was the Greenwell Orchard which was engaged in generating/converting its unaccounted income into agriculture income wherein the assessee was only one of the conduit – entire amount of sales cannot be taxed in the hands of the assessee as unexplained cash credit
The amount of income generated by the assessee, in the capacity of acting as a conduit, i.e. commission on such entries provided by it which may be brought to tax.
Thus the entire amount of sales cannot be treated as income of the assessee.
Hence, the order of the l d. CIT under section 263 of the Act is not sustainable
Decided in favour of assessee.
Conclusion:
1. CIT cannot substitute the possible view take n by the AO while exercising revisionary power u/s 263

2. Amount of income generated by the assessee, in the capacity of acting as a conduit, i.e. commission on such entries provided by it may only be brought to