An overview of Section 197 of the Income Tax Act: By CA Raj Maniyar 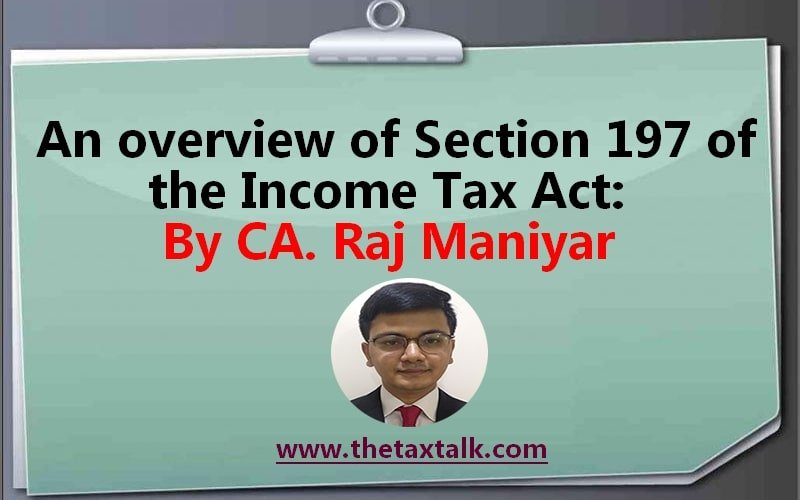 An overview of Section 197 of the Income Tax Act:

Section 197 of the Income tax Act,1961 (“the Act”) provides for lower or NIL deduction of tax certificate on certain payments received/receivable by the assessee. The procedure for obtaining a certificate under Section 197(1) of the Act is as follows:

FACTS OF THE CASE: In this case, Bently Nevada LLC (“petitioner/company”), a foreign company incorporated in USA and engagedin business of supply of goods from outside India had applied for Sec 197(1) certificate for F.Y. 2019-20 seeking NIL rate of tax or in the alternative, 1.04% for payments to be received from its Indian customers.For the A.Y. 2015-16, profit attribution rate of 2.6% to the Permanent Establishment of the petitioner was accepted by the department which meant effective tax rate for the Company was 1.04%. Further, Sec 197 certificate for F.Y. 2018-19 was issued @ 1.5%.

ISSUE:The department issued certificate under Section 197(1) of the Act @ 5%and without giving proper reasons for the same.  No procedure of estimating tax liability was done by the AO as per procedure prescribed in Rule 28AA as withholding tax rate for the FY 2018-19 was issued @ 1.5% and in any case, could not have exceeded 5% based on the facts in the company’s case which could have been noticed by the AO if procedure laid down in the Rules had been followed.Further, decision of lower or NIL rate of tax has to be taken by the AO. However, in this case, the AO acted upon the instructions of his superiorsi.e., Additional CIT and CIT(IT).

HELD: The Honourable Delhi High Court held that the withholding certificate @ 5% issued to the petitioner was unsustainable as it was not based on valid reasons and was contrary to the procedure laid out in Sec 197 of the Act read with Rule 28AA of the Rules. Hence, the impugned certificate was quashed.

Due to the slowdown in the economy because of the ongoing pandemic, Sec 197 certificate can be very useful for the assessees if conditions in relevant sections and rules are met because it would help in increased availability of funds to the assessees on the basis of lower or NIL deduction of tax on payments received/receivable which could be utilized for other business purposes.