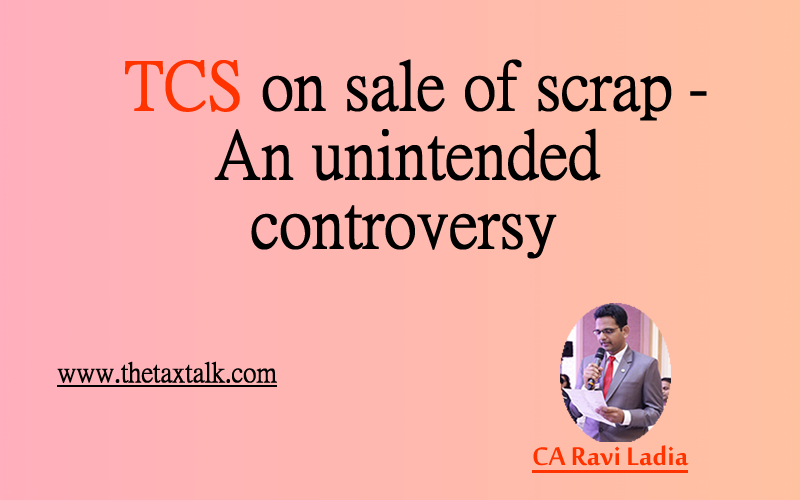 TCS on sale of scrap – An unintended controversy

TCS on sale of scrap was introduced by the Government as a measure to ensure availability of data in rather unorganized sectors of the Economy. However, over time this has ended up becoming another litigated subject which has seen it’s fair share of controversies.

An attempt has been made in this article to understand the controversy and how the same appears to have been settled by various judicial decisions.

The charge of TCS has stemmed from Sec 206C of the Income Tax Act, 1961 (herein after referred to as the “Act”). The section inter alia provides as follows:

(1A) Notwithstanding anything contained in sub-section (1), no collection of tax shall be made in the case of a buyer, who is resident in India, if such buyer furnishes to the person responsible for collecting tax, a declaration in writing in duplicate in the prescribed form and verified in the prescribed manner to the effect that the goods referred to in column (2) of the aforesaid Table are to be utilized for the purposes of manufacturing, processing or producing articles or things [or for the purposes of generation of power] and not for trading purposes.

As can be seen from above the section calls for collection of tax at source @ 1%, when a seller sells scrap or receives any payment towards sale for such scrap (whichever is earlier).

scrap means waste and scrap from the manufacture or mechanical working of materials which is definitely not usable as such because of breakage, cutting up, wear and other reasons;

On a plain reading of the above provisions, it would appear that the sale of any material which can be used as such for any purpose would not fall within the definition of scrap and hence would not attract the provision of TCS under this section, even though such products may be termed as waste or scrap in the trade parlance. The above position has also been affirmed by the Gujarat High Court in CIT vs Priya Blue Industries (P) Ltd ((2016) 237 TAXMAN 0001). This decision was supported by the Ahmedabad Tribunal in Dy CIT v Gujarat Ambuja Exports Ltd (2016 TaxPub DT 1391) wherein the Tribunal held that in case of products which have their own market value and can be used as such, then irrespective of its commercial nomenclature, TCS would not be attracted on such goods.

However, different products may be usable in different forms and thus what may be a raw material or useable form for one industry may not be so for another industry and thus this is a very subjective matter to determine whether such scrap is to be brought within the purview of TCS or not. This view is also supported by the Ahmedabad Tribunal in Dhasawala Traders v ITO (2016 TaxPub (DT) 4393)

Moreover, under sub section (1A) it has been clarified that if the buyer intends to use these products in any manufacturing process and has furnished a declaration in Form 27C then the provision of TCS collection under the aforementioned section shall not arise. As per Rule 37C, such declaration also needs to be furnished to the Chief Commissioner or Commissioner before 7th day of the succeeding month in which such declaration has been furnished. However, the Gujarat High Court in Siyaram Metal Udyog (P) Ltd has held that a minor delay in furnishing Form 27C cannot make the assessee liable to TCS. It is anyhow a well settled position of law, that procedural delays or anomalies cannot obviate the substantive law.

Another issue that needs to be debated is if a manufacturer has generated any scrap which is not directly or indirectly having any nexus with its manufacturing process, would such an entity still need to collect TCS on such scrap sold by it.

This issue first came up for consideration in Navine Fluorine International Ltd. v. ACIT 2011 (TaxPub (DT) 0927 (ITAT – Ahmedabad)). The Tribunal in this case held that the scrap items generated must have a direct nexus with the manufacturing process. In case the scrap cannot be related to the manufacturing process, it cannot fall under the definition of scrap given in the section. Hence, the collection of TCS would not arise in such a case.

An interesting issue which has popped up time and again has been the trade of scrap. It may be noted that a trader is not actually manufacturing the scrap, but purchasing it from an entity which is involved in its manufacture or from another trader who may have bought it from such manufacturer. In either case, there is no mechanical or manufacturing process carried on by the trader which will be responsible for generation of such scrap.

This issue was deliberated by the Lucknow Tribunal in the case of Lala Bharat Lal & Sons vs ITO (TDS) (2020 Tax Pub DT 1770). The Tribunal in this case held, that trading in the scrap cannot be deemed to have any nexus with manufacturing and hence a trader cannot be subjected to collection of TCS on the ground that he has dealt in scrap which has been manufactured by another assessee. The Tribunal in this judgement followed the decisions given by the Gujarat High Court in Priya Blue Industries case and by the Ahmedabad Tribunal in Dhasawala Trpaders case. Lucknow Tribunal reiterated this view in M/s Wire One vs ITO (TDS). view was also suThis ported earlier by the Ahmedabad Tribunal in Azizbhai A Lada, Bhavnagar vs ITO (TDS)

The different Courts and Tribunals in their approach have broadly laid the following principle to determine whether sale of scrap can be subjected to TCS as per the provisions of Sec 206C.

In order to attract TCS the goods being sold must satisfy the following three conditions:

Tags: TCS on sale of scrap – An unintended controversy