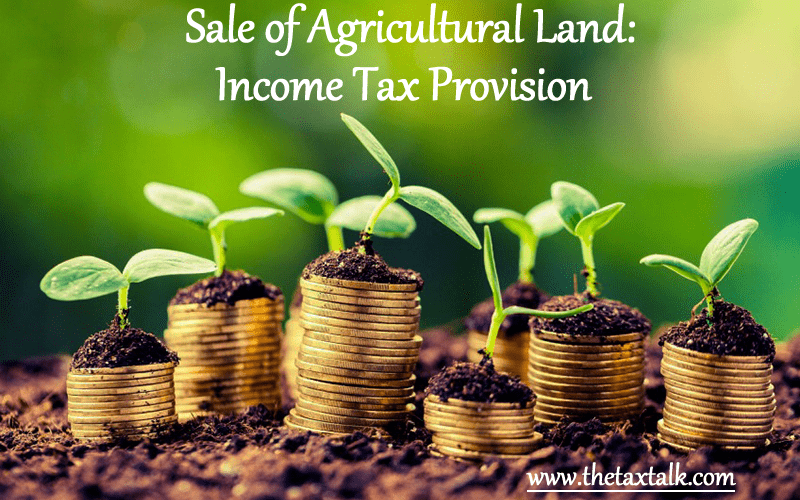 Any profit from sale of Rural agricultural land in India is tax free. It must be carefully noted that the profit on sale of Urban agricultural land Is not tax free but will be taxable. Agricultural Land in Rural Areas in India is not considered a capital asset. Therefore, any gains from its sale are not taxable under the head Capital Gains.

As per Section 2(14) of the Income Tax Act, 1961 Capital Assets does not include following agricultural land:

“agricultural land in India, not being land situate-

(b) In any area within the distance, measured aerially-

(i) Not being more than two kilometres, from the local limits of any municipality or cantonment board referred to in item (a) and which has a population of more than ten thousand but not exceeding one lakh; or

(ii) Not being more than six kilometres, from the local limits of any municipality or cantonment board referred to in item (a) and which has a population of more than one lakh but not exceeding ten lakh; or

(iii) Not being more than eight kilometres, from the local limits of any municipality or cantonment board referred to in item (a) and which has a population of more than ten lakh.

Explanation- For the purposes of this sub-clause, “population” means the population according to the last preceding census of which the relevant figures have been published before the first day of the previous year.”

In short, income arising from sale of following agricultural land in India will not be taxable.

(a) If situated in any area which is comprised within the jurisdiction of a municipality and its population is less than 10,000, or

(b) If situated outside the limits of municipality, then situated at a distance measured-

(iii) more than 8 kms, from the local limits of the municipality and which has a population of more than 10,00,000.

All land except above will be treated as urban Agricultural Land and so will be taxable like any other land.

iii.  Transfer is by way of compulsory acquisition under any law, or a transfer the consideration for which is determined or approved by the Central Government or the Reserve Bank of India.

Exemption under Section 54B of the income Tax Act, 1961, is available in respect of capital gains arising from transfer of agricultural land if the following conditions are satisfied: