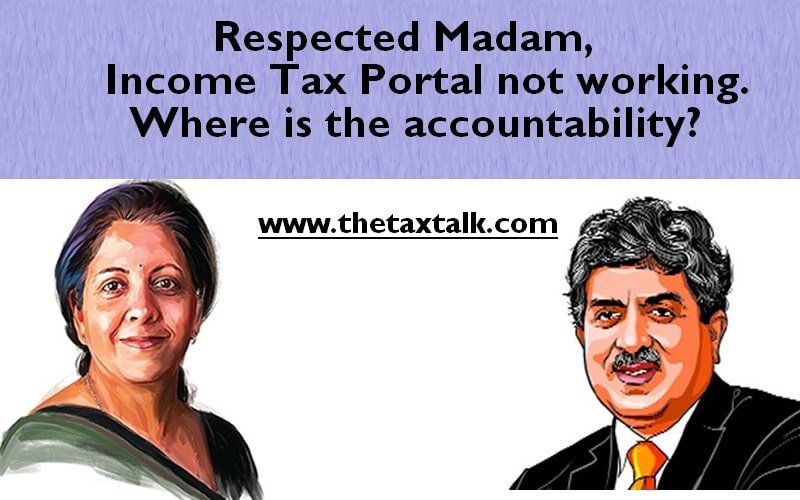 India is the hub of software industries with the best brains of the world present here. However, the much-awaited e-filing portal 2.0 has been finally launched and has also failed to meet the expectation of the taxpayers. Taxpayers were promised a new and improved version of income tax portal but they are yet to find even an access to the new site. Many are still not able to have a look at the new 2.0 version of income tax portal.

It was announced that the new portal will also process returns and issue refunds immediately. The new portal is also expected to enable payments on the site itself and free software to enable tax return preparation. Most of the fields are expected to be pre-filled with data such as salary income, interest, dividend and capital gains after tax deducted at source (TDS) details.

It has taken around 7 days full break to come out with the new income tax portal. Amidst high expectations, all were eagerly waiting for the new portal. It was expected that the Administration would meet the expectation of the taxpayers. It would have been better if the time of 15 days would have been taken before launching it as it would have ensured better delivery and result.

Earlier, only the GSTN portal was having trouble in working but the income tax portal was comparatively smooth. Now, the Income Tax Portal has also been made at par with the GSTN Site. Now, both the portal which is contributing highest revenue to the Government treasury have been making the life of the taxpayers miserable.

The result of the new income tax portal is very clear. All the trial and error in the country are carried out at the cost and consequences of the taxpayers.  There is no penalty on the other side. Even after such a long working of around 7 days, the income tax portal is full of glitches and problems. And the ball game has begun. The Finance Ministry is pointing out the figures at Infosys and the other side has assured to “Fix it soon”. Is it the problem of Infosys or the Ministry who is heading it?

The finance minister tweeted on Tuesday, tagging Infosys and its chairman Nandan Nilekani. “Hope @Infosys & @NandanNilekani will not let down our taxpayers in the quality of service being provided… Ease in compliance for the taxpayer should be our priority.”

After the above tweet by FM, Nandan Nilekani responded on Twitter that the company was addressing the glitches.

“@nsitharaman ji, we have observed some technical issues on day one, and are working to resolve them. @Infosys regrets these initial glitches and expects the system to stabilise during the week,”

It’s the tweet-tweet show that’s going on at twitter. The problem is starting from the login issue. Many users have expressed their inability in login. Many taxpayers have already complained they were unable to log in or use it without disruptions.

Though, the government has delayed income tax return (ITR) filing dates for all categories. For individual taxpayers, the deadline has been extended to September 30 from July 31. But why and for whom? Who is responsible for the mess up? The site is extremely slow and takes a long time to log in. The Goods and Service Tax Network (GSTN) portal, also set up by Infosys, had faced technical issues for a while after its launch.

What could be the solution? Why doesn’t the Government think of outsourcing the tax administration? It’s a new concept whereby the Government can frame the law and can outsource its administrative activities which can ensure back to back taxpayer friendly measures for better taxpayer services.

With the best brains of the software industries in the country, we are not able to meet the expectation of the Taxpayers. Where is the problem? Can’t we outsource most of the activities of tax administration to a few professional organisations for better delivery and taxpayers service?  Share your ideas and concepts for better governance.

Tags: Income Tax Portal not working. Where is the accountability?Respected Madam