Reassessment is invalid if satisfaction for reopening is recorded in mechanical manner. 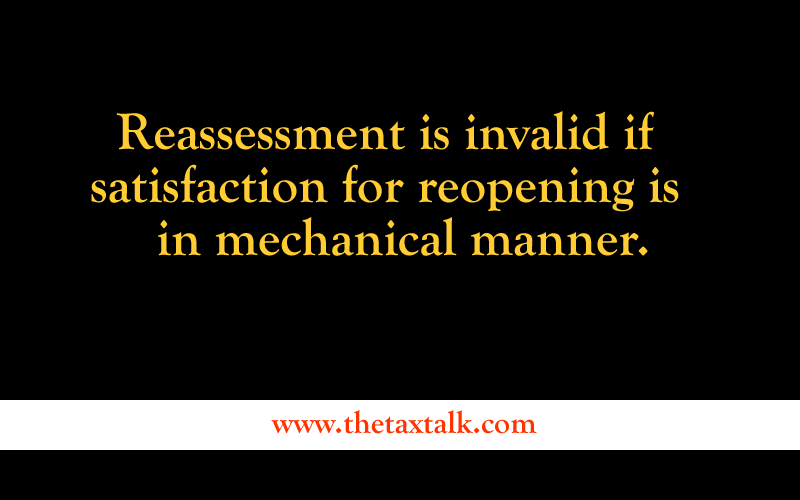 Reassessment is invalid if satisfaction for reopening is recorded in mechanical manner.

The Income Tax Appellate Tribunal (ITAT), Delhi Bench ruled that the reassessment is invalid if satisfaction for reopening is recorded in mechanical manner.

The assessee, Omkam Developers Ltd. challenged reassessment assessment proceeding on the ground of borrowed satisfaction, approval granted in mechanical manner, completion of assessment without jurisdiction, non- disposal of objections filed against reopening of assessment, non-examination of persons named in reasons recorded, change of opinion, cross-examination of witnesses not allowed, additions made against the law and the procedure specified, notice under section 133(6) of the Act issued at old addresses of subscriber companies, non-adjudication of the evidences furnished by the assessee, show cause notice not issued/served etc.

The CIT(A) rejected its contention on the validity of reassessment proceedings. The CIT(A) upheld the validity of the reasons recorded as well as upheld approval granted by the Pr. CIT for issue of the notice under section 148 of the Act.

The coram of Kuldip Singh and O.P.Kant the light of the decision of Delhi High Court in the case of NC Cable Ltd and decision of the Tribunal in the case of Madhu Apartment Pvt. Ltd wherein it was held that section 151 of the Act clearly stipulates that CIT, who is the competent authority to authorize the reassessment notice, has to apply his mind and form an opinion. The High Court further observed that the mere appending of the expression ‘approved’ says nothing.

The ITAT while quashing the reassessment order rule that it is not as if the CIT has to record elaborate reasons for agreeing with the noting put up but at the same time, satisfaction has to be recorded of the given case, which can be reflected in the briefest possible manner.

The Tribunal said that mere mentioning of “yes’ for approval, without any other evidence of application of the mind, amounts to mechanical approval by the Pr.CIT.