No tax on housewives who deposited less than Rs. 2.50 lakhs cash during demonetization: Agra ITAT 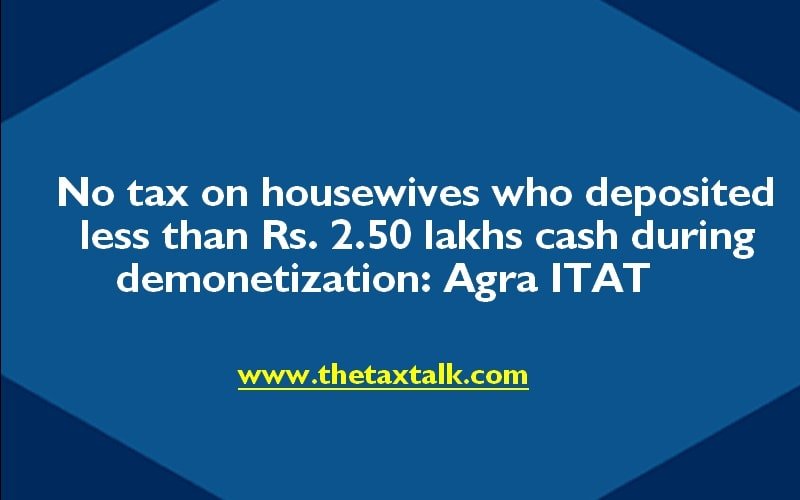 No tax on housewives who deposited less than Rs. 2.50 lakhs cash during demonetization: Agra ITAT

During the period of demonetization, the assessee, a housewife, deposited cash of Rs. 2,11,500/- in her bank account.
During the course of scrutiny assessment, she was asked to explain the source of deposit. She submitted that has no business activities and she only earns income from interest on her saving.
However, Assessing Officer (AO) had made the addition treating the amount deposited in the bank as unexplained money under section 69A read with 115BBE of the Income-tax Act, 1961.
Assessee filed appeal before the Commissioner appeal (NFAC) but failed to succeed.
Aggrieved by the order of NFAC, assessee filed the instant appeal before the Agra Tribunal.
The Agra Tribunal has ruled that as per the Instruction No. 03/2017 dated 21-02-2017, which are statutory and binding on the revenue, assessing officer has no mandate to tax the cash deposit in the bank account during the Demonetization Scheme, 2016 if it is less than 2.5 lakh.
As after demonetization women left with no option but to deposit the amount in the banks.
Therefore when assessee had given explanation to the AO that sum deposited during demonetization in bank were her money saved in last many year’s and were kept for herself and for family in case of emergency need, it could be held that assessee had duly explained the source of deposit as required by Section 69A.
Accordingly, amount deposited by the assessee during the demonetisation couldn’t be treated as income of the assessee.
It was also held by the Agra Tribunal that this ruling may be treated as precedent in respect to proceedings arising out of the cash deposit made by the housewives during the demonetisation, up to the limit of Rs 2.5 lakhs.