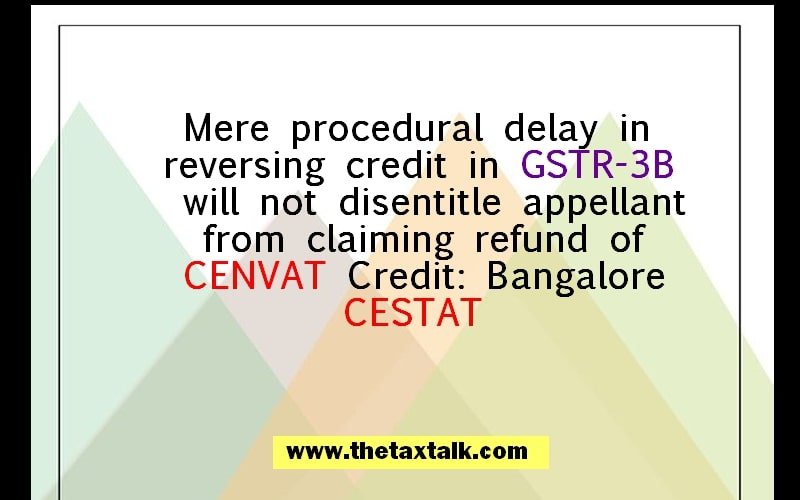 The appellant was engaged in the manufacture and export of granite slabs and tiles.
It filed refund applications for refund of cenvat credit under Rule 5 of CCR, 2004.
The original authority issued show-cause notice proposing to reject the refund claims on the ground that the appellant has not debited the amount in the cenvat register.
The appellant submitted that the balance of cenvat credit was carried forward in the TRAN-1 under GST but the amount claimed as refund has been debited in the GSTR-3B for the period December 2017.
After following due process, the original authority sanctioned the refund.
Aggrieved by the sanctioning of the refund, the Department filed appeal before the Commissioner(Appeals) who allowed appeal filed by Department against the order sanctioning the refund granted by the original authority.
The appellant filed appeal before the CESTAT.
The Honorable CESTAT observed that the eligibility of the appellant to claim refund was not disputed and it was also not disputed that the appellant had debited the amount claimed in the GSTR-3B.
The Tribunal has consistently held that credit reversed without being utilized considered as if credit has not been taken. Hence the credit reversed in GSTR-3B tantamount to not been taken credit. Since, the balance of cenvat credit was carried forward in the TRAN-1 under GST but appellant reversed the credit in the GSTR-3B.
Since, there was only a delay in debiting the same and this delay was procedural delay and would not disentitle the appellant from claiming the refund.
Tags: Mere procedural delay in reversing credit in GSTR-3B will not disentitle appellant from claiming refund of CENVAT credit: Bangalore CESTAT