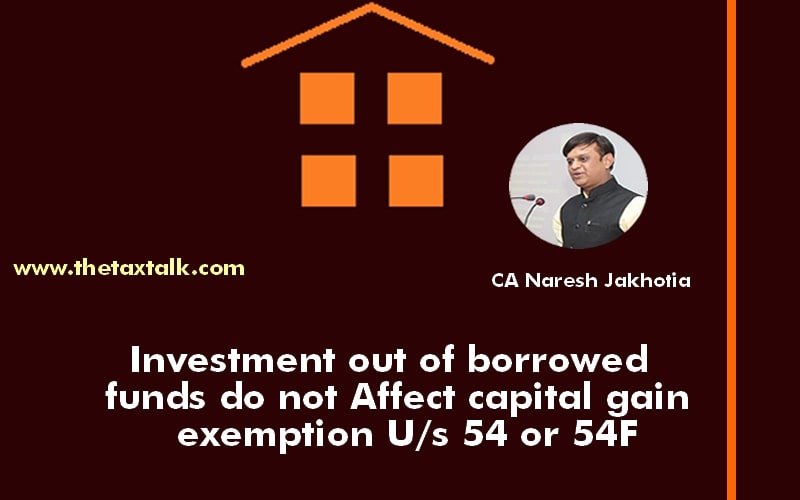 There are various provisions which offers exemption from the amount of Long Term Capital Gain (LTCG). One such provision is by way of Section 54 of the Income-tax Act, 1961 which provides for exemption in respect of long-term capital gain arising from the transfer of a residential house by an individuals and Hindu undivided families. It is subject to various stipulations, terms & conditions.

One of the common conditions arises in both this section is whether the same amount need to be invested for claiming an exemption u/s 54 & U/s 54F?

If an assessee sells the residential house or other capital asset and invests it in Gold/shares or other assets and thereafter invests subsequently in the house property within prescribed period by availing housing loan, whether he will be eligible for exemption u/s 54 or 54F?  The question emerges, whether a distinction be drawn on the basis of source of funds r not ?

Whether the exemption can be denied to the extent sale proceeds have been used for other purposes and the assessee’s fund is not utilized for purchase of house proeprty?

It may be noted here that neither the law nor any circular required the identity of the amount received on sale to be utilized for purpose of section 54F and other relevant provisions.

In ITO vs. K.C. Gopalan (2000) 162 CTR (Ker) 566, the assessee sold 93.33 cents of land along with building. There was a claim under section 54 in respect of the ‘capital gain’ on the ground that the amount realized out of the sale of the property was utilized for the construction of a house at Calicut. This claim was not accepted by the Assessing Officer on the ground that the sale price was not utilized for the construction of the building and it was deposited in private banks. The Court held that the assessee has to construct or purchase a house property for his own residence in order to get the benefit of section 54. The wording of the section itself would make if clear that the law does not insist that the sale consideration obtained by the assessee itself should be utilized for the purchase of house property.

In Mrs. Prema P. Shah vs. ITO (2006) 101 TTJ (Mumbai) 849, the assessee filed the return showing the taxable income of Rs. 33,570 on 31st December, 1993. During the previous year relevant to the assessment year 1993-94, assessee sold residential property for Rs. 60 lakhs. It was jointly owned by the assessee and Mrs. Prema P. Shah. It was purchased for Rs. 14 lakhs on 29th March, 1983 and sold on 4th April, 1992 for the aforementioned price. Assessee claimed exemption under section 54, showing long-term capital gains as nil. The Revenue authorities rejected assessee’s claim under section 54 on the ground that borrowed amount and foreign earnings were invested and not the same sale consideration. It was held that the argument of the Revenue that the same amount should have been utilized for the acquisition of new asset, cannot be accepted in view of the decision of the Tribunal, in the case of Bombay Housing Corporation vs. Asstt. CIT (2002) 76 TTJ (Mumbai) 25. In this case the Tribunal held that even if an assessee borrows required funds and satisfies the conditions relating to investment in specified assets, he is entitled to exemption. There is no requirement for claiming exemption under section 54 that the same amount of sale consideration should be utilized for purchasing the property and even borrowed funds can be utilized for that purpose.

In Asstt. CIT vs. Dr. P.S. Pasricha (2008) 20 SOT 468 (Mumbai), the Tribunal has decided that the requirement of section 54 is that the assessee should acquire a residential house within the period of one year before or two years after the date on which transfer took place. Nowhere, it has been mentioned that the same funds must be utilized for the purchase of another residential house. The requirement of the law is that the assessee should purchase a residential house within the specified period and source of funds is quite irrelevant.

There is nothing in section 54F to suggest that the same funds from the sale of original asset should go into the purchase of the new asset. If this were to be the intention of the legislature, then it would not have provided relief for a situation wherein the new asset was purchased before the sale of the old asset.

In my view It is sufficient compliance of section 54F if the new asset is purchased within one year before or two years after the sale of the original asset.

One may refer the decision of the Supreme Court in the case of CIT vs. T.N. Aravinda Reddy (1979) 12 CTR (SC) 423 : (1979) 120 ITR 46 (SC) wherein assessee sold his old house attracting capital gains & acquired full ownership of another house of which he was already a co-owner with the brothers by obtaining release deeds executed by his brothers in his favour.

The consideration for the release deed was Rs. 30,000 for each brother, which was adjusted against certain other moneys due to the assessee from his brothers. The Supreme Court held that the word “purchase” must be given its common meaning of buying for a price by payment in any form, there being no stress on the manner or source by which the new asset was acquired.

Here is the judgment in the case of Bombay Housing Corporation Vs. ACIT which may be relevant for the taxpayers. The same is produced hereunder

S.E. Dastur & P.J. Pardiwalla, for the Appellant : H. Srinivasulu, for the Respondent

These two appeals were heard together and are disposed of by a common order. Both relate to the same assessment year. One of the appeals arises out of the order of the CIT(A) dt. 30th Jan., 1996, passed, in appeal against the assessment order under s. 143(3) of the Act. The other appeal arises out of the order of the CIT(A) dt. 19th Dec., 1997, passed in appeal against the order of the AO dt. 21st Jan., 1997, under s. 143(3) r/w s. 250. What happened was that by the order dt. 30th Jan., 1996, the CIT(A) had restored the issue relating to the exemption under s. 54E to the AO for de novo consideration taking note of certain contentions raised by the assessee. The AO examined the case afresh pursuant to the directions of the CIT(A) and denied the claim for exemption again. This order was also confirmed by the CIT(A). Thus, there are two appeals.

With reference to the judgment of the Andhra Pradesh High Court, in S. Gopal Reddy vs. CIT (1990) 181 ITR 378 (AP), which has been heavily relied upon by the IT authorities, Mr. Dastur pointed out that this decision in distinguishable on facts inasmuch as it was a case of compulsory acquisition of the land and not a voluntary sale and in this judgment itself, the High Court has recognised the injustice that would be caused if investment in the specified asset within the time-limit prescribed by the section from the date of acquisition is insisted upon in a case where the additional compensation is received after protracted litigation. Accordingly, Mr. Dastur contended that while interpreting a beneficial provision, the injustice such interpretation is likely to cause should always be eschewed.