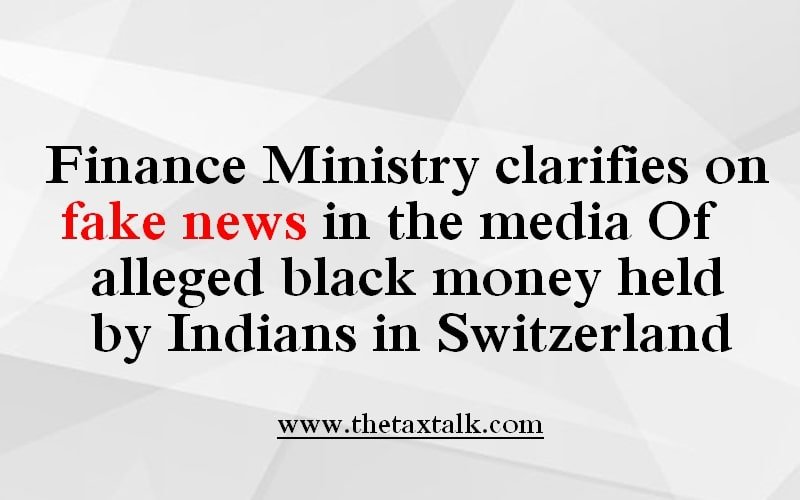 Media reports allude to the fact that the figures reported are official figures reported by banks to Swiss National Bank (SNB) and do not indicate the quantum of much debated alleged black money held by Indians in Switzerland. Further, these statistics do not include the money that Indians, NRIs or others might have in Swiss banks in the names of third–country entities.

However, the customer deposits have actually fallen from the end of 2019. The funds held through fiduciaries has also more than halved from end of 2019. The biggest increase is in “Other amounts due from customers”. These are in form of bonds, securities and various other financial instruments.

It is pertinent to point out that India and Switzerland are signatories to the Multilateral Convention on Mutual Administrative Assistance in Tax Matters (MAAC) and both countries have also signed the Multilateral Competent Authority Agreement (MCAA) pursuant to which, the Automatic Exchange of Information (AEOI) is activated between the two countries for sharing of financial account information annually for calendar year 2018 onwards.

Exchanges of Financial Account information in respect of residents of each country have taken place between both countries in 2019 as well as 2020. In view of the existing legal arrangement for exchange of information of financial accounts (which has a significant deterrent effect on tax evasion through undisclosed assets abroad), there does not appear to be any significant possibility of the increase of deposits in the Swiss banks which is out of undeclared incomes of Indian residents.

Further, the following factors could potentially explain the increase in deposits:

a. Increase in the deposits held by Indian companies in Switzerland owing to increased business transactions

b. Increase in deposits owing to the business of Swiss Bank branches located in India

d. A capital increase for a subsidiary of a Swiss Company in India and

e. Increase in the liabilities connected with the outstanding derivative financial instruments

The Swiss Authorities have been requested to provide the relevant facts along with their view on possible reasons for increase/decrease in the light of the media reports highlighted above.

Tags: Finance Ministry clarifies on fake news in the media Of alleged black money held by Indians in Switzerland