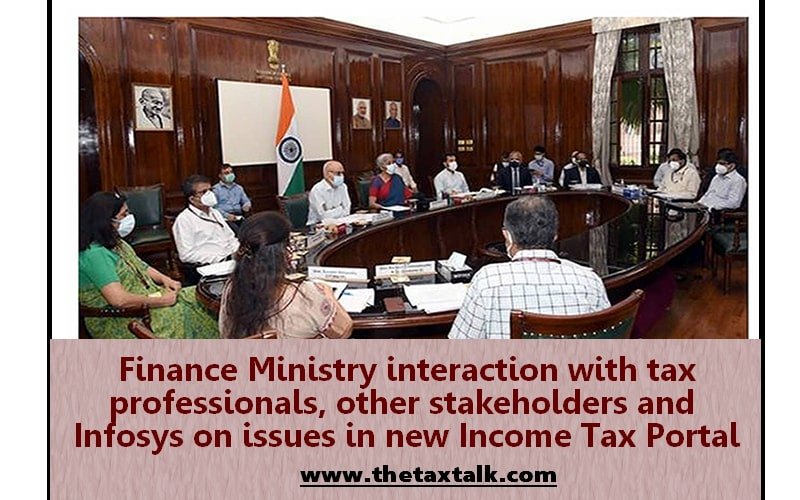 professionals, other stakeholders and Infosys on issues in new Income Tax Portal

A meeting was held between senior oﬃcials of the Finance Ministry and Infosys on 22.06.2021 on issues in the new Income Tax Portal. The meeting was presided over by Union Minister for Finance & Corporate Affairs Minister Smt.   Nirmala   Sitharaman. Union Minister of State for Finance & Corporate Affairs, Shri Anurag Singh Thakur, also participated in the meeting. The interaction was attended by Shri Tarun Bajaj, Secretary Revenue; Shri J. B. Mohapatra, Chairman, CBDT; Smt. Anu J. Singh, Member (L & Systems), CBDT, and other senior oﬃcers of CBDT. Infosys was represented by its MD & CEO, Shri Salil Parekh and COO, Shri Praveen Rao and other members of their team. The meeting was also attended by 10 tax professionals from across the country, including representatives of ICAI and All India Federation of Tax Practitioners (AIFTP). 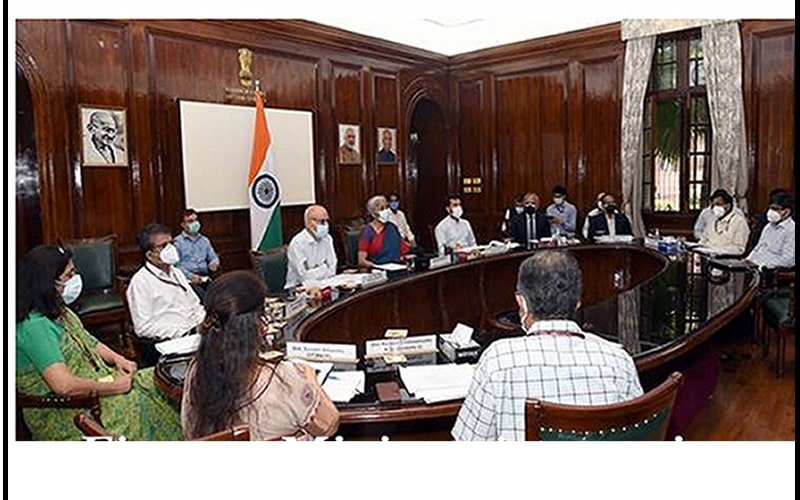 The new e-ﬁling portal 2.0 of Income Tax Department (incometax.gov.in) went live on 07.06.2021. Since its launch, there were numerous glitches in the functioning of the new portal. Taking note of the grievances voiced on social media by taxpayers, tax professionals and other stakeholders, the Finance Minister had also ﬂagged the issues to the vendor M/s Infosys, calling upon them to address these concerns. However, since the

portal continued to be plagued by technical glitches causing inconvenience to taxpayers, it was decided to hold a meeting between Finance Ministry and Infosys as also other stakeholders here today. Suggestions in respect of the glitches on the portal were invited online by 18.06.2021. More than 700 emails detailing over 2,000 issues including 90 unique issues/problems in the portal were received in response to the same.

During the meeting, Smt. Sitharaman emphasised that enhanced taxpayer service is an important priority for the present Government and every effort should be  made  to amplify the same. While appreciating the role of ICAI and its president Shri Jambusaria and the ICAI’s positive contribution in giving shape to today’s meeting, the Finance Minister complimented them for providing speciﬁc nuanced inputs lying between the intersection of technology and taxation. Smt. Sitharaman also expressed her gratitude to the people who sent inputs through email and assured them  that  their  suggestions would be taken up in all earnestness and would be addressed on priority.

The Finance Minister exhorted Infosys (service provider) to work on the tax portal to make it more humane and user-friendly and expressed her deep concern on the various problems being faced by the stakeholders in the new portal which was expected to provide a seamless experience to taxpayers. 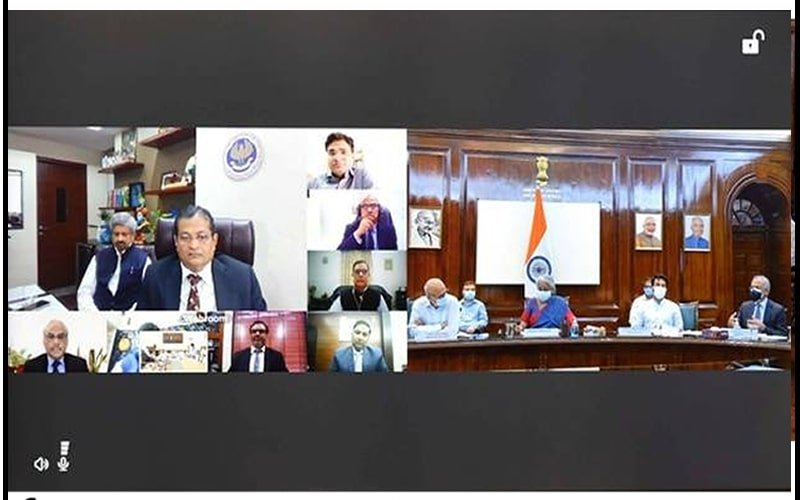 Smt. Sitharaman asked Infosys to address all issues without further loss of  time, improve their services, redress grievances on priority as it was impacting taxpayers adversely. The Finance Minister concluded her remarks by appreciating the taxpayers who have kept up with the timelines of compliances despite the COVID-19 pandemic. Smt. Sitharaman also hoped that the positive engagement between taxpayers, tax professionals and the Government would continue in future. The Finance  Minister assured them that the Government is responsive to their problems and is proactively committed to enhance taxpayer service and experience.

The team from Infosys, which was led by the CEO and COO of Infosys, took note of the issues highlighted by the stakeholders. They also noted the observations and suggestions received from various users and stakeholders through email. The Infosys team acknowledged the technical issues in the functioning of the portal and shared the status of the resolution w.r.t the issues highlighted by the stakeholders. They informed that Infosys has been working to ﬁx the technical issues noticed in the functioning of the portal and that they have augmented the resources for execution of the project on the hardware as well as the application side and that some of the issues have already been identiﬁed and ﬁxed. For the other remaining technical issues, they assured that their teams were working on these issues and gave the expected timelines within which the issues such as e-proceedings, Form 15CA/15CB, TDS statements, DSC, viewing of past ITRs etc. are expected to be resolved in about a week. It was also decided that the timelines mentioned by Infosys to redress the issues would also be placed in public domain in due course.

This interaction was followed by another detailed meeting between senior oﬃcers of the Department of Revenue and the Infosys team, covering technical issues in the new portal.