Expenses made out of income of estate of deceased: Whether diversion of income by overriding title? 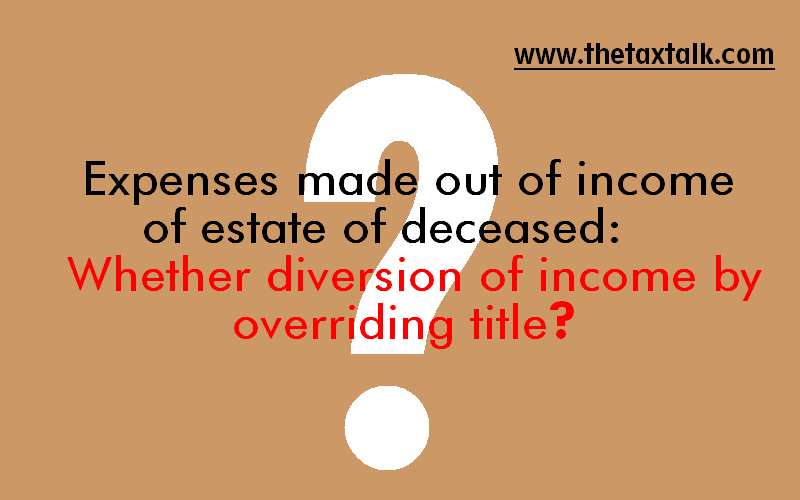 Expenses made out of income of estate of deceased:

Whether diversion of income by overriding title?

Supreme court in the case of P.C. Mullick (Executors) vs CIT has held that expenses made on ‘Sradh’ of the testator and in taking out a probate of will out of the income of the estate as directions of the testator contained in the will is not diversion by overriding title.

The executors of a testator (one Akshoy Kumar Ghose, deceased) appeal from a judgment of the High Court of Judicature at Fort William in Bengal delivered on a reference by the CIT under s. 66, Sub ss. 1 and 2 of the Indian IT Act. The testator died in October, 1931. By his will he appointed the appellants (and another) his executors. He directed them to pay his debts out of the income of his property, and to pay Rs. 10,000 out of the income of his property on the occasion of his “Addya Shradh” for expenses in connection therewith to the person entitled to perform the Shradh. He also directed his executors to pay out of the income of his property the costs of taking out probate of his will. After conferring out of income benefits on the second wife and his daughter and (out of the estate) benefits on the sons, if any, of his daughter, and after providing for the payment out of income “gradually” of divers sums to some persons, and certain annuities to others, he bequeathed all his remaining property, (in the events which happened) to a son taken in adoption after his death by his wife, viz., one Ajit Kumar Ghosh who is still a minor. The title of the son is defeasible in the event of his dying childless during the lifetime of the testator’s wife, and until he attains the age of 25 years the property has to remain in the possession of the executors who are to defray the expenses of education, maintenance and other necessary expenses out of the income of the estate.

3. He arrived at this figure by the following procedure :- He ascertained the total taxable income received during the relevant year as amounting to Rs. 1,89,901, and the agricultural income (within the meaning of s. 4(3)(viii) of the Act) so received at Rs. 90,015. He next ascertained the obligations which fell to be discharged by the executors during the year out of the income of the testator’s estate. These obligations (which he termed “charges” ) were of different kinds. Some arose under the will of the testator’s father ; others consisted of the annuities payable under the testator’s will and of the payments actually made during the year in respect of the sums thereby directed to be paid “gradually”.

4. These “charges” he treated (being, as he thought, bound to do so by the decision in Raja Bejoy Singh Dudhuria vs. CIT 1933 ITR 135 as of such a nature that the moneys required to meet them could not be regarded as income of the appellants. But since the “charges” were payable out of the whole income whether taxable or not, he apportioned the “charges” between the taxable income and the agricultural income, allocating the sum of Rs. 35,520 to the taxable income with the result that of the said sum of Rs. 1,89,901 he treated only the sum of Rs. 1,54,381 as income of the appellants. This amount he further reduced by making deductions in respect of the Rs. 5,537 expended during the year in respect of the testator’s “Addya Shradh”. Certain other adjustments had to be made (chiefly concerned with outgoings in respect of the house property) which further reduced the sum of Rs. 1,54,381 to a sum of Rs. 1,22,396. This he fixed as the “total income” of the executors. He then deducted from that total income so much thereof as was represented by interest on securities and dividends taxed at the source and assessed the executors as liable to pay tax on the balance. He refused to treat the expenses of probate as one of the “charges,” the amount of which could not be regarded as income of the executors, and accordingly made no allowance or deduction in respect thereof.

5. On appeal to the Asstt. CIT the total income liable to tax was reduced to a sum of Rs. 59,344. The reasons for this reduction are immaterial, because upon all the points involved in the present appeal the Asstt. CIT agreed with the course adopted by the ITO.

6. The executors then applied to the respondent to refer five questions of law to the High Court under s. 66(2) of the Act. The respondent, for reasons which need not be specified, only referred three of the questions, but added an additional one on his own motion under s. 66(1).

7. The questions so referred were as follows :

Question 1.—Whether or not in computing the chargeable ‘income’ the whole of the amount (Rs. 10,000) provided in the will of Akshoy Kumar Ghosh as payable ‘out of income’ on account of his ‘sradh’ should have been left out of calculation and not merely the actual amount paid in the year of assessment on account of the same (Rs. 5,537) ?

Supplementary Question.-Whether in computing the income chargeable to tax in this case, the ITO should, on a proper application of the law, have excluded no part of the sum of Rs. 10,000 ?

Question 2.—Whether or not the cost of obtaining probate of the Will of Akshoy Kumar Ghosh should have been excluded from the chargeable ‘income’ of the assessees, particularly in view of the express provisions in the will that the same shall be payable out of the income?

Question 3.—Whether or not the assessees were entitled to credit for the full amount of deductions of tax at source on account of securities and dividends, without any abatement in respect of the proportionate amount or charges allocated to and allowed against the total receipt from such sources ?

9. The executors have appealed to his Majesty in Council, and in the course of the argument a point arose which must be dealt with in limine. It was suggested that the assessment should be treated as being not an assessment upon the executors in regard to the income of the executors, but an assessment upon the appellants as trustees (under s. 40 of the Act) for the residuary beneficiary Ajit Kumar Ghosh. In their Lordships ‘ opinion this contention is not open to the appellants. The matter has all along proceeded and been argued by both sides upon the footing that the assessment was an assessment of executors ‘ income. There is no evidence that at the relevant date the estate had been cleared and was held by the appellants simply as trustees, indeed the indications are all the other way. It is true that the assessment order refers to the infant son as the sole beneficiary. It is also true that in some respects the procedure adopted by the ITO is logically more applicable to the ascertainment of residuary income than to the calculation of the total income of an estate, a fact which in all probability is the result of a desire on the part of the authorities to act with fairness to all concerned. But however that may be, the assessment in its present form stands, subject only to the question which their Lordships have to decide, viz., whether the High Court has correctly answered the questions submitted to it.

10. Their Lordships agree with the answers given to question 1, the supplementary question and question 2. The payment of the Shradh expenses and the costs of probate were payments made out of the income of the estate coming to the hands of the appellants as executors, and in pursuance of an obligation imposed by their testator. It is not a case like the case of Raja Bejoy Singh Dhudhuria vs. CIT, Calcutta, (Supra) in which a portion of income was by an overriding title diverted from the person who would otherwise have received it. It is simply a case in which the executors having received the whole income of the estate apply a portion in a particular way pursuant to the directions of their testator, in whose shoes they stand.

11. As regards question 3 their Lordships think that it might well have been answered in the negative. It appears to have been based upon a misunderstanding by the appellants of the situation. Had they been in fact charged with any tax deducted at source they would have been entitled to credit for that amount ; but in fact the whole of the sums in respect of interest on securities and dividends which were brought in as gross for the purpose of ascertaining the total income of the executors, was deducted for the purpose of fixing the income on which tax was to be charged. They have not been charged with any tax deducted at source.

12. Their Lordships are of opinion that this appeal fails and should be dismissed. They will humbly advise his Majesty accordingly. The appellants must pay the costs of the appeal.

Tags: deduction towards Liability of deceasedP.C. Mullick (Executors) vs CIT