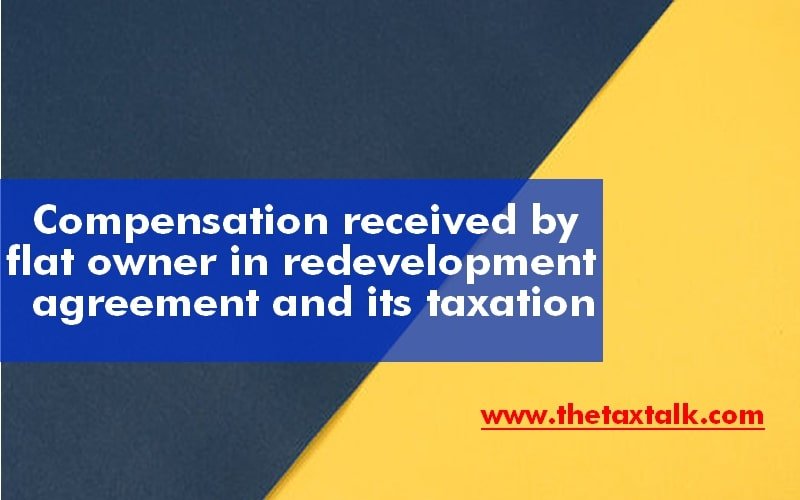 Here is an important judgement on the taxability of compensation from developer in the hands of the owner of flat against redevelopment agreement.

The complete order is as under:

Instant appeal by the assessee is directed against the order dated 3rd March 2014, passed by the learned Commissioner (Appeals)– 39, Mumbai, for the assessment year 2009–10.

“1. On the facts and in the circumstances of the case and in law, the learned Commissioner (Appeals) erred in upholding the action of the Assessing Officer in taxing the compensation received from the Developer amounting to ` 26,23,238 as ”Income From Other Sources.

“2. On the facts and in the circumstances of the case and in law, the learned Commissioner (Appeals) erred in not appreciating the fact that the aforesaid compensation received represents a capital receipt not exigible to tax.

“…by virtue of Regulation 14, the FSI of a receiving plot is automatically allowed to be exceeded by 0.8 as mentioned in the said Regulation. For example, a plot in the suburb of Mumbai had an existing FSI of 1 prior to the year 1991 which had already been exhausted by construction of various flats. However, by virtue of Regulation 14, the society in respect of that building automatically got extension of FSI by 0.8. That means, if the plot of land was 1,000 sq. mtrs. then additional floors could be constructed to the extent of built up area of 800 sq. mtrs. As per the new scheme, either the society could construct additional floors having total area of 800 sq. mtrs. by purchasing TDR from the market or could transfer such right to any other builder or developer who had the TDR or who could arrange the TDR from the market. However, it is made clear that the construction could not be made without loading the TDR on the receiving plot. The above discussion shows that two separate and distinct rights arose as per DCR, 1991 i.e., TDR and the right to construct additional floor. The former has inbuilt cost while the later one arose without any cost. Regulation 14 makes it clear that FSI of receiving plot shall be allowed to be excluded in the prescribed manner. Such right was made available automatically without paying anything either to BMC or to the Government.

“4. In our considered view, it is only elementary that the connotation of income howsoever wide and exhaustive, take into account only such capital receipts are specifically taxable under the provisions of the Income tax Act. Section 2(24)(vi) provides that income includes “any capital gains chargeable under section 45”, and, thus, it is clear that a capital receipt simplicitor cannot be taken as income. Hon‟ble Supreme Court in the case of Padmraje R. Kardambande vs CIT (195 ITR 877) has observed that “..,, we hold that the amounts received by the assessee during the financial years in question have to be regarded as capital receipts, and, therefore, (emphasis supplied by us), are not income within meaning of section 2(24) of the Income tax Act….” This clearly implies, as is the settled legal position in our understanding, that a capital receipt in principle is outside the scope of income chargeable to tax and a receipt cannot be taxed as income unless it is in the nature of revenue receipt or is brought within the ambit of income by way of a specific provision in the Act. No matter how wide be the scope of income u/s.2(24) it cannot obliterate the distinction between capital receipt and revenue receipt. It is not even the case of the Assessing Officer that the compensation received by the assessee is in the revenue field, and rightly so because the residential flat owned by the assessee in society building is certainly a capital asset in the hands of the assessee and compensation is referable to the same. As held by Hon‟ble Supreme Court, in the case of Dr. George Thomas K vs CIT(156 ITR 412), “the burden is on the revenue to establish that the receipt is of revenue nature” though “once the receipt is found to be of revenue character, whether it comes under exemption or not, it is for the assessee to establish”. The only defence put up by learned Departmental Representative is that cash compensation received by the assessee is nothing but his share in profits earned by the developer which are essentially revenue items in nature. This argument however proceeds on the fallacy that the nature of payment in the hands of payer also ends up determining it‟s nature in the hands of the recipient. As observed by Hon‟ble Supreme Court in the case of CIT vs. Kamal Behari Lal Singha (82 ITR 460), “it is now well settled that, in order to find out whether it is a capital receipt or revenue receipt, one has to see what it is in the hands of the receiver and not what it is in the hands of the payer”. The consideration for which the amount has been paid by the developer are, therefore, not really relevant in determining the nature of receipt in the hands of the assessee. In view of these discussion, in our considered view, the receipt of Rs.11,75,000 by the assessee cannot be said to be of revenue nature, and, accordingly, the same is outside the ambit of income under section 2(24) of the Act. However, in our considered opinion and as learned counsel for the assessee fairly agrees, the impugned receipt ends up reducing the cost of acquisition of the asset, i.e. flat, and, therefore, the same will be taken into account as such, as and when occasion arises for computing capital gains in respect of the said asset. Subject to these observations, grievance of the assessee is upheld.”

Tags: amount received on Redevelopment agreementtaxation in case of redevelopment