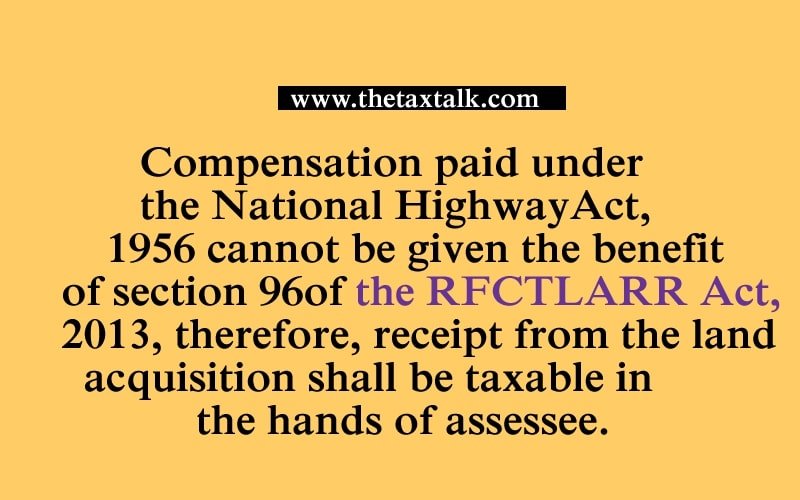 Land of assessee was compulsorily acquired by Government under the National Highway Act, 1956 and assessee claimed exemption from long term capital gains arising from compensation received under Right to Fair Compensation and Transparency in Land Acquisition, Rehabilitation and Resettlement Act, 2013 (RFCTLARR Act). Since the land acquisition was done under the specific provisions of the National Highway Act (NHA) 1956 and no notification was issued by Government to extend the benefit of the RFCTLARR Act, 2013 to the land acquired under The National Highway Act, 1956, assessee cannot be given the benefit of section 96 of the RFCTLARR Act, 2013, therefore, receipt from the land acquisition shall be taxable in the hands of assessee.

The copy of the judgment is as under:

Rajendra Sharma, Adv. for the Appellant. Mazhar Akram, Sr. DR. for the Respondent.

Laliet Kumar, Judicial Member – These are to appeal is filed by the assessee, feeling aggrieved by the order passed by the CIT(A) on the following grounds.

6.1 The facts of the case are that the appellant land was compulsorily acquired by the government under the National Highway Act, 1956 and in his return of income he had disclosed no LTCG earned thereon. During the assessment proceedings, the appellant stated that the said LTCG was exempt from taxation in view of the CBDT Circular no 36/2016 dated 25-10-2016 The AO findings on the issue are reproduced below.

The provisions of section 10(37) of the Income-tax Act, 1961 are the only provisions in the Act which can be considered for the purpose of analyzing the appellants’ claim of exemption of capital gain arising from compulsory acquisition of his land. However, a mere perusal of the provisions of that section reveals that under that section such exemption is available only in respect of agricultural land and that too on fulfillment of certain conditions. It is reproduced below.

In the case of an assessee being an individual or a Hindu undivided family, any income chargeable under the head Capital gain arising from the transfer of agricultural land where such land is suitable in any area referred to in item (a) or item(b) of sub-clause (iii) of clause (14) of section 2.Such land, during the period of two years immediately preceding the date of transfer, was being used for agricultural purposes by such Hindu undivided family or individual or a parent of his. Such transfer is by way of compulsory acquisition under any law, or a transfer the consideration for which is determined or approved by the Central Government or the Reserve Bank of India. Such income has arisen from the compensation or consideration for such transfer received by such assessee on or after the 1st day of April, 004.

I find that the appellant’s land acquired by the government is not an agricultural land. This fact is borne out of title documents submitted by appellant during the course of the assessment proceedings and is also confirmed from paragraph no 5 of his written submission to the AO that is dated 30-11-2017 and is reproduced below.

“Para 5 As required by your good self to furnish the copy of last year’s original and revised income tax returns in this connection same are furnished herewith as the reason for the revision of return is concerned. In this connection it is submitted that during the year under consideration two properties of the assessee have been acquired by Government of India under compulsory acquisition on which TDS was deducted and tax was also paid by the assessee under the head long term capital gain would be charged on the non agricultural lands compulsory acquired by the government but by then assessee had already deposited the taxes and filed the return so in order to rectify this mistake returned was revised by the assessee.

Further, since the appellant’s land is acquired not under the RFCTLARR Act but under the National Highway Act, 1956 the appellant’s argument that its case falls within the ambit of CBDT Circular No 36/2016 dated 25-10-2016 too has no basis.

Subject: Taxability of the compensation received by the land owners for the land acquired under the Right to Fair Compensation and Transparency in Land Acquisition, Rehabilitation and Resettlement Act, 2013 (‘RFCTLARR ACT’)-reg.

Under the existing provisions of the Income-tax Act 1961) an agriculture land which is not situated in specified urban area is not regarded as capital asset. Hence, capital gains arising from the transfer (including compulsory acquisition) of such agricultural land is not taxable. Finance [No. 2] Act, 2004 inserted section 10(37) in the Act from 1-4-2005 to provide specific exemption, to the capital gain arising to an individual or a HUF from compulsory acquisition of an agricultural land situated in, specified urban limit, subject to fulfillment of certain conditions. Therefore, compensations received from compulsory acquisitions of an agricultural land is not taxable under the act (subject to fulfillment of certain conditions for specified urban land.

4 The above may be brought to the notice of all concerned.”

Provisions of this Act not to apply in certain cases or to apply with certain modifications.—

LIST OF ENACTMENTS REGULATING LAND ACQUISITION AND REHABILITATION AND RESETTLEMENT

In the result both the appeal of the assessee has dismissed.