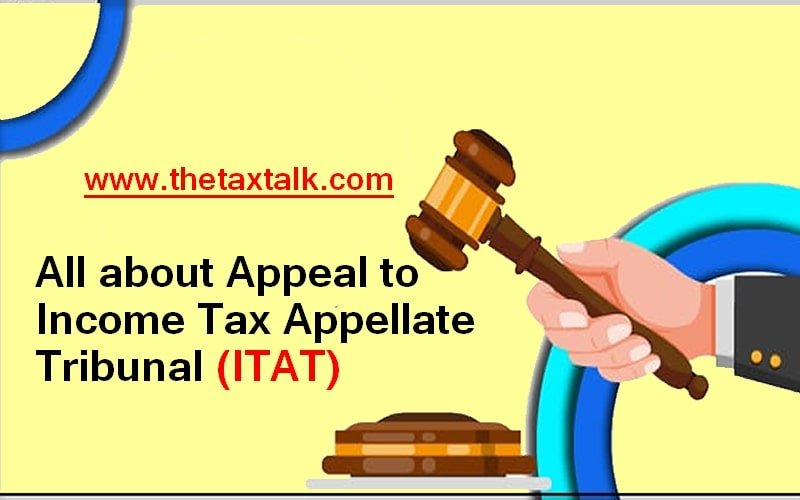 There are various knowledge sharing materials which are provided by the Income Tax Department for the update of the member. It acts as a guide to the taxpayers, tax professional & tax authorities in making the due compliances. One such knowledge sharing content is with regard to the filing of appeal before the Income Tax Appellate Tribunal (ITAT).

The Commissioner of Income-Tax (Appeals) is the first appellate authority and the Income Tax Appellate Tribunal (ITAT) is the second appellate authority. Appeal to the ITAT can be filed by any of the aggrieved party either by the taxpayer or by the Assessing Officer.

The ITAT is constituted by the Central Government and functions under the Ministry of Law. ITAT consists of two classes of members – Judicial and Accountant. In this part you can gain knowledge about various provisions relating to appeals to the ITAT.

Appealable orders in case of appeal by the taxpayer

A taxpayer can file an appeal to the ITAT in respect of following orders:

Appealable orders in case of appeal by the Commissioner

The departmental appeal shall beallowed only in cases where the tax effect involved in the appeal exceeds Rs. 10,00,000. In other words, the Commissioner of Income-Tax can direct the Assessing Officer to file an appeal to the ITAT against the order of the Commissioner of Income-Tax (Appeals) only in those cases in which the tax effect exceeds Rs. 10,00,000 [refer Circular No. 21/2015, Dated 10-12-2015].

Appeal not to be filed by the department in certain cases

“Tax effect” means the difference between the tax on the total income assessed and the tax that would have been chargeable had such total income been reduced by the amount of income in respect of the issues against which appeal is intended to be filed (hereinafter referred to as “disputed Issues”). However, the tax will not include any interest thereon, except where chargeability of interest itself is in dispute. In case the chargeability of interest is the issue under dispute, the amount of interest shall be the tax effect. In cases where returned loss is reduced or assessed as income, the tax effect would include notional tax on disputed additions. In case of penalty orders, the tax effect will mean quantum of penalty deleted or reduced in the order to be appealed against.

In case where a composite order/judgment involves more than one taxpayer, each taxpayer shall be dealt with separately.

Adverse judgments relating to the following issues should be contested on merits notwithstanding that the tax effect entailed is less than the monetary limits specified above or there is no tax effect.

a) Where the Constitutional validity of the provisions of an Act or Rule is under challenge, or

b) Where Board’s order, Notification, Instruction or Circular has been held to be illegal or ultravires, or

c) Where Revenue Audit’s objection in the case has been accepted by the Department.

e) Matters pertaining to other direct taxes, i.e., other than Income-Tax

f) Where the tax effect is not quantifiable or not involved, such as case of registration of trust or institution under section 12A.

g) Where the addition relates to undisclosed foreign assets/bank accounts.

The ITAT may admit an appeal even after the period of 60 days if it is satisfied that there was sufficient cause for not presenting the appeal within the prescribed time.

Documents to be submitted with appeal

In case of appeals to the ITAT on or after 1-10-1998 (irrespective of the date of initiation of assessment proceedings), the following fees are payable:

Fees for filing the appeal

Fees for filing the appeal in other cases

The appellant or the respondent, i.e., the opposite may submit a paper book. A paper book is to be submitted in duplicate and should contain documents or statements or other papers referred to in the assessment order or the appellate order on which appellant/respondent wants to rely.

The delay in filing the paper book may be condoned in genuine cases of delay.

The ITAT can also on its own direct the preparation of paper book in triplicate by and at the cost of appellant or the respondent as it may consider necessary for disposal of appeal.

Additional evidence, if any, should be filed separately and should not form part of the paper book.

Hearing of the appeal by the ITAT

The ITAT will fix the date of hearing along with the place of hearing the appeal and will also notify the parties.

A copy of memorandum of appeal is to be sent to the respondent either before or along with such notice. The ITAT will hear the appeal on the date fixed. The appeal may be adjourned on other dates and in such a case the appeal will be heard on the respective dates.

If the appellant is called by the ITAT but fails to appear before the ITAT either in person or through an authorized representative, the appeal may be disposed of by the ITAT on merits after hearing the respondent.

Subsequent to ex parte hearing, if the appellant appears before the ITAT and satisfies the ITAT that there was sufficient cause in his case for non-appearance before the ITAT, then set aside the ex parte order and restore the appeal. Similar procedure is applicable where appeal is disposed of in the absence of respondent.

Filing of additional evidence before the ITAT by parties to the appeal is not permitted. In other words, additional evidence of any kind, either oral or documentary cannot be filed before the ITAT. However, if the Tribunal requires production of any document, examination of any witness or filing of any affidavit to enable it to pass orders, it may allow such document to be produced, witness to be examined, affidavit to be filed and such evidence to be adduced.

Order of the ITAT

The member of bench of the ITAT hears the appeal. After hearing the appeal the ITAT will pronounce its order and will communicate the order to the taxpayer as well as the Assessing Officer.

Appeals are heard by a Bench comprising one judicial member and one accountant member. Appeals where total income computed by the Assessing Officer does not exceed Rs. 50 lakh may be disposed of by single member Bench.

If the members of the Bench differ in opinion on any point, the decision is taken on the basis of majority. If members are equally divided in their opinion, the points of difference are stated by each member and the case is referred by the President of the ITAT for hearing such points by one or more of other members of the ITAT. Such point or points is decided according to opinion of majority of the members of ITAT who have heard the case, including those who first heard it.

Normally, the Bench pronounces its orders in Court.However, where the orders are not pronounced in the Court, list of such orders showing results of appeal and signed by members is put up on the notice board of the Bench.

Where it is possible, the ITAT shall dispose off the appeal within a period of four years from the end of the financial year in which appeal is filed.

The ITAT may, on an application made by the taxpayer and after considering the merits of the application, pass an order of stay in any proceedings relating to an appeal filed under section 253(1). The stay order will be in operation for a period not exceeding 180 days from the date of such order. The ITAT shall dispose of the appeal within the said period of stay specified in that order.

However, the stay shall be granted by the ITAT only when the assessee has ‘deposited’ or ‘furnished security’ to the extent of 20% of his tax liabilities (i.e. tax, interest, fee, penalty or any other sum payable under the provisions of this Act). [Inserted by the Finance Act, 2020, Applicable w.e.f. Assessment Year 2020 -21]

If such appeal is not so disposed of within the period of stay specified in the order of stay, the ITAT may extend the stay period, on an application made in this behalf by the taxpayer on being satisfied that the delay in disposing of the said appeal is not attributable to the taxpayer. The extension of stay period can be for a further period or periods, as the ITAT thinks fit, but the aggregate of the period originally allowed and the period or periods so extended or allowed shall not, in any case, exceed 365 days and the Appellate Tribunal shall dispose of the said appeal within the period of stay so extended or allowed.

The ITAT may, at any time within 6 months from the end of the month in which the order was passed, rectify any mistake apparent from record, amend any order passed by it if the mistake is brought to its notice by the taxpayer or Assessing Officer. However, where such amendment has the effect of enhancing an assessment or reducing a refund or otherwise increasing a liability of the taxpayer, it shall not be made unless the Appellate Tribunal has given a notice to the taxpayer of its intention to do so and has allowed the taxpayer a reasonable opportunity.

To impart greater efficiency, transparency and accountability for the purpose of disposal of appeals by the Appellate Tribunal, the Central Government may make a scheme by:

a) Eliminating the interface between the Appellate Tribunal and parties to the appeal in the course of appellate proceedings to the extent technologically feasible;

b) Optimizing utilization of the resources through economics of scale and functional specialization;

The Central Government may, for the purpose of giving effect to the scheme, issue notification in the Official Gazette, to direct that any of the provisions of this Act shall not apply or shall apply with such exceptions, modifications and adaptations as may be specified in the notification.

Such directions are to be issued on or before 31st March, 2023. Further, every notification issued shall, as soon as may be after the notification is issued, be laid before each House of Parliament.

Tags: All about Appeal to Income Tax Appellate Tribunal (ITAT)