Advance Ruling Provisions in the Income Tax Act: An overview 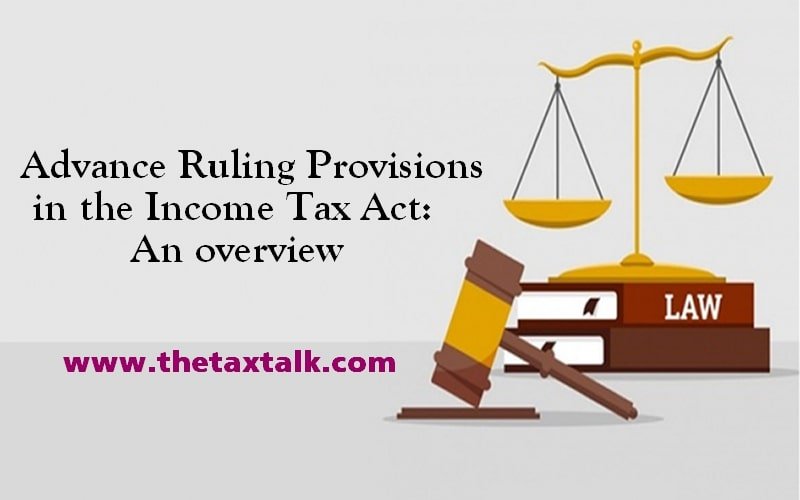 Advance Ruling Provisions in the Income Tax Act: An overview

There are various knowledge sharing materials which are provided by the Income Tax Department for the update of the member. It acts as a guide to the taxpayers, tax professional & tax authorities in making the due compliances. One such knowledge sharing content is with regard to provision related to advance ruling, Form of application, Fees for filing the application, Documents to be submitted along with the application, Procedure to be followed on  receipt of application for advance ruling, Restriction on further procedure, Powers of the AAR etc.

In this part, you can gain knowledge about various provisions relating to advance ruling.

The application for advance ruling can be made by an applicant as defined in section 245N(b). As per section 245N an ‘applicant’ would mean the following:

In Union Budget 2017, the Government had decided to merge the Authority for Advance Ruling (AAR)# for income-tax, central excise, custom duty and service tax. Hence, the meaning of ‘applicant’is expanded with effect from 1/4/2017 to include-

The Finance Act, 2021 has amended provisions of section 245N(b) to provide that above three points shall be omitted with effect from such date as appointed by the Central Government by notification in the Official Gazette.

Certain circumstances in which the application cannot be allowed

In following circumstances the application is not allowed by the AAR:

Fees for filing the application

The fees payable along with application for advance ruling shall be in accordance with the following table:

Documents to be submitted along with the application

The application shall be signed by –

a) In the case of an individual –

i) By the individual himself;

b) In the case of a Hindu Undivided Family–

i) By the karta thereof, and

ii) Where, for any unavoidable reason, it is not possible for the Karta to sign the application, by any other adult member of such family.

ii) Where, for any unavoidable reason, it is not possible for the Managing Director or the Director to sign the application, by any person duly authorised by the company in this behalf. However, in such a case, the person signing the application shall hold a valid power of attorney from the company to do so, which shall be attached to the application.

i) by the managing partner of the firm.

ii) Where for any unavoidable reason such managing partner is not able to sign and verify the application or where there is no managing partner as such, by any partner of the firm other than a minor.

e)In case of an association of persons,the application should be signed by any member of the association or the principal officer thereof.

f) In case of any other person,the application should be signed by that person or by some person competent to act on his behalf.

Add Every application in the form as applicable shall be accompanied by the proof of payment of fees as specified in above table.

Can the application be withdrawn?

Application once made by the applicant can be withdrawn within a period of 30 days from the date of application.

Procedure on receipt of application for advance ruling

The Authority may, after examining the application and the records called for from the Commissioner, either allow or reject the application. The AAR shall not allow the application in certain circumstances (already discussed earlier). However, no application shall be rejected unless an opportunity has been given to the applicant of being heard.

Where the application is rejected, reasons for such rejection shall be given in the order. A copy of every such order shall be sent, both to the applicant and to the Principal Commissioner or Commissioner.

Where an application is allowed, the AAR shall, after examining such further material as may be placed before it by the applicant or obtained by the AAR, pronounce its advance ruling on the question specified in the application.

On a request received from the applicant, the AAR shall, before pronouncing its advance ruling, provide an opportunity to the applicant of being heard, either in person or through a duly authorized representative (The term “Authorised representative” shall have the meaning assigned to it in section 288(2)).

The AAR shall pronounce its advance ruling in writing within six months of the receipt of application.

A copy of the advance ruling pronounced by the AAR, duly signed by the Members and certified in the prescribed manner shall be sent to the applicant and to the Principal Commissioner or Commissioner, as soon as possible, after such pronouncement.

No income-tax authority or the Appellate Tribunal shall proceed to decide any issue in respect to which an application has been made to the AAR by an applicant, being a resident.

The advance ruling pronounced by the AAR shall be binding only on the applicant who had sought it and that too in respect of the transaction in relation to which the ruling had been sought. Further, it shall be binding on the Principal Commissioner or Commissioner and the Income-tax authorities subordinate to him, in respect of the applicant and the said transaction.

Advance ruling to be void in certain circumstances.

Where the AAR finds, on a representation made to it by the Principal Commissioner or Commissioner or otherwise, that an advance ruling pronounced by it has been obtained by the applicant by fraud or misrepresentation of facts, then the Authority may, by an order, declare such ruling to be void ab initio and thereupon all the provisions of the Act shall apply to the applicant as if such advance ruling had never been made.

A copy of the order made as above shall be sent to the applicant and to the Principal Commissioner or Commissioner.

Powers of the AAR

The AAR shall, for the purpose of exercising its powers, have all the powers of a civil court under the Code of Civil Procedure, 1908 as are referred to in section 131 of this Act. Powers vested under section 131 are discovery and inspection, enforcing the attendance of any person, including any officer of a banking company and examining him on oath, compelling the production of books of account and other documents, and issuing commissions. It will also have the power to regulate its own proceeding in all the matters arising out of the exercise of its powers under the Income-tax Act.

Discontinuation of Authority for Advance Ruling

The Finance Bill, 2021 has provided that the Authority for Advance Rulings shall cease to operate with effect from such date, as may be notified by the Central Government in the Official Gazette.

To provide an alternative method of providing prompt advance ruling to the taxpayers, the Finance Bill, 2021 has inserted a new Section 245-OB to empower the Central Government to constitute one or more Board for Advance Rulings for giving advance rulings on and after the notified date. Every such Board shall consist of two members, each being an officer not below the rank of Chief Commissioner.

A new section 245W is inserted by the Finance Act, 2021 to provide for appeal to High Court against the order passed or ruling pronounced by the Board for Advance Ruling or the AO on directions of PCIT or CIT.

This appeal can be filed by the applicant as well as by the Department. Such appeal shall be filed within 60 days from the date of the communication of such ruling or order, in such form and manner as may be prescribed. However, where the High Court is satisfied, on an application made in this behalf, that the appellant was prevented by sufficient cause from presenting the appeal within the period specified in this section, it may allow a further period of 30 days for filing such appeal.

The Central Government shall be empowered to notify a scheme for filing of appeal by the Assessing Officer to impart greater efficiency, transparency and accountability by optimising utilisation of the resources through economies of scale and functional specialisation; introducing a system with dynamic jurisdiction. The Central Government may, to give effect to the scheme, by notification in the Official Gazette, direct that any of the provisions of this Act shall not apply or shall apply with such exceptions, modifications and adaptations as may be specified in the notification. However, no such direction shall be issued after the 31st March 2023.

Every such notification shall, as soon as may be after the notification is issued, be laid before each House of Parliament.