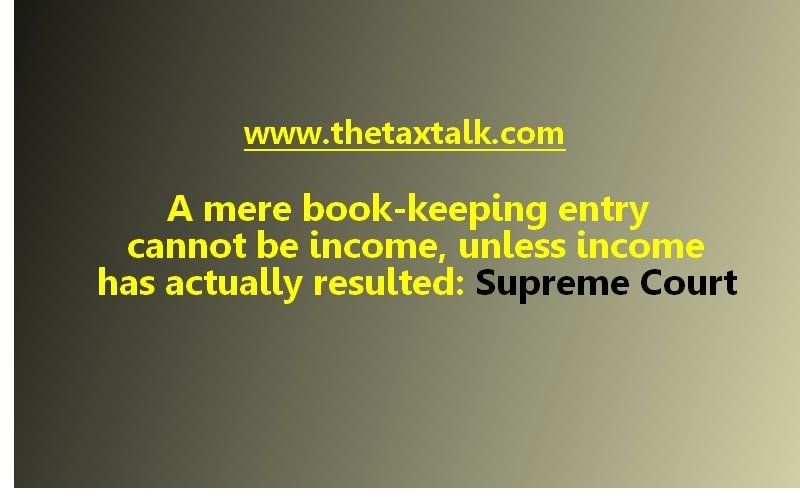 Hon’ble Supreme court in CIT Vs. Shoorji Vallabhdas & co has laid down following principle of law which is relevant in various cases before assessing and appellate authorities. The same is summarized as under:

2. No doubt, the IT Act takes into account two points of time at which the liability to tax is attracted, viz., the accrual of the income or its receipt; but the substance of the matter is the income.

3. If income does not result at all, there cannot be a tax, even though in book- keeping, an entry is made about a “hypothetical income”, which does not materialise.

4. Where income has, in fact, been received and is subsequently given up in such circumstances that it remains the income of the recipient, even though given up, the tax may be payable.

5. Where the income can be said not to have resulted at all, there is obviously neither accrual nor receipt of income, even though an entry to that effect might, in certain circumstances, have been made in the books of account.

6. A mere book-keeping entry cannot be income, unless income has actually resulted

This is an appeal on a certificate of fitness under s. 66A(2) of the Indian IT Act by the High Court of Bombay, against its judgment dt. 1st Oct., 1958. The appellant is the CIT, Bombay, and the respondent, M/s Shoorji Vallabhdas and Co. (referred to hereinafter as the assessee firm).

3. In 1947, the assessee-firm floated two private limited companies, called Shoorji Vallabhdas Ltd. and Pratapsinh Ltd. The assessee-firm desired to substitute these two companies as the managing agents of the shipping companies, one for each, and on 20th Nov., 1947, expressed its desire to resign from the managing agency and to have the private limited companies appointed on the same terms. Two shareholders of the Malabar Steamship Co. Ltd. objected to the rate of commission, and wrote a letter on 27th Nov., 1947, in protest. They suggested that the commission should be either 10 per cent of the profits of the managed company or 2 1/2 per cent. of the freight received. This letter was considered by the board of directors of the Malabar Steamship Co. Ltd., and they invited the assessee-firm to make an offer to reduce the managing agency commission to 2 1/2 per cent. of freight for the current year as also for the future years. As a result, the assessee-firm made an offer as follows :

“That whilst we will continue to insist on our right to receive the full managing commission, however, in order to put the company on a firm financial basis, and because we are interested both as shareholders and managing agents in the prosperity of the company, we shall voluntarily agree to a reduction in the managing agency commission both in respect of the current year as also in future years as may be mutually agreed between the board and ourselves or between the company and ourselves to the extent of 2 1/2 per cent. of the total freight.”

4. A similar procedure was followed in the case of the New Dholera Steamships Ltd., though all the documents are not in the record.

5. On 30th Dec., 1947, extraordinary general meetings of the two managed companies were held, and the two private limited companies were appointed as the managing agents from 1st Jan., 1948. It appears, therefore, that the offer contained in the letter of the assessee-firm was accepted. Later, at the annual general meetings of the two managed companies held in December, 1948, the commission was reduced from 10 per cent of the freight to 2 1/2 per cent as already agreed. As a result, the assessee- firm gave up 75 per cent of its earnings during the relevant years of account, which amounted to Rs. 1,36,903 (Malabar Steamships Co. Ltd.) and Rs. 2,00,625 (New Dholera Steamships Ltd.).

6. In the assessment which followed, the ITO and the AAC came to the conclusion that the amount of larger commission had already accrued during the previous year ending 31st March, 1948, and was thus assessable. The amount given up was also claimed by the assessee-firm as an expenditure under s. 10(2)(xv) of the Indian IT Act, but was disallowed. On appeal to the Tribunal, the Accountant Member was of the opinion that the appeal should be rejected. The Judicial Member, however, took the opposite view. The case was then laid before the President, who agreed with the Judicial Member. According to the President, even though the actual reduction took place after the year of account was over, there was, in fact, an agreement to reduce the commission even during the currency of the account year, and the larger income neither accrued nor was received by the assessee-firm. In accordance with the opinion of the President, the assessment was reduced by deleting the extra commission from the computation. Two questions were, however, referred at the instance of the CIT to the High Court, and they were :

(2) If the answer to the first question is in the affirmative, whether they represent an item of expenditure permissible under the provisions of s. 10(2)(xv) of the Indian IT Act, 1922, in computing the assessee’s income of that ‘previous year’ from its managing agency business?”

7. The High Court agreed with the view of the President, and answered the first question in the negative, and declined to answer the second. The case was, however, certified as fit under s. 66A(2), and the present appeal has been filed.

8. The contentions before us (as also in the High Court) were that the income had already accrued to the assessee-firm in the year of account, and was thus assessable, that the arrangement amounted to a voluntary gift by the assessee-firm to the shipping companies, and that the books being kept on a mercantile basis showed the commission as each amount of freight was entered. It was also contended that the managed companies dealt with the accounts only in December., 1948, long after the previous year was over, and that what had happened in the subsequent year did not alter the position in the relevant previous year.

9. The Bombay High Court relied upon an earlier decision of the same Court reported as CIT vs. Chamanlal Mangaldas & Co. (1956) 29 ITR 987 (Bom) : TC39R.749 and held that the events during the account year were themselves sufficient to show that the income neither accrued to the assessee-firm nor was received by it so as to become assessable. The decision of the Bombay High Court was approved by this Court in CIT vs. Chamanlal Mangaldas & Co. (1960) 39 ITR 8 (SC) : TC39R.745.

10. In CIT vs. Chamanlal Mangaldas & Co. (supra), the assessee was also the managing agent of a company, and under the agreement was entitled to receive commission at a certain rate. By another agreement, the commission earned by the managing agent for the calendar year 1950 was reduced by Rs. 1 lakh. That agreement took place during the previous year, and the resolution of the board of directors of the managed company was also in the previous year. It was, however, made final on 8th April, 1951, at a meeting of the board of directors, but that was beyond the previous year. The High Court of Bombay held that by reason of the resolution during the currency of the previous year, the right of the assessee to commission ceased to be under the original agreement and depended upon and arose only after the decision of the board of directors to reduce the commission. The assessee was, therefore, not held liable on the larger sum which, it was held, was only a hypothetical income, which it might have earned if the old agreement had continued to subsist. The facts of the present case are almost identical, and the principle applied by the Bombay High Court governs this case. The reason is plain. Income-tax is a levy on income. No doubt, the IT Act takes into account two points of time at which the liability to tax is attracted, viz., the accrual of the income or its receipt; but the substance of the matter is the income. If income does not result at all, there cannot be a tax, even though in book- keeping, an entry is made about a “hypothetical income”, which does not materialise. Where income has, in fact, been received and is subsequently given up in such circumstances that it remains the income of the recipient, even though given up, the tax may be payable. Where, however, the income can be said not to have resulted at all, there is obviously neither accrual nor receipt of income, even though an entry to that effect might, in certain circumstances, have been made in the books of account. This is exactly what has happened in this case, as it happened in the Bombay which was approved by this Court. Here too, the agreements within the previous year replaced the earlier agreements, and altered the rate in such a way as to make the income different from what had been entered in the books of account. A mere book-keeping entry cannot be income, unless income has actually resulted, and in the present case, by the change of the terms the income which accrued and was received consisted of the lesser amounts and not the larger. This was not a gift by the assessee-firm to the managed companies. The reduction was a part of the agreement entered into by the assessee- firm to secure a long-term managing agency arrangement for the two companies which it had floated.

11. In our opinion, the High Court was right in coming to the conclusion that on the facts of this case the larger income neither accrued nor was received by the assessee-firm.

12. In the result, the appeal fails, and is dismissed with costs.