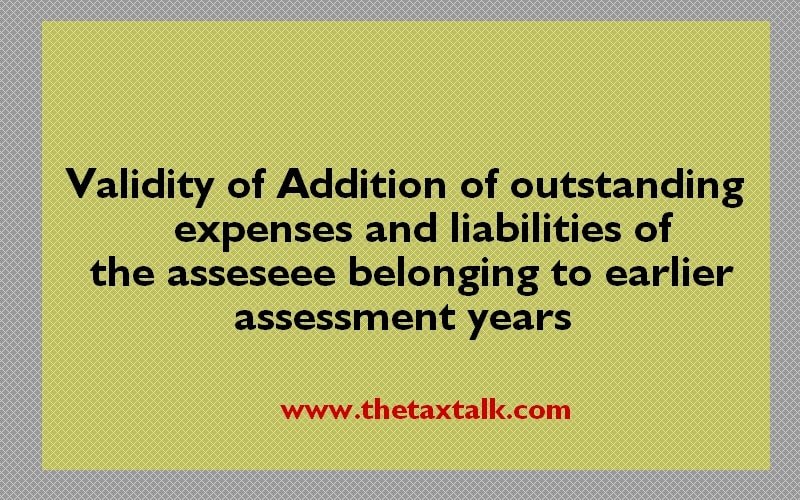 The case involved Addition of outstanding expenses and liabilities of the asseseee belonging to earlier assessment years .
It was contended by the assessee that no particular section has been invoked by the Ld. AO or the Ld. CIT(A) for making this addition and that the only section under which the addition can be made is only u/s. 41(1)
ITAT held that  AO made the addition of all outstanding liabilities except in the case of commission expenses, where both outstanding as well as current year expenses were added as income.
Such additions of outstanding liabilities can be made only u/s. 41(1) of the Act. This section can be invoked only when there is either cessation or remission of the liabilities. It is not the case of the ld. AO or the Ld. CIT(A) that there is cessation of liability in question.
It is true that on a perusal of the nature of the expenses, our conclusion is that there cannot be outstanding for these many number of years.
This indicates that these expenditure is not genuine. Such expenses should not have been allowed in the year in which they were claimed. The AO is correct in doubting the genuine of these expenses. But the problem is that they do not pertain to this asst. year.
The disallowance, if any, has to be made in the year in which they were claimed.
It cannot be taxed as income of this year unless it falls under the provisions of section 41(1) of the Act.
No addition can be made to the income of the assessee in this asst. years, as in the view of the AO the outstanding liability in question is bogus and non-existent.
The question of cessation of such non-existent as bogus liability does not arise. Hence, Sec. 41(1) cannot be applied.
Only when there is a genuine liability and there is cessation of such liability or it is written off in the books of account, then Sec. 41(1) of the Act can be applied.
Law permits the Ld. AO to re-open the assessment for the earlier year and consider whether the expenditure incurred are to be allowable or not and in such cases additions can be made of bogus expenditure.
Thus, in view of the above discussion, we delete all these additions of outstanding liabilities/expenses as appearing in the balance sheet as made by the Ld.AO and confirmed by the Ld. CIT(A) and allow the grounds of the assessee.