Taxing authorities are entitled to look into the surrounding circumstances to find out the reality and the matter has to be considered by applying the test of human probabilities. 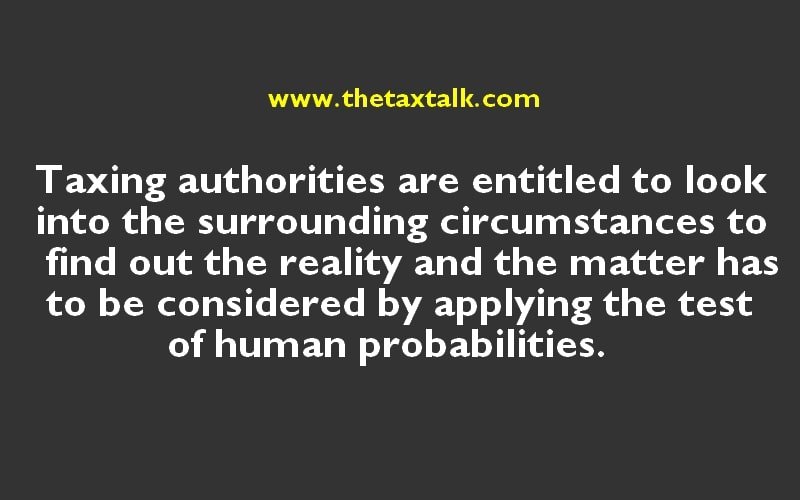 Taxing authorities are entitled to look into the surrounding circumstances to find out the reality and the matter has to be considered by applying the test of human probabilities.

Supreme Court in Sumati Dayal Vs. CIT [ C.A. No.-001344-001345/1977, Dated 28/03/1995] has made an observation that taxing authorities are entitled to look into the surrounding circumstances to find out the reality and the matter has to be considered by applying the test of human probabilities.

An apparent must be considered real until it is shown that there are reasons to believe that the apparent is not the real and that the Test of human probabilities and surrounding circumstances not to be applied in every case without doing groundwork on the file of the AO.

(i) The appellant’s knowledge of racing is very meagre.

(ii) A Jackpot is a stake of five events in a single day and one can believe a regular and experienced punter clearing a Jackpot occasionally but the claim of the appellant to have won a number of Jackpots in three or four seasons not merely at one place but at three different centres, namely, Madras, Bangalore and Hyderabad appears, prime facie, to be wild and contrary to the statistical theories and experience of the frequencies and probabilities.

(iii) The appellant’s books do not show any drawings on race days or on the immediately preceding days for the purchase of Jackpot combination tickets, which entailed sizable amounts varying generally between Rs. 2, 000/- and Rs. 3, 000/-. The drawings recorded in the books cannot be co-related to the various rac- ing events at which the appellant made the alleged winnings.

(iv) While the appellant’s capital account was credited with the gross amounts of race winnings, there were no debits either for expenses and purchases of tickets or for losses.

(v) In view of the exceptional luck claimed to have been enjoyed by the appellant, her loss of interest in races from 1972 assumes significance. Winnings in racing became liable to income tax from April 1, 1972 but one would not give up an activity yielding or likely to yield a large income merely because the income would suffer tax. The position would be different, however, if the claim of winnings in races was false and what were passed off as such winnings really represented the appellant’s taxable income from some undisclosed sources.

Generally we see that the Assessing Officers are applying this SC judgement which is a landmark judgement without thinking that this has to be applied or not. They give reference of this case in cash deposit cases. In my opinion the test of human probability and surrounding circumstances has not to be applied everywhere even where conduct of the assessee remained silent.

The cash deposit is out of the withdrawals from the bank and also business receipts. Assessee never claimed income which is exempt. The question of exempt income is not there but question of entire cash deposit as not taxable income of the assessee.

Assessee has not shown capital receipts in the books but part of the gross receipts or withdrawals from the same bank where cash has been deposited with the bank.

Test of human probabilities is not applicable to the cases of cash deposits and assessment made without gathering the detailed documents. The AO has written in the assessment order that the SC judgement in the case Sumati Dayal is applicable in the case of the assessee. What has been seen by the SC and what has been looked by an AO entirely differs. The broad view has been taken by SC and very narrow view has been taken by an AO. There are some points which entirely differs from the matter narrated in the judgement and narrated by an AO in his order. Test of human probabilities and surrounding circumstances can not be checked merely ion the information of depositing cash with the bank in the normal course of business.

Now question of adequate drawings for purchase of material or cash withdrawn was not utilized some where. The assessee is doing business for the last so many years. He does not lack the necessary knowledge of business. The business done by the assessee can not be compared with the continuous winning at races as many as 16 occassions during a period of less than two years. A business is not done on the basis of luck or chance. It is done on regular basis with motive of earning certain profit. It is never based on jackpot formula. luck formula , chance formula. In trading test of human probabilities shall not arise. At two hundred times assessee can earn profit and it is generally done but at 200 times continuously assessee can not win races. Test of human probabilities shall not arise in the case when assessee is doing regular business.

Regular withdrawls from the banks are made , regular expenses for running the business are done by the assessee. Test of human probabilities shall not arise.

That mere dispute is that she was really winning of the races or not. Winning from race is a special art or work we can say where test is required. In ordinary circumstances and in every case of cash deposit this test should not be applied.

Where it can be applied.

A lady having no education or having no special education takes tuitions and earns income. Here test is applied.

An assessee takes gifts from daughters who are married. Here test is required.

A salaried women takes tuitions at home on part time basis. Here test is required because after job it is next to impossible for a woman to take tuitions at home. She may pass the test or not.

The horse race was made only for two years and when it became taxable wef 1. 4. 1972 it was stopped by the assessee. In cash deposit case assessee has never stopped doing business. Test in this case is not required as it was required in the horse race case.

Then test of human probability and surrounding circumstances has to be applied after recording satisfaction. Merely applying this test shall lead to litigation with no end result for the revenue.

In the case referred above the appellant had not claimed any expenses and losses in races and only winnings were shown. She was not having record of her expenditure but expenditure was met out of her other winnings not shown anywhere. Here test is required. Books and income and expenditure account is never prepared like this that the expenses and losses were met by other winnings. In cash deposit cases not only cash deposit in excess of cash withdrawn is shown but entire cash collected by the assessee is shown as business receipts in his cash flow statement prepared out of the books of accounts. Expenses are also booked. Here test is not required. Always in business when receipts are taken as income then expenses are always booked to arrive at real income. Cash deposit with the bank shall never lead to test of human probabilities and surrounding circumstances.

Whether the apparent is considered as real , apparent must be considered as real until it is shown that there are reasons to believe that the apparent is not real and that the taxing authorities are entitled to look into the surrounding circumstances to find out the reality and matter has to be considered by applying the test of human probabilities. But theory of human probabilities shall not apply when withdrawls are made from the bank , same withdrawls are redeposited , cash deposit is business receipts and cash withdrawls are for business expenses. it is done by so many people. It is not gambling. It is not like that the explanation of the assessee that he found gold on earthing in his drawing room or varanda and sold the gold and entered the sale proceeds to his bank account. when a business is done on regular basis test is not required.

In the above referred case the drawings recorded in the books can not be co related to the various racing events at which the appellant made the alleged winnings.

Assessee has not stopped the business as in the case referred above. She did not take interest in races from 1972 when race horses income became taxable. Test of human probabilities and surrounding circumstances are not to be applied in every case of cash transactions unless groundwork is completed on the file of the AO