Re-opening of assessment is not permissible for mere verification or for a fishing inquiry: High Court 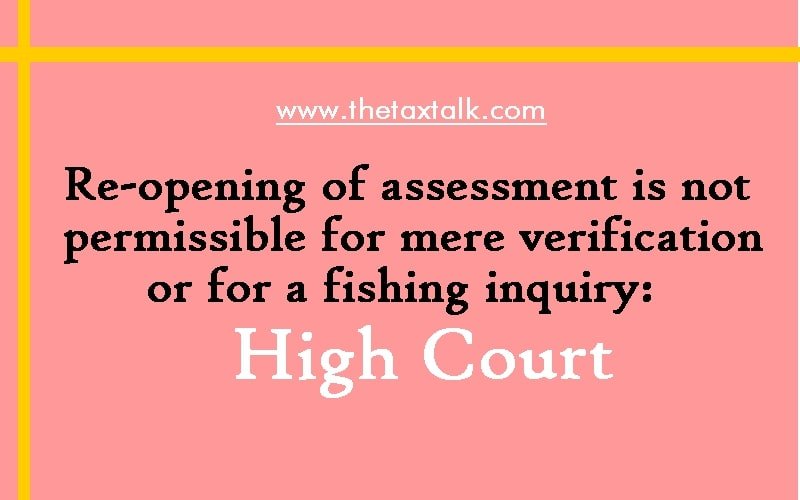 Re-opening of assessment is not permissible for mere verification or for a fishing inquiry: High Court

Key observation by the court is reproduced hereunder :

23. As held by the Supreme Court in Phool Chand Bajrang Lal v. Income-tax Officer, reported in 203 ITR 456 (SC), where transaction itself, on the basis of subsequent information, is found to be a bogus transaction, the Court held that mere disclosure of such transaction at the time of original assessment proceedings cannot be said to be a disclosure of ‘full’ and ‘true’ facts and the Assessing Officer surely would have the jurisdiction to re-open a concluded assessment in such a case. The Supreme Court had also observed in the said case that the Assessing Officer may start reassessment proceedings either because some fresh facts come to light which were not previously disclosed, or some information with regard to the facts previously disclosed comes into his possession which tends to expose the untruthfulness of those facts. In such situations, it is not a case of mere change of opinion or drawing of a different inference from the same facts as were earlier available but acting on fresh information. Since the belief is that of the Income-tax Officer, the sufficiency of reasons for forming the belief is not for the Court to judge but it is open to an assessee to establish that there, in fact, existed no belief or that the belief was not at all a bona fide one or was based on vague, irrelevant and non-specific information. To that limited extent, the Court may look the conclusion arrived at by the Income-tax Officer and examine whether there was any material available on the record from which the requisite belief could be formed by him and further whether that material had any rational connection or a live link with the formation of the requisite belief.
24. The issue of sanction under section 151 of the Act raised by the writ-applicant is without any foundation. This aspect has been dealt with by the Revenue in the affidavit-in-reply, more particularly, in paragraph-11.
25. In the overall view of the matter, we are convinced that we should not interfere with the impugned notice.
26. In the result, this writ-application fails and is hereby rejected. However, so far as the final order of assessment is concerned, it shall be open for the writ-applicant to challenge the same by filing an appeal before the CIT(A), in accordance with law.
27. We have not gone into the merits of the impugned assessment order. If any appeal is preferred by the writ-applicant, then the appellate authority shall decide the same on its own merits without being influenced in any manner by any of the observations made by this Court.
28. Notice stands discharged. Ad-interim relief earlier granted stands vacated.

In short, the court concluded as under:

For mere verification or for a fishing inquiry re-opening of assessment is not permissible, however, where there was tangible material as on date in hands of Assessing Officer that assessee had received shareholders funds from shell companies, and Assessing Officer, after due application of mind, had recorded a satisfaction of his own that income had escaped assessment, reopening of assessment was justified.
Where transaction is found to be a bogus transaction on the basis of subsequent information, it cannot be said to be a disclosure of ‘full’ and ‘true’ facts: Reassessment by AO justified.