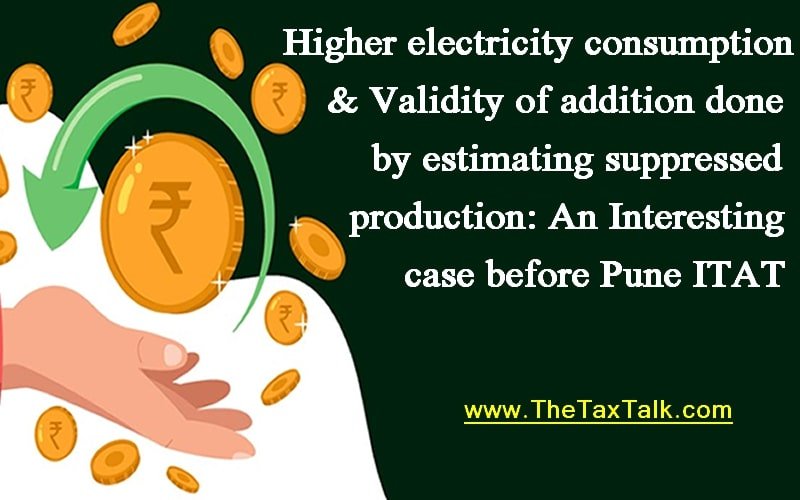 ITAT held it in favour of Assessee by saying No. It observed as under:

in assessee’s own case as relied by the AR at Page No. 3 of the paper book we note that this Tribunal in Revenue’s appeal held the order of CIT(A) is fair and reasonable on the issue where the AO proceeded to estimate the net profit on alleged suppressed production. It was held that “…”5. ………. Since the facts were identical to that of the case decided by the Tribunal, therefore, following the decision of the Coordinate Bench of the Tribunal in the case of Bhagyalaxmi Steel Alloys Pvt. Ltd. ITA Nos. 1292/PN/2012 and in absence of any contrary material brought to its notice, the grounds raised by the Revenue were dismissed by the ITAT, Pune and the addition sustained by the CIT(A) was also deleted.
Accordingly the appeal of the Revenue was dismissed. Reverting back to the present case, the Assessing Officer had made the addition of Rs. 4,38,86,292/- on the basis of wrong presumption/assumptions. I find it quite baffling that the A.O. had levelled the allegation of unrecorded sales against the appellant company on the basis of some mathematical exercise without any corroborative evidence on record. This allegation of the A.O. has remained unsubstantiated and it is nothing more than a sweeping statement.
The production of the assessee company is liable to Central Excise Duty and hence, the assessee has also maintained records and register as prescribed under Central Excise Act. Considering the judicial ratios, it is clear that no addition can be made merely on basis of electricity consumption formula.
This view is also supported by the decisions of various Tribunals such as Janta Tiles vs ACIT (66 TTJ 695) (Jurisdictional Pune Bench); DCIT Kolapur vs J. D. Thote Dairies (Jurisdictional Pune Bench in ITA No 115/PN/2000 decision dated 31/05/2011); Roop Niketan vs ACIT (90 TTJ 1097) (Mumbai Bench) and ITO vs Gurubachansingh Juneja (55 ITD 75).
Respectfully following the above decisions and the facts & circumstances of the present case, I direct the AO to delete the addition of Rs. 4,38,86,292/- made by him. This ground of appeal is accordingly allowed…”; hence the addition made on account of suppressed production on the basis of electricity consumption is liable to be deleted.