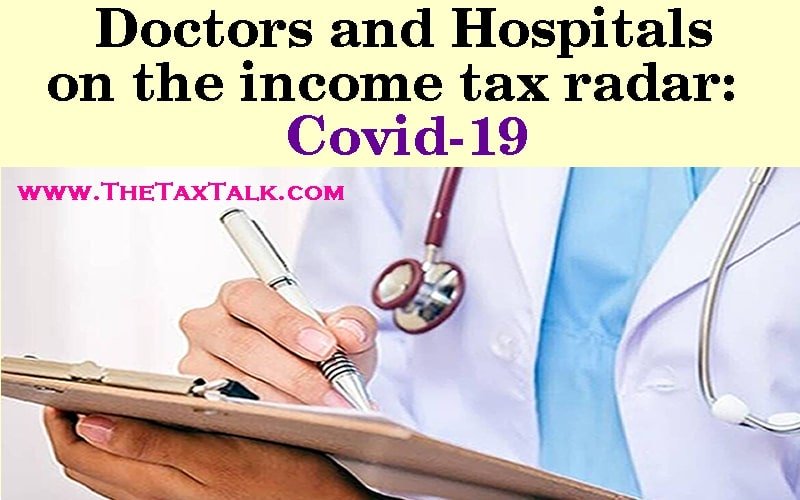 Doctors and Hospital are on the income tax radar and the impact would be visible after the current pandemics situation comes to an ease. There are a lot many complaints and tax evasions that are filed with the income tax department for excessive charging during the current phase of the pandemics.

The complaints received by the income tax departments are on various fronts & sources:

It may be noted that the tax laws have changed in such a way that the cost of penalty and fine is more than the cost of the tax. Further, the recent action by the department proves that the Government & the department is after “prosecution” and not only concerned by tax and penalty alone.  Even smaller cases of tax evasions are treated very stringently by the department. The tax administration in the developed nation is acting tough against tax evasion and India is on the same footsteps.

The question arises as to how the department can establish tax evasion in such cases. Is it not a tough task even if there are no papers, records & documents at the hospital premises in such cases?

One must understand that the departments have their own mode of working and establishing tax evasion in such cases. Citizens may recall the period of demonetization wherein huge amounts of cash was accepted by jewellers & few businessmen at those times. Despite due planning by all such taxpayers, the department was able to establish the trail and the taxpayers were asked to pay income tax @ 78% and not 30%.

In the present case of doctors and hospitals, the following mechanism can be used by the department to track the cases of tax evasions:

There is no smoke without fire. If the fire is there, smoke is going to be there. This is what the department has proved in the past. This is the time when taxpayers have to be honest in declaring their income and maintaining the transparency in the transactions. Let us pay what is due to the Government. Peace of Mind is better than Money now. At lease in view of the latest tax laws & technology wherein it is easy to establish the tax evasions instances.

Hold on for the next move of the department.

Tags: Doctors and Hospitals on the income tax radar: Covid-19