Department cannot attach property of any person, other than ‘taxable person’ merely on pretext of protecting their interest: Delhi HC calls it a draconian step 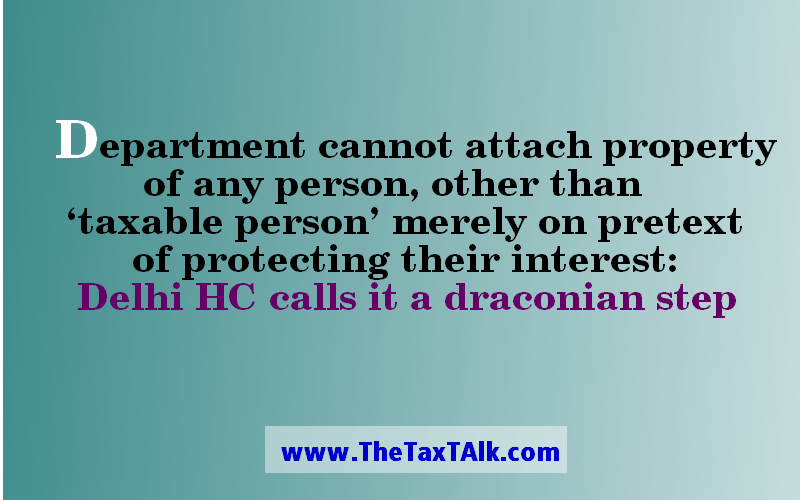 Department cannot attach property of any person, other than ‘taxable person’ merely on pretext of protecting their interest: Delhi HC calls it a draconian step

The Delhi High Court recently in case of Roshni Sana Jaiswal versus Commissioner of Central Taxes, GST Delhi (East) [2021-juristway.com-871-HC(Delhi)-GST], ruled that the absence of any material, the action concerning provisional attachment of the petitioner’s bank accounts, which is otherwise a “draconian” step, was unsustainable.

The Division Bench of Justice Talwant Singh& Justice Rajiv Shakdher, observed that in the zeal to protect the interest of the revenue, the respondent could not attach any and every property, including bank accounts of persons, other than the taxable person.

According to the Bench, the submission advanced by respondent-counsel, that the instant petition under Article 226 of the Constitution, should not be entertained as recourse to an alternate remedy was taken by the petitioner, does not impress, since the exercise of power u/s 83 of the Act, to begin with, was without jurisdiction.

“The fact that an alternate remedy is available to a litigant is a self-imposed limitation on the Court; something which did not deter the Court, when notice was issued in the matter, in the first instance, perhaps, given the assertions made in the petition. The Court can, and should exercise its powers, under Article 226 of the Constitution, amongst others, in cases where the action or order concerned is without jurisdiction” stated the Bench.

In the present case, one of the jurisdictional ingredients’, which was missing, was that the petitioner was not a taxable person. This aspect was borne out upon perusal of the orders, which are identical. In the orders dated Dec 07, 2020, the respondent adverted to the fact that Milkfood Ltd. was the taxable person.

The High Court said that Section 83(1) of the Act in no uncertain terms states that provisional attachment can be ordered only qua property, including bank account, belonging to the taxable person. Furthermore, the definition of the “taxable person‟, as set out in Section 2(107) of the Act, provides that only that person can be a taxable person, who is registered or liable to be registered as per the Act.

Now, the Court found that it was not even the case of the respondent that the petitioner was either registered or was liable to be registered in terms of the provisions of Section 2(107) of the Act.

As far as the other submissions were concerned, as to whether or not it could be said that the proceedings u/s 67 of the Act were pending, the same, in the view of the Division Bench, need not detain. No material was placed, which would show that the concerned officer, before triggering the provisions of Section 83 of the Act, had applied his mind to the other important aspect, which was, that the provision had to be taken recourse to, to protect the interest of the revenue.

The Bench said that in the counter-affidavit, the only aspect that the respondent had pointed out qua the petitioner was the “voluntary” statement made by her on Dec 03, 2020.

In the Court’s opinion, there was nothing in the statement of the petitioner, which would show, that she had anything to do with the purported illegal transaction said to have been carried out between Milkfood Ltd. [i.e., the taxable person], and its suppliers.

Thus, the Division Bench said that in the absence of such material, the action concerning provisional attachment of the petitioner’s bank accounts, which was otherwise a “draconian” step, was unsustainable.

Tags: Department cannot attach property of any personother than ‘taxable person’ merely on pretext of protecting their interest: Delhi HC calls it a draconian step