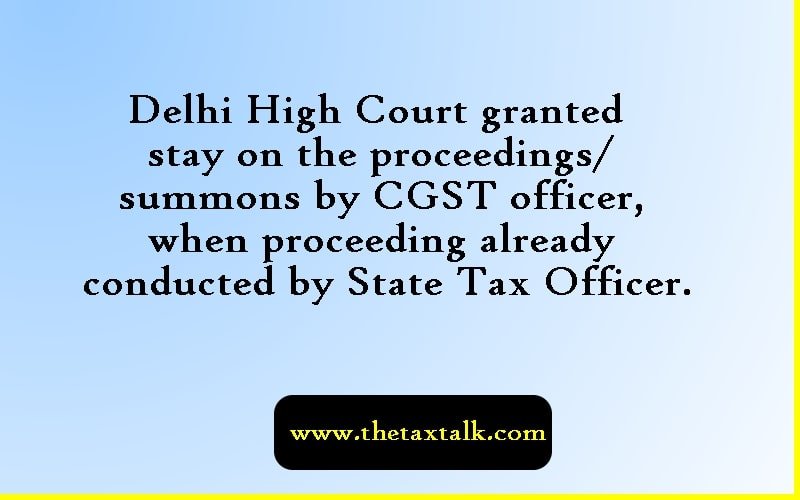 In an important verdict argued by Adv. CA J.K. Mittal Ji in the case of Koenig Solutions Private Limited Vs Union Of India & Ors, Delhi High Court granted stay on the proceedings & summons by CGST officer for the reason that the proceeding already conducted by State Tax Officer.

The complete order is produced hereunder:

2.1 Amongst other grounds, Mr. Mittal says, the summons have been issued without jurisdiction, inasmuch as inquiry for the same period, i.e., financial year 2017-2018, was carried out by the State Tax authority; whereupon after receipt of a reply from the petitioner, the same was closed.

2.4 Mr. Mittal also emphasizes the fact, as noticed above, that, pursuant to the reply submitted by the petitioner, the show-cause notice issued by the concerned authority, was closed.

2.6 It is for these reasons, Mr. Mittal says, that the impugned summons dated 30.03.2021 are without jurisdiction.

“(1) Without prejudice to the provisions of this Act, the officers appointed under the State Goods and Services Tax Act or the Union Territory Goods and Services Tax Act are authorised to be the proper officers for the purposes of this Act, subject to such conditions as the Government shall, on the recommendations of the Council, by notification, specify.

(2) Subject to the conditions specified in the notification issued under sub-section (1),–

6.1 For the sake of convenience, the exact words used in the impugned summons are set forth hereafter [Page 71 of the electronic paper book]:

Tags: Jurisdiction in GSTSection 6(2)(b)