Audited books cannot be rejected in such a casual manner. Ad hoc disallowances are arbitrary and cannot be upheld. 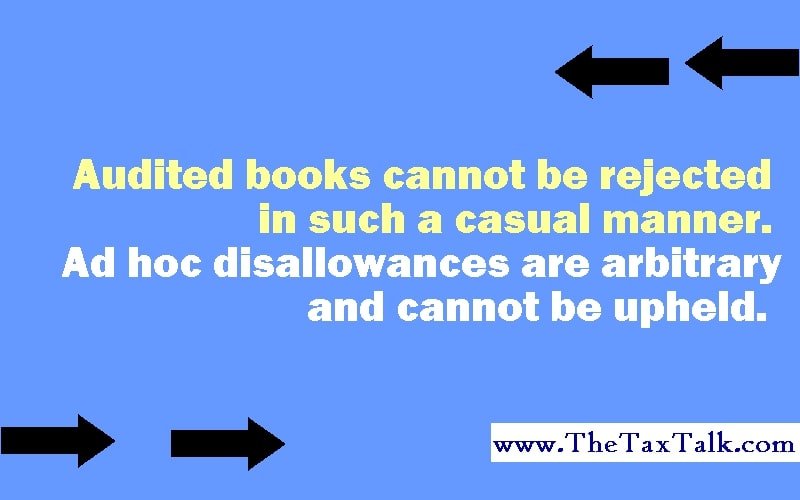 Audited books cannot be rejected in such a casual manner. Ad hoc disallowances are arbitrary and cannot be upheld.

This is not permitted in law.
CIT(A) rejected the books of accounts. When the Assessing Officer has not rejected the books of accounts of the assessee, we find no proper reason recorded by the ld. CIT(A) for rejecting the books of accounts.
No defects have been pointed out in the books of accounts.
The company is a Government company and its accounts are audited both by the statutory auditors as well as C&AG.
Such audited books cannot be rejected in such a casual manner.
Ad hoc disallowances are arbitrary and cannot be upheld.
Under the circumstances, we are of the considered opinion that the entire disallowance made by the Assessing Officer on the ground of cessation of unascertained liability is hereby deleted.
The ground of the revenue is dismissed and the ground no.1 to 6 of the assessee’s appeal are allowed.
Another issue was with respect to disallowance of Stale Cheque.
AR has submitted that the assessee from time to time transfers the stale cheque money back to its accounts if the amount has not been claimed
Also that, if at all the addition was to be made it cannot be made in the current year but should be made in the year in which these liabilities have arisen

The assessee is a public sector company, audited by C&AG.
The assessee has been following regular system of crediting stale cheques back to the accounts as and when it thinks that the liability has ceased to exist.
Therefore, in view of the consistent accounting system followed by the assessee and also due to judgment cited GOODRICKE GROUP LIMITED [2011 (5) TMI 127 – CALCUTTA HIGH COURT] and M/S. DLF LIMITED [2016 (3) TMI 679 – ITAT DELHI] the additions could not have been made in the current year.
In view of the above, I agree with the contention of the A/R.
Third issue was with regard to addition made in the assessment order of interest on income-tax refund.
Assessee’s case is that the interest of income tax refund is reflected as income during the assessment year 2017-18 i.e. when the interest was received and hence an addition of the same amount in the assessment year 2014-15 would tantamount to double addition.

On this issue, ITAT observed as under:

We restore this issue to the file of the Assessing Officer for verification.
In case the interest to income tax refund has been considered as income of the assessee for the assessment year 2017-18, then no separate addition can be made in this year.

Tags: Audited books cannot be rejected in such a casual mannervalidiry of Adhoc disallowances