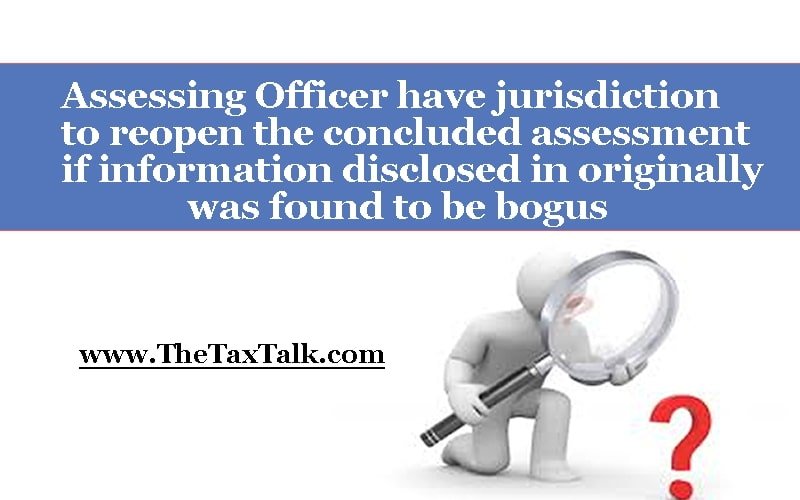 Return was accepted without scrutiny under Section 143(1)

Assessee has entered into a bogus / accommodation entry transaction

HC held that since there was no scrutiny assessment, the Assessing Officer had no occasion to form any opinion on any of the issues arising out of the return filed by assessee.

The concept of change of opinion would, therefore, have no application.

It is equally well settled that at the stage of re-opening of the assessment, the court would not minutely examine the possible additions which the Assessing Officer wishes to make.

The scrutiny at that stage would be limited to examine whether the Assessing Officer had formed a valid belief on the basis of the material available with him that the income chargeable to tax had escaped assessment.

In the present case, the Assessing Officer has considered the material on record which would prima facie suggest that the assessee had sold number of shares of a company which was found to be indulging in providing bogus claim of long term and short term capital gain.

The company was prima facie found to be a shell company.

The assessee had claimed exempt of long term capital gain by way of sale of shares of such company.

The two situations are distinct and different.

Thus, where the transaction itself on the basis of the subsequent information, is found to be a bogus transaction, the mere disclosure of that transaction at the time of original assessment proceedings, cannot be said to be disclosure of the “true” and “full” facts in the case and the I.T.O. would have the jurisdiction to reopen the concluded assessment in such a case.

It is correct that the assessing authority could have deferred the completion of the original assessment proceedings for further enquiry and investigation into the genuineness to the transaction, but, in our opinion, his failure to do so and complete the original assessment proceedings would not take away his jurisdiction to act under Section 147 of the Act, on receipt of the information subsequently.

The subsequent information on the basis of which the I.T.O. acquired reasons to believe that the income chargeable to tax had escaped assessment on account of the omission of the assessee to make a full and true disclosure of the primary facts was relevant, reliable and specific.

It was not at all vague or non-specific.

On the Validity of the sanction, the court observed as under :

Entire proposal along with the necessary details and the reasons recorded by the Income Tax Officer were placed before the Joint CIT and Principal CIT, who, upon perusal of the same, in their own hands, recored their satisfaction that it was a fit case for issuance of notice under Section 148 of the Act.

I.T.O. would have the jurisdiction to reopen the concluded assessment if information disclosed in original assessment was found to be bogus