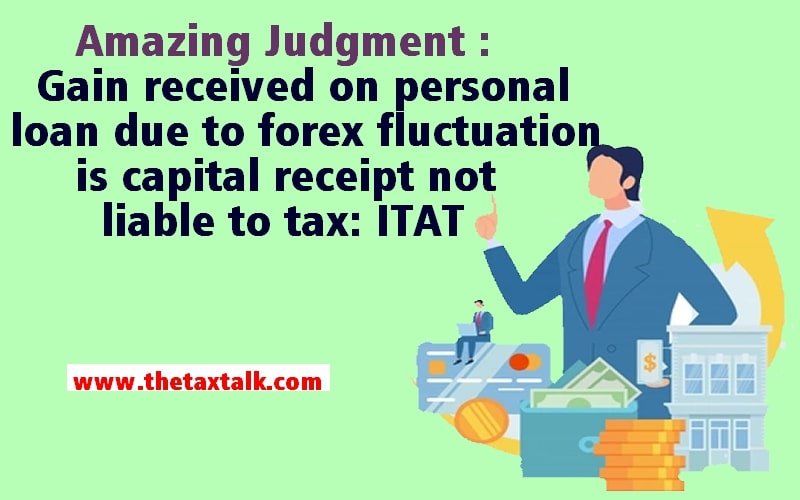 During the scrutiny assessment, Assessing Officer (AO) notices that as per AIR information and as per the capital account of assessee, assessee received Rs. 1,12,35,326.
When AO probed this entry further, assessee explained that he had extended a personal interest-free loan to his cousin in Singapore.
The remittance was made under the LRS (Liberalized Remittance Scheme) issued by the Reserve Bank of India.
Due to a change in the exchange rate, the amount received on repayment was more than the amount originally advanced.
AO opined that such a difference on account of this transaction was of income nature.
Assessee submitted that the loan account was purely personal.
It was not in the nature of a business transaction.
There was no motive for economic gains in this transaction.
The loan transaction was in terms of LRS, and it was a permitted Capital Account transaction.
It was further explained that the transaction was in the capital field, and therefore the gain is in the nature of capital receipt and hence not offered for taxation.
AO didn’t accept assessee’s contentions and made additions to the income of assessee.
On appeal, Mumbai ITAT held that even before deciding whether the gain was of income nature, AO had proceeded to put the cart before the horse by deciding the head under which the income is to be taxed.
He mixed up the concept of income with the concept of gains.
In the case of Shaw Wallace & Co Ltd v. DCIT [2001] 117 Taxman 192 (Calcutta), Calcutta ITAT held that a capital receipt, in principle, is outside the scope of income chargeable to tax.
A receipt cannot be taxed as income unless it is in the nature of a revenue receipt or is specifically brought within the ambit of income by way of specific provisions of the Income-tax Act.
AO had accepted that the transaction was in the capital field and proceeded to hold that income arising out of the loan transaction was required to be treated as interest or income from other sources.
If the transaction was in the capital field, where the question of a capital receipt being taxed as income arises unless there was a specific provision of bringing such a capital receipt to tax.
In any case, where the loan was foreign currency-denominated and the amount advanced as loan, as also received back as repayment, was exactly the same, there was no question of interest component at all.
The benefit or gain received by assessee was on account of foreign exchange fluctuation.
Since the foreign exchange fluctuation was with respect to a transaction in the capital field, the foreign exchange fluctuation receipt itself turned out to be a capital receipt.

Tags: Amazing Judgment : Gain received on personal loan due to forex fluctuation is capital receipt not liable to tax: ITAT