Agenda of the GST Council Meeting Cannot be shared in view of exemption: Reply to RTI Application 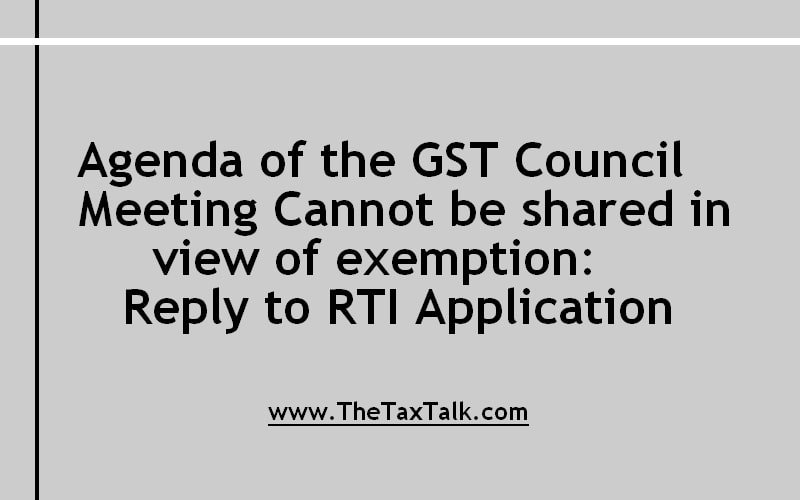 Agenda of the GST Council Meeting Cannot be shared in view of exemption: Reply to RTI Application

The reply given was

Section 8 of the RTI Act is as under:

Section 8 in The Right To Information Act, 2005 reads as under:

(1) Notwithstanding anything contained in this Act, there shall be no obligation to give any citizen,—

(a) information, disclosure of which would prejudicially affect the sovereignty and integrity of India, the security, strategic, scientific or economic interests of the State, relation with foreign State or lead to incitement of an offence;

(b) information which has been expressly forbidden to be published by any court of law or tribunal or the disclosure of which may constitute contempt of court;

(c) information, the disclosure of which would cause a breach of privilege of Parliament or the State Legislature;

(e) information available to a person in his fiduciary relationship, unless the competent authority is satisfied that the larger public interest warrants the disclosure of such information;

(g) information, the disclosure of which would endanger the life or physical safety of any person or identify the source of information or assistance given in confidence for law enforcement or security purposes;

(h) information which would impede the process of investigation or apprehension or prosecution of offenders;

(i) cabinet papers including records of deliberations of the Council of Ministers, Secretaries and other officers: Provided that the decisions of Council of Ministers, the reasons thereof, and the material on the basis of which the decisions were taken shall be made public after the decision has been taken, and the matter is complete, or over: Provided further that those matters which come under the exemptions specified in this section shall not be disclosed;

(j) information which relates to personal information the disclosure of which has not relationship to any public activity or interest, or which would cause unwarranted invasion of the privacy of the individual unless the Central Public Information Officer or the State Public Information Officer or the appellate authority, as the case may be, is satisfied that the larger public interest justifies the disclosure of such information: Provided that the information, which cannot be denied to the Parliament or a State Legislature shall not be denied to any person.

(2) Notwithstanding anything in the Official Secrets Act, 1923 (19 of 1923) nor any of the exemptions permissible in accordance with sub‑section (1), a public authority may allow access to information, if public interest in disclosure outweighs the harm to the protected interests.

(3) Subject to the provisions of clauses (a), (c) and (i) of sub‑section (1), any information relating to any occurrence, event or matter which has taken place, occurred or happened twenty years before the date on which any request is made under section 6 shall be provided to any person making a request under that section: Provided that where any question arises as to the date from which the said period of twenty years has to be computed, the decision of the Central Government shall be final, subject to the usual appeals provided for in this Act.

The copy of the reply is as under: 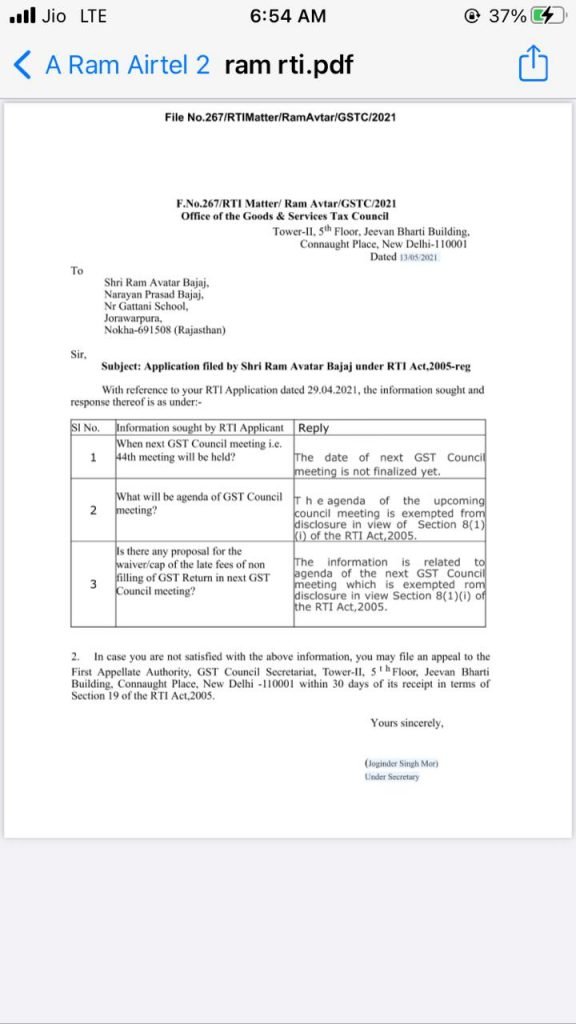 Tags: Agenda of the GST Council Meeting Cannot be shared in view of exemption: Reply to RTI Application