Whether turnover is relevant criterion for choosing entities as comparables in determination of ALP in transfer pricing cases? 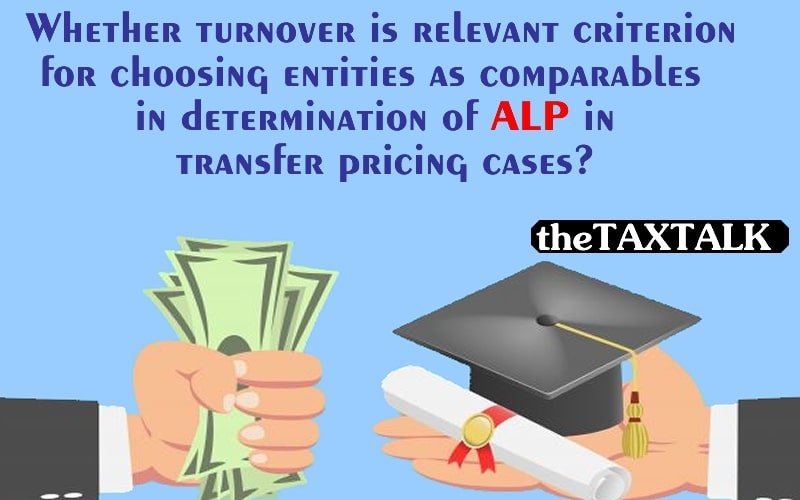 Whether turnover is relevant criterion for choosing entities as comparables in determination of ALP in transfer pricing cases?

The assessee in engaged in the business of provision of Software Development Services to its wholly owned holding company.
It had file a TP Study to justify the price paid in the international Transaction as at ALP by adopting the TNMM as MAM and OP/OC as the PLI for purpose of comparison.
The OP/OC of the assessee was arrived at 16.59% by the assessee in its TP study. The operating income was Rs. 119,38,25,958/- and the Operating Cost was Rs. 102,40,13,273/-.
The Operating profit was Rs. 16,98,12,685/-. Thus the OP/TC was arrived at 16.58%.
The assessee chose companies who are engaged in providing similar services such as the assessee. The assessee identified comparable companies whose average arithmetic mean of profit margin was comparable with the Operating margin of the Assessee.
The Assessee therefore claimed that the price it charged in the international transaction should be considered as at Arm’s Length.
The TPO to whom the determination of ALP was referred to by the AO, accepted TNMM as the MAM and also used the same PLI for comparison i.e., OP/TC. He also selected comparable companies from database.
The TPO on his own identified 7 companies as comparable with the Assessee company and worked out the average arithmetic mean of their profit margins. Finally, a sum of Rs 3,71,50,173/- was added to the total income of Assessee on account of determination of ALP for provision of SWD services by the Assessee to its AE.
On appeal, the ITAT on the issue as to whether turnover is relevant criterion for choosing entities as comparables in determination of ALP in transfer pricing casesn held it as yes.

It observed as under :

+ as far as excluding the companies on the basis of turnover is concerned, the issue has been settled in several decisions of the Tribunal and has been elaborately discussed by this Tribunal in the case of Autodesk India Pvt. Ltd. v. DCIT in IT(TP)A No. 540 & 541/Bang/2013. The Tribunal in this decision after review of entire case laws on the subject, considered the question, whether companies having turnover more than 200 crores upto 500 crores has to be regarded as one category and those companies cannot be regarded as comparables with companies having turnover of less than 200 crores, the Tribunal held that: “….The substantial question of law which was framed by the Delhi High Court in the case of Chryscapital Investment Advisors (India) Pvt. Ltd., was as to whether comparable can be rejected on the ground that they have exceptionally high profit margins or fluctuation profit margins, as compared to the Assessee in transfer pricing analysis. Therefore as rightly submitted by the counsel for the Assessee the observations of the High Court, in so far as it refers to turnover, were in the nature of obiter dictum. Judicial discipline requires that the Tribunal should follow the decision of a non-jurisdiction High Court, even though the said decision is of a non-jurisdictional High Court. However find that the Bombay High Court in the case of CIT Vs. Pentair Water India Pvt. Ltd – 2015-TII-53-HC-MUM-TP has taken the view that turnover is a relevant criterion for choosing companies as comparable companies in determination of ALP in transfer pricing cases. There is no decision of the jurisdictional High Court on this issue. In the circumstances, following the principle that where two views are available on an issue, the view favourable to the Assessee has to be adopted, we respectfully follow the view of the Bombay High Court on the issue….” Respectfully following the said decision, such companies should be excluded from the list of comparable companies.

Tags: Whether turnover is relevant criterion for choosing entities as comparables in determination of ALP in transfer pricing cases?