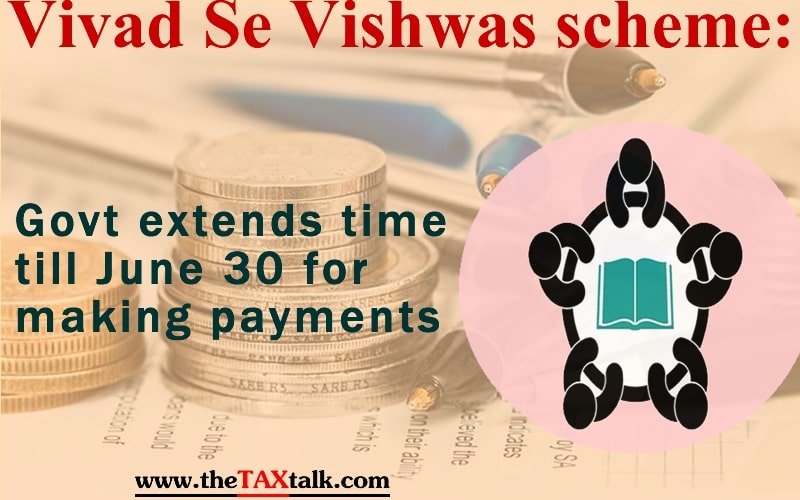 The government on Saturday extended the deadline for making payment under the direct tax dispute resolution scheme Vivad Se Vishwas by two months till June 30 to ease hardships faced by taxpayers amid the pandemic.

Also, it has extended the due date for issuance of notice for reopening of assessment by tax officers where income has escaped assessment and sending intimation of processing of Equalisation Levy till June 30.

“It has also been decided that time for payment of amount payable under the Direct Tax Vivad se Vishwas Act, 2020, without an additional amount, shall be further extended to 30th June 2021,” Central Board of Direct Taxes (CBDT) said in a statement.

The deadline for filing declaration under the scheme ended on March 31.

The taxpayer is granted immunity from levy of interest, penalty and institution of any proceeding for prosecution for any offence under the Income-tax Act in respect of matters covered in the declaration.

CBDT said it had received requests from taxpayers, tax consultants and other stakeholders to extend time barring dates in view of the severe COVID-19 pandemic raging unabated across the country.

“In the light of several representations received and to address the hardship being faced by various stakeholders, the Central Government has decided to extend the time limits to June 30, 2021, in the following cases where the time limit was earlier extended to April 30, 2021, through various notifications issued under the Taxation and Other Laws (Relaxation) and Amendment of Certain Provisions Act, 2020,” CBDT said.

The scheme had netted about Rs 54,000 crore to the exchequer till early April and more is expected to come in based on the declarations already filed.