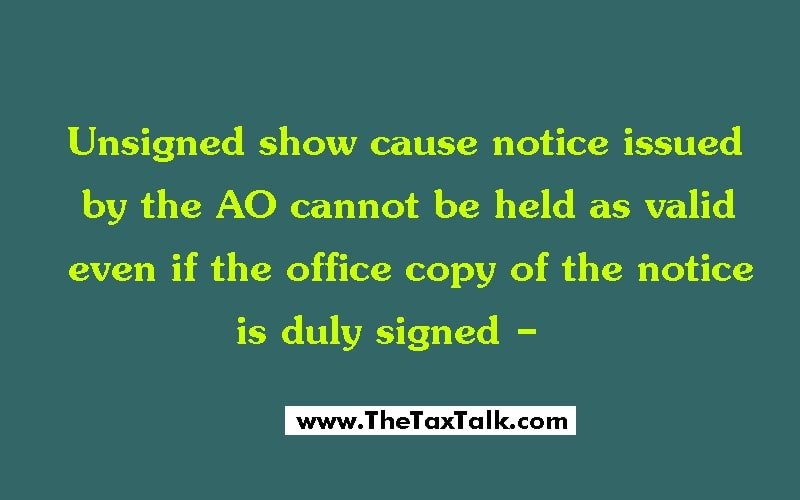 The assessee was engaged in the business of Manufacture of Transformers primarily meant to be supplied to the Government Departments.

The AO in the Assessment Order has stated that during the Inspection of Assessment records it was noticed that the Assessee has failed to disallow payments made to the Contractors and Sub-Contractors without deducting taxes as per the Provisions of Section 40a(ia) of the Income-tax Act, 1961. The taxes were required to be deducted u/s. 194C of the Act.

Therefore, the AO initiated Rectification Proceedings u/s. 154 of the Act by issue of a notice dated 28-09-2011 proposing to rectify an alleged mistake in the Assessment Order as regards the expenditure allowed amounting to Rs. 7,97,23,805/- being the Labour Charges paid without deduction of Tax at Source as required u/s. 194C of the Act. A notice dated 28-09-2011 is said to have been issued u/s. 154 of the Act.

The issue before ITAT was whether an unsigned show cause notice issued by the AO can be held as valid, particularly when the office copy of the notice is duly signed.

ITAT held as No.

Key observation by ITAT were as under:

notice in all the cases show that the said notice issued u/s. 148 of the Act was typed on a plain paper, it was not signed by the Assessing Officer who issued the same and remained unsigned which is not in dispute before us.

The contention of the Revenue is that the office copy of the said notice was duly signed by the AO. This notice issued u/s. 148 is a manual notice and not a digital document.

The digital document only does not require signature. A manual notice u/s. 148 is required to be dated and duly signed by the Officer who is issuing the same.

A notice or an order without having signature of the person who issued such notice loses its relevance and importance and is to be treated as invalid.

An order or notice without signature is not an order for execution or implementation. In all these cases, there was no signature of the AO who issued notice u/s. 148 of the Act.

Therefore, it has to be construed that no notice was issued by the AO to the assessee and the assessee was continuously objecting for the same.

Further, in our opinion, service of valid notice is a pre-condition to assume jurisdiction by the AO.

Non-signing of a notice is not a clerical mistake and there cannot be any waiver by the assessee of an irregularity of an unsigned notice.

Section 282 of the Act provides that a notice under the Act may be served on the person name therein as if it were a summons issued by a court under the Code of Civil Procedure, 1908.

Sub-rule (3) of Rule 1 of Order 5, CPC, provides that every summons shall be signed by the judge or such officer, as he appoints. In view of this provision, the notice issued u/s. 148 should have been signed by the AO and omission to do so invalidate the notice.

Further, the provisions of section 292B of the Act intended to ensure that an inconsequential technicality does not defeat justice.

But, the signing of a notice under section 148 of the Act is not merely an inconsequential technicality. It is a requirement of the provisions of Order 5, Rule 1(3) of CPC, which are applicable by virtue of Section 282 of the Act.

Under the circumstances, the provisions of section 292B of the Act would not be attracted so as to make it as a valid notice in the eye of law.

Therefore, the requirement of the signature of the AO is a legal requirement. The omission to sign the notice u/s. 148 cannot be cured by relying on the provisions of section 292B of the Act.

The notice issued by the AO without affixing signature, cannot be said to be an omission, which was sought to be covered by the provisions of section 292B of the Act.

If such a course is permitted to be followed, then that would amount to miscarriage of justice.

An unsigned notice of reopening of assessment cannot be said to be in substance and effect in conformity with or according to the intent and purpose of the Act.

The provisions of section 282A of the Act is of no assistance to the department and it would be applicable only to a CPU which was nominated as designated authority by CBDT as required u/s. 282A of the Act.

Therefore, we are of the opinion that the assessment framed on the basis of unsigned notice u/s. 148 is bad in law and cannot be sustained in the eyes of law.

Tags: Unsigned show cause notice issued by the AO cannot be held as valid even if the office copy of the notice is duly signed -