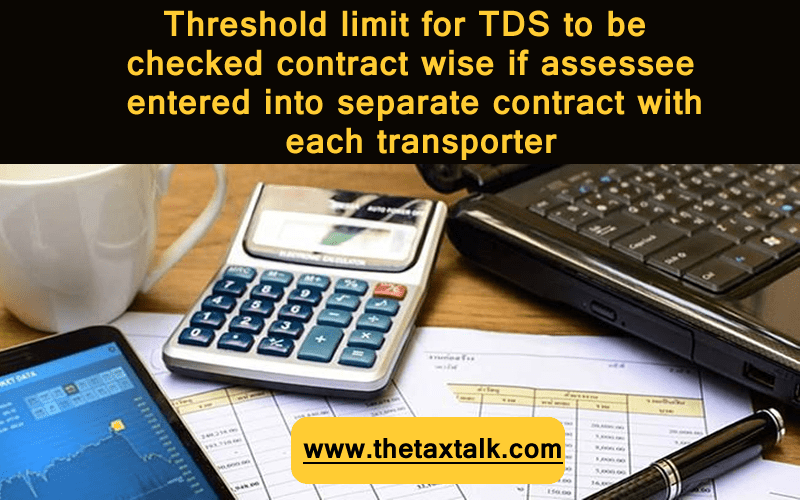 Assessee was a transporter.

During assessment proceedings, Assessing Officer (AO) AO noticed that most of the entries of freight paid by assessee ranged from Rs. 23,800 to Rs. 49,800.

The payment against these expenses was partly made in cash of amounts less than or equal to Rs. 20,000 each.

It was further noticed that these amounts had been credited to account with the different truck numbers, and most of the trucks had been hired only once.

AO further noticed that the assessee had not deducted any tax at source on these payments and made disallowance under Section 40(a)(ia).

Assessee contended that he had no oral or written contract with the truck owners, and every GR was a separate contract.

Since no single payment exceeded the prescribed limit of section 194C, the assessee was not liable to deduct tax at source.

On appeal, Chandigarh ITAT held that there were separate GR’s for every transportation sub-contracted by the assessee.

The AO had noted that a separate truck was engaged in almost all cases of transportation.

There was no finding by the Revenue of any oral or written contract with the sub-contractors for transportation.

Every GR was, therefore, to be treated as a separate contract.

As each such contract was not exceeding the prescribed limit for tax deduction at source, as mentioned in the AO order, assessee was not required to deduct tax at source on the same accordingly.

This judgments is highly relevant and have high practical relevance in view of the fact that the transporter normally don’t agree for TDS on theri amount.