Landmark Judgment : Principle of Natural Justice followed – Trust which substantially satisfied condition for availing benefit of exemption fir the past 30 years could not be denied exemption merely on bar of limitation in furnishing audit report in Form no. 10 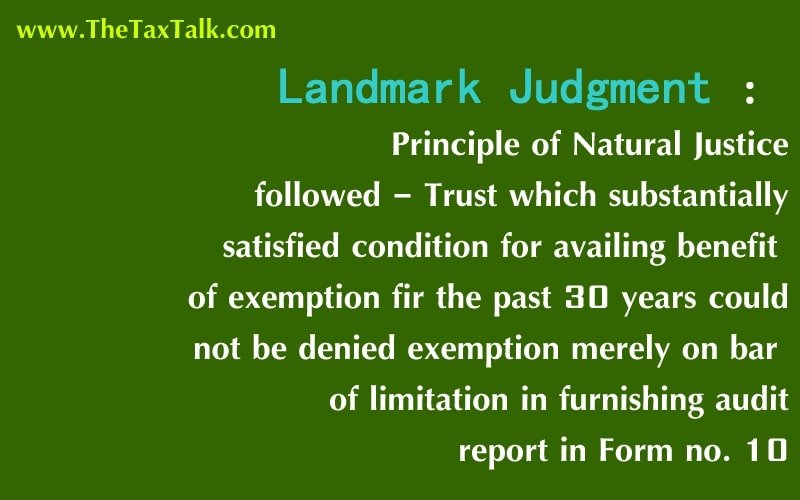 Landmark Judgment : Principle of Natural Justice followed – Trust which substantially satisfied condition for availing benefit of exemption fir the past 30 years could not be denied exemption merely on bar of limitation in furnishing audit report in Form no. 10

Trust For Reaching The Unreached Through Trustee

Sections 11 of the Income-tax Act, 1961
Charitable or religious trust
Exemption of income from property held under (Accumulation of income)
Assessment year 2014-15
Assessee, a public charitable trust registered under section 12A, filed its return declaring income of certain amount
Assessee had not furnished audit report in Form no. 10
Thus, Assessing Officer denied exemption under section 11 to assessee
Thereafter, assessee filed audit report in Form no. 10 belatedly and requested to condone delay
Same was rejected for reason that no genuine hardship was shown by assessee which prevented it from filing Form no. 10
The issue before the court was Whether since assessee was a public charitable trust for past 30 years who substantially satisfied condition for availing benefit of exemption under section 11, assessee should not be denied same merely on bar of limitation, especially, when legislature had conferred wide discretionary powers to condone such delay on authorities concerned
HC Held it as yes at Para 33 of the order. It is finally held In favour of assessee.