Intimation by police do not confer jurisdiction on AO to issue search warrant for any future contingency: HC 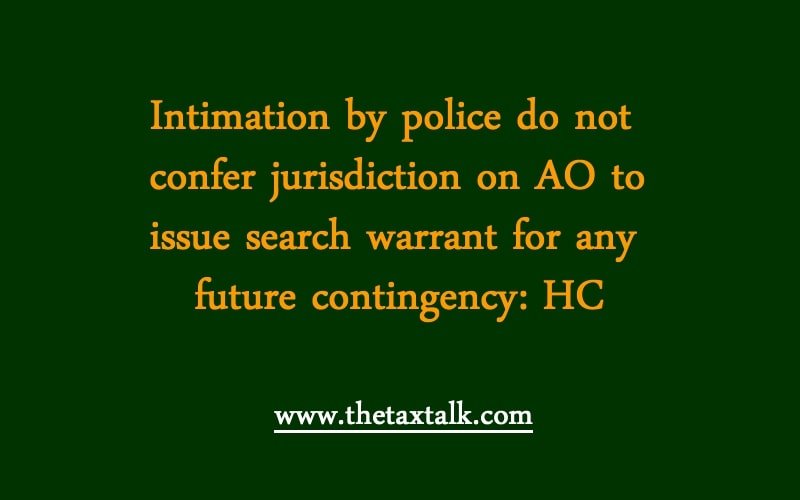 Intimation by police do not confer jurisdiction on AO to issue search warrant for any future contingency: HC

Section 132, read with sections 132A and 132B, of the Income-tax Act, 1961
Search and seizure – General (Warrant of authorization)
Assessee entrusted sum of Rs. 5 crore to its employee in relation to one business transaction in Telangana
Assessee’s employee and his vehicle was detained with Rs. 5 crore cash by Task Force Police of Telangana on 23-8-2019
Task Force handed over said cash to Income-tax department on 27-8-2019
Subsequently on 28-8-2019, revenue prepared panchanama along with affidavit referring to a warrant issued under section 132 for search of a place where employee of assessee was present and cash was seized
Issue was Whether income tax inspection or investigation would be permissible only in respect of a past event and not for possible future contingencies; hence if assessee would disclose, cash of Rs. 5 crore in return of income tax, there would be no basis for retention of cash
Held, yes
Further issue was whether since there was no reason to believe that assessee would not disclose cash transaction, intimation by Task Force police on 27-8-2019 would not confer jurisdiction on revenue to detain and withhold cash by issuance of an invalid search warrant under section 132.
Again it was held as yes.
Whether mere possession of cash of large quantity, could not be said to constitute information which could be treated as sufficient reason, leading to an inference that it was income which would not have been disclosed by person in possession for purpose of Act??
HC held it as, yes
The court concluded that the provisions of sections 132, 132A and 132B could not be invoked in such case.

Tags: Intimation by police do not confer jurisdiction on AO to issue search warrant for any future contingency: HC