If the transaction of sale or purchase takes place when the goods are imported in India or they are being exported from India, no State can impose any tax thereon. 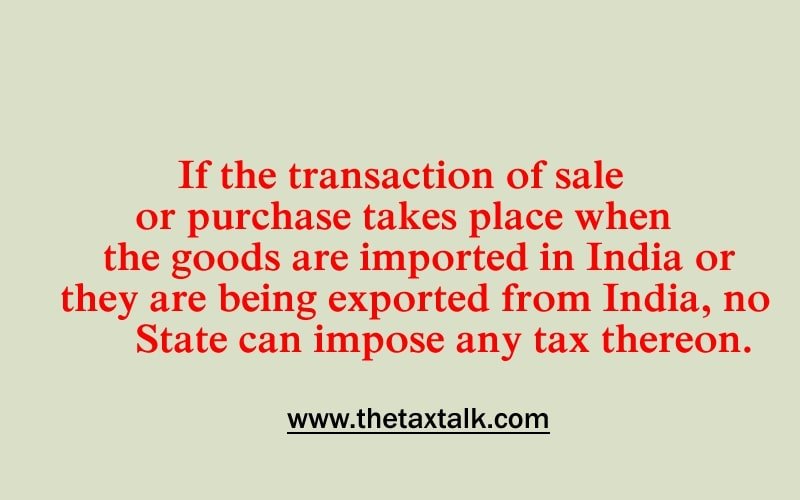 If the transaction of sale or purchase takes place when the goods are imported in India or they are being exported from India, no State can impose any tax thereon.

Assessee filed this petition challenging to orders, whereby plea for refund of the Input Tax Credit was rejected. In writ petition a declaration was sought to effect that CGST Act, 2017, IGST Act, 2017 and KGST Act, 2017 and the rules framed thereunder do not apply to the supply of goods and services effected by assessee in the arrival and departure Duty Free Shops at International Airport in terms of Concession Agreement with a further plea of issuance of direction to authority not to apply the aforementioned Acts to the DFS operated by assessee and to quash order to the extent of levying CGST and IGST on the revenue sharing in terms of the Concession Agreement. Assessee sought quashing of orders, whereby refund already ordered was rejected by authorities.

It is held that  Assessee sold goods to the international passengers, i.e. departing passengers or passengers arriving into India like cigarettes, alcohol, perfumes, chocolates and cosmetics, etc. Invoices issued by DFSs at the time of sale of goods to outgoing passengers are duly signed by both passengers and the cashier. All the goods which are sold at DFSs are either imported or purchased from Indian market and are stored in a customs bonded warehouses and are removed from such warehouses only under the supervision of Jurisdictional Commissioner, thus, for all intents and purposes goods are not sold for domestic purposes. If the transaction of sale or purchase takes place when the goods are imported in India or they are being exported from India, no State can impose any tax thereon. It is also not in dispute that all DFSs were situated at international airports, which were beyond the customs frontiers of India and would not be within the customs frontiers of India. Therefore, GST would not be applicable and petition was allowed.

Respondent by: R1 By Advocate P. Vijayakumar, ASG of India R2 by P.R. Sreejith, SC, Central Board of Excise and Customs

All the seven writ petitions are being disposed of with this common judgment as they arise out of the same cause of action.

Sales to international passengers are generally made against payment in foreign currency and upto the limit prescribed by the Reserve Bank of India in Indian currency. Every sale at the DFS located at departure terminal is covered by sale voucher (deemed to be a shipping bill under section 69 of the Act of 1962) and these transactions are carried out according to the guidelines issued by the Department of Customs from time to time. As per section 2(11) of the Act of 1962, all duty free shops in India are Customs Area, which include a warehouse and customs station. The products, which are brought from foreign suppliers and brought into India are kept in custom bonded warehouses and are transferred to DFSs situated at the airport as and when stocks are needed. The aforementioned activities are carried out under supervision of Customs Authorities and the petitioner has no access to the products without permission/leave of the Customs Authority. In other words, products have not crossed the customs frontiers of India.

Despite having given detailed reply to the show cause notices and after having been granted refund, the impugned orders are not sustainable, for, the judgments rendered by the High Court of Bombay in Sandeep Patil’s case (supra) and Flemingo Travel Retail Limited and another v. Union of India and others passed in Writ Petition No. 1511 of 2019, dated 7-10-2019 : 2019 (31) GSTL 398 : 2019 TaxPub(GST) 1036 (Bom-HC) have been accepted by the Government to be final having chosen not to prefer an Special Leave Petition (SLP) before the Hon’ble Supreme Court of India. The goods sold at DFSs if do not attract imposition of any import duty on a duty free operator, the question of accessibility under GST regime introduced with effect from 1-7-2012 is also not applicable.

The stand of the State by relying upon Circular No. 106/25/2019-GST, dated 29-6-2019 introducing rule 95-A of CST Rules, 2017 confining the benefit of non-accessibility of GST to sale and supply of services to the passengers at ‘departure’ only cannot be read in a restricted term, in view of the definitions of taxable territory as well as ratio decidendi culled out in Sandeep Patil’s case (supra).

It is a matter of record that the petitioner(s) sell goods to the international passengers i.e. departing passengers or passengers arriving into India (arriving passengers) like cigarettes, alcohol, perfumes, chocolates and cosmetics etc. The expressions ‘import’ and ‘export’ defined under Customs Act, 1962 have been identically defined in IGST Act, 2017. Invoices issued by DFSs at the time of sale of goods to the outgoing passengers are duly signed by both the passengers and the cashier. No doubt, it envisages a condition that the passenger will not consume the goods until he lands at the final destination outside India. In other words, the passenger shall become owner of the goods only upon reaching of final destination. The contents of invoices have already been extracted in paragraph 6 of the judgment rendered in Sandeep Patil (supra). It is a matter of record that all the goods which are sold at the DFSs are either imported or purchased from Indian market and are stored in a customs bonded warehouses and are removed from such warehouses only under the supervision of the Jurisdictional Commissioner, thus, for all intents and purposes are not sold for domestic purposes. The goods which are brought from customs warehouses do not cross customs frontiers, thus, before the goods are imported in the country, they had been sold at DFSs.

’16. There is no merit in the submission of the respondents that although the Customs Act treats the sale at DFS as export, the same cannot be ipso facto applicable under the GST Laws. Paragraph 4 of Circular No. 106/245/2019-GST : MANU/GSCU/0033/2019, dated 29-6-2019 issued by the Central Board of Indirect Taxes and Customs…… GST Policy Wing of ministry of Finance, Government of India clearly shows that since the procedure for procurement of imported/warehoused goods is governed by the Customs Act, the procedure and applicable rules as specified under the Customs Act are required to be followed for procurement and supply of such goods. Under section 2(4) of IGST Act, ‘the customs frontier’ means the limits of customs area as defined in section 2 of the Customs Act, 1962. The DFS located in the customs airports and special warehouse will thus form part of the customs area as defined under section 2(11) of the Customs Act.

This position has been affirmed by the Supreme Court by rejecting the writ petition filed against the central government order, vide an Order, dated 10-5-2019 passed Writ Petition (C) No. 564 of 2019 titled as Aarish Altaf Tinwala v. Union of India.

’21. Section 2(5) of the IGST Act defines ‘export’ to mean ‘taking goods out of India to a place outside India’. In view of the above we are satisfied that supply by the DFS of the Petitioner to the outbound passenger constitutes exports by the DFS. Consequently, in terms of section 16(1) of the IGST Act, it becomes a zero rated supply.

Tags: If the transaction of sale or purchase takes place when the goods are imported in India or they are being exported from Indiano State can impose any tax thereon.